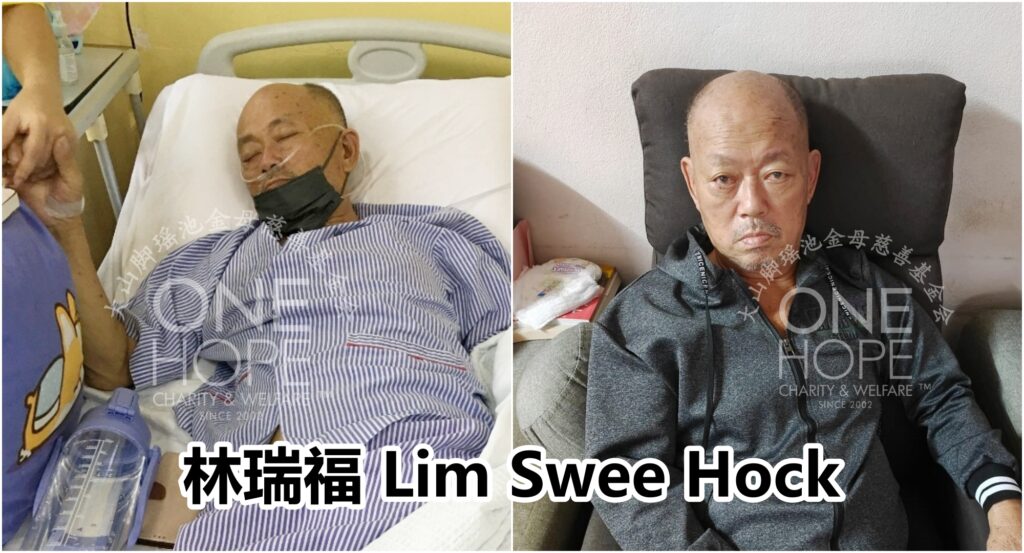 "If I recover, I still want to work and contribute to society, so I hope you can help me!"

63-year-old fisherman Lim Swee Hock had terminal lung cancer, and the cancer cells had spread to his brain. He was once in critical condition until he started targeted therapy about one year ago. He "earned" more time with his family, and his medical condition has gradually improved. He can now eat and drink and even walk and care for himself.
11
He looks forward to having grandchildren and hopes to contribute to society after he recovers, so he pleads with the public for the second time to help him with the shortfall of RM55,000 for his medication to prolong his life.

【The fisherman sold his fishing boat for medical treatment, and his condition improved significantly. His four filial children were thrifty to save as much money as possible to buy medicine for their father, but they are short of RM55,000】

Swee Hock from Tanjung Piandang, Perak, was diagnosed with lung cancer, and it has spread to the brain. The tumour in his brain was too big and pressed on his nerves, resulting in difficulty in moving and speaking. However, he was unsuitable for surgery and chemotherapy, so the doctor suggested taking oral precision medicine to shrink the tumour.

Swee Hock was originally bedridden, couldn't eat, was coughing and wheezing, and was referred to the hospice ward. After taking medicine for a week, he could get out of bed, walk, eat and care for himself. He can now speak clearly and reason. His face complexion is also ruddy. The doctor was surprised when he visited the hospital for a follow-up visit.

Swee Hock needs more than RM100,000 for a year's medication. His four filial children were thrifty to save as much money as possible, and they also borrowed money from their friends and relatives. However, they could only afford half of the medical bill, and there was still a shortfall of RM55,000.

Unfortunately, he sold his fishing boat to pay for his medical examinations and hospital expenses last year, so he can no longer go fishing. His 63-year-old wife, Lai Hoong Chin, helps people to peel shrimp for extra income for the family. The couple has four children, all working for the others. They share their parent's living expenses and can only afford half of their father's medical bill; hence, they seek help to pay off the remaining fee.

The family pleads for public assistance so that Swee Hock can continue with the treatment to prolong his life. He hopes to recover so that he can give back to society.

After reviewing the case following a home visit, One Hope Charity decided to assist in raising RM55,500 for his medical fees. His family agreed to fully authorise One Hope Charity to take charge of the fundraising and collect the donations from the well-wishers on their behalf. For questions, call One Hope Charity's hotline at 016-419 2192 or 019-232 2192.