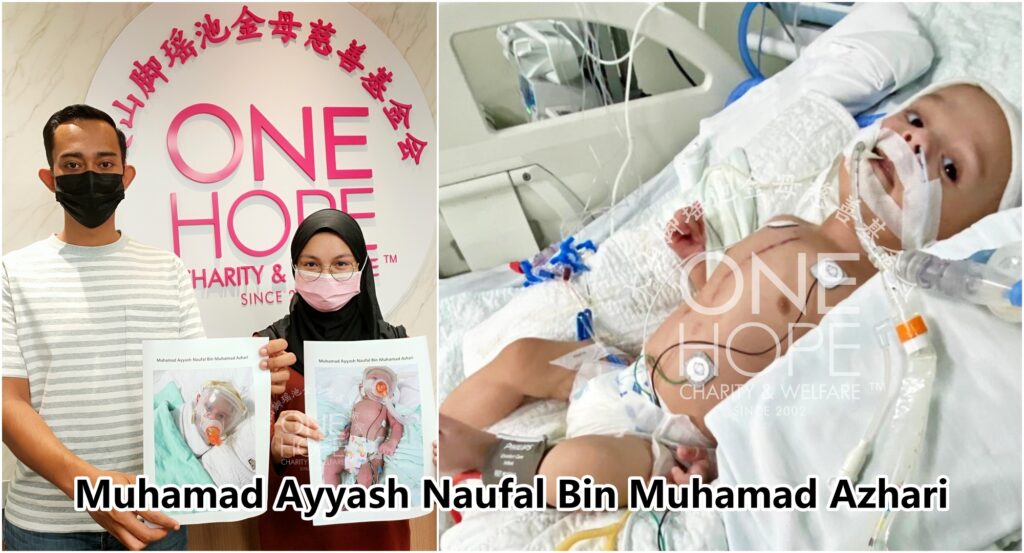 *A total of RM25,000 from the “Emergency Medical Reserve Fund” has been channelled; hence, One Hope Charity will only launch fundraising of RM60,000 for this case.*

A 5-month-old baby boy is in critical condition due to a deflated heart valve. He is currently in the intensive care unit awaiting emergency surgery. Please assist him!

Muhamad Ayyash Naufal, five months old, had a heart operation two months ago and returned home to be with his parents. However, on Sunday (4/12/2022), he experienced sudden shortness of breath, which alarmed his parents.

His parents rushed him to the hospital. He was immediately taken to the intensive care unit and placed on a breathing machine after the doctor examined him. The doctor confirmed that the leak of the small heart valve necessitated emergency surgery; otherwise, he would face a life-threatening crisis.

The baby boy survived on a breathing aid. The parents became panicked and choked up, and they sought assistance from One Hope Charity. They are hoping that the public will donate to help save their child.

【The baby boy underwent cardiovascular surgery on September 28, but the valve has since deflated, necessitating another procedure to keep him alive】

Muhamad Ayyash Naufal from Bukit Mertajam, Penang was born in July. He had shortness of breath and asthma when he was one month old. His parents took him to the doctor. When the doctor discovered that the patient's condition was serious, he was referred to the hospital for further evaluation.

A swollen heart was discovered in the baby boy, and he was diagnosed with an abnormal left coronary artery originating from the pulmonary artery (ALCAPA), a rare congenital heart disease and in order to repair the atrial septal defect (ASD) and patent foramen ovale (PFO), the baby boy must be operated on as soon as possible before the heart fails. In September, One Hope Charity launched a RM90,000 fundraising campaign to cover the operation fee.

The baby boy's heart repair surgery for cardiovascular stenosis was scheduled for September 28 by the doctors. He was released on October 13 after the procedure, which went well.

However, on December 6, the parents returned to One Hope Charity in a depressed state, begging for the baby's second operation fee. The operation this time must repair the leaking heart valve. If the operation is carried out, there is still hope. The little life will be in danger at any time if there is no operation.

Father Muhamad Azhari bin Azmi (27 years old) is a technician in the Air Force who works at the Butterworth Air Force Base and earns RM2,800 per month. Mother Nur Alya Natasha bt Mohd Yusoff (25 years old) was a bank teller before giving birth and taking two months of unpaid leave to care for her child.

After reviewing the case, One Hope Charity decided to assist in raising the medical expenses little Muhamad Ayyash Naufal needed. His family agreed to fully authorise One Hope Charity to take charge of the fundraising and collect donations from the well-wishers on their behalf.