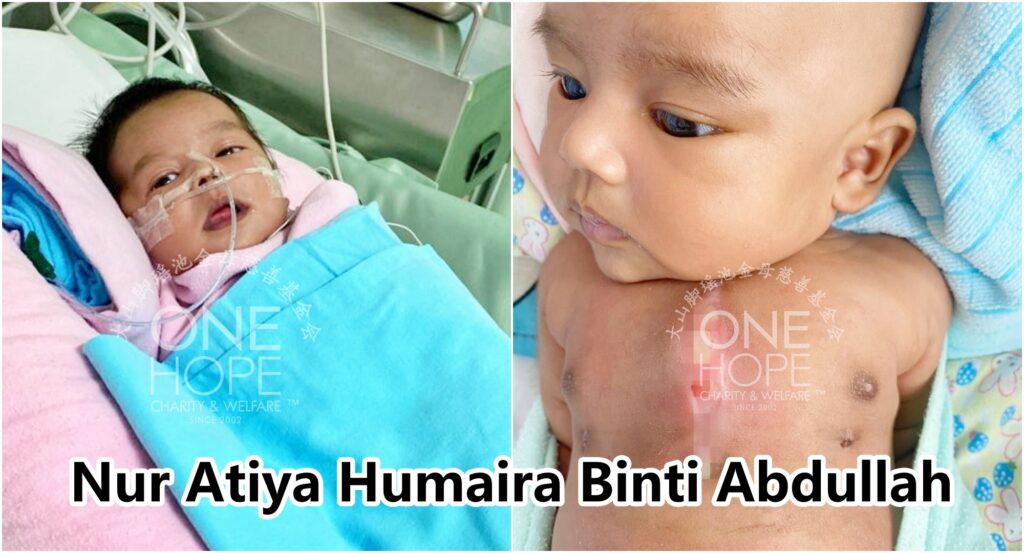 Two months old baby girl Nur Atiya Humaira Bt Abdullah underwent surgery last month to get rid of her congenital heart disease, but the joy for her first-time parents did not last long. The baby girl had repeated fever and was sent to the hospital for examination, where the doctor discovered that the surgical wound on her chest was inflamed and showed signs of bacterial infection.

The baby girl is from Teluk Kumbar, Penang. She developed a fever two weeks ago and was sent to a nearby hospital for treatment. She was later referred to Penang Hospital and was admitted for almost two weeks. As the inflammation of the baby’s wound worsened, the doctor referred her to a cardiologist to manage the wound.

The baby girl’s wound dehisced and severely inflamed. The doctor told the parents that if she did not receive immediate treatment, the bacteria would attack her heart, and the baby girl would die. However, the surgery cost RM40,000, and the anxious parents were at a loss. Hence, they approached One Hope Charity for help.

Her 21-year-old father Muhammad Hakimi Bin Mat Isa is a motorcycle repair mechanic with a monthly salary of RM1,000. Her 19-year-old mother Nur Salwani Natasha Binti Mohd Zarihan was a hawker before she became pregnant, but she stopped working after marriage.

【The baby girl was cyanotic after birth. At first, everyone thought that her skin was dark. It was not until she suffered from shortness of breath and examination showed that she had heart disease】

The baby did not show abnormality during her mother’s prenatal check-ups at the early stage of pregnancy. At the 26th week of pregnancy, the fetus was found in a breech position and did not return to the natural birth position before delivery. Therefore, the doctor had to take out the baby girl by caesarean section. The baby was born at full term on 30 August and weighed 3kg.

The baby girl was born with cyanosis and was diagnosed with transposition of the great arteries (TGA) and patent ductus arteriosus (PDA). She underwent a balloon atrial septostomy (BAS) right after birth and relied on a breathing aid to survive. She needed an arterial switch operation (ASO) and repair of her atrial septal defect (ASD) and patent ductus arteriosus (PDA). Without the surgery, the baby girl would not survive for more than half a year.

One Hope Charity assisted the baby girl in raising funds for her surgery in September, which was carried out on 4 October. After she passed the critical period, she was discharged from the hospital on 12 October and reunited with her family. She was normal, and her entire family was thrilled. Unexpectedly, the baby girl had wound inflammation and bacterial infection, which threatened her life again.

The baby girl has gotten a chance to survive and shows a strong vitality. However, her life is at risk again now, so her family is hoping for help from the public to get through this challenging moment.