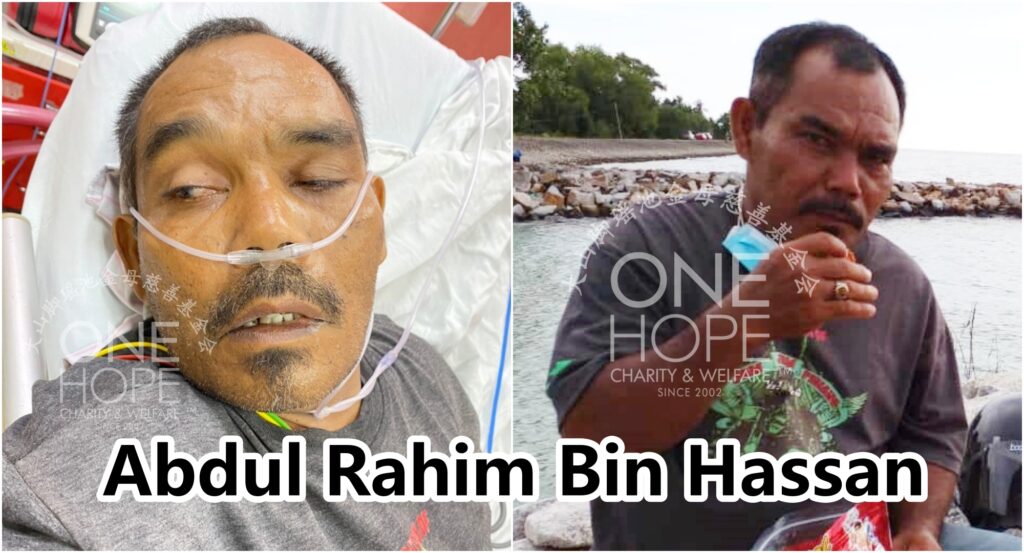 A head of the family was busy working to make more money before the Hari Raya celebration. Unexpectedly, he collapsed in front of a traffic light and was sent to the hospital for examination. He was later diagnosed with a stroke and needs to undergo a life-saving surgery within the golden window.

In order to earn money to support his family, 55-year-old man Abdul Rahim Bin Hassan rides on a motorcycle to travel from Bagan Serai in Perak to Bukit Mertajam in Penang several days in a week for work. The journey takes more than an hour but he never complained about it. He hopes to earn more money so that he can provide a better life for his family.

He is an odd job worker at a construction site. He has been working tirelessly in order to earn more money for the family for the upcoming Hari Raya Aidilfitri. He has always had high blood pressure but he ignored his physical condition. And now, he collapsed and was diagnosed with a stroke. His wife and 18-year-old son, who is still studying are helpless, and they are unable to afford the RM50,000 in medical expenses, so they begged the public for help.

【His blood pressure suddenly raised beyond the normal index three days ago. He went to see the doctor at a clinic. After taking medicine, his condition was stable. Unexpectedly, he collapsed and suffered a stroke】

Abdul Rahim from Bagan Serai in Perak lives in rural area. He works as an odd job worker at the construction site, earning a daily wage of RM100. Before the pandemic, he could bring home about RM1,500 a month to support his family.

Since the movement control order (MCO), he was forced to work at the city with better work opportunities so he travels in motorcycle from his hometown in Alor Pongsu to Bukit Mertajam for work. Although the journey is long, and he has to brave the uncertain weather, but he still manage to support his family with the help of his friends.

On Tuesday, 19 April, he suddenly felt unwell. His wife brought her to a clinic and he was told that his blood pressure had soared. After taking medicines and recuperated for a few days, his condition resumed back to normal. Two days later, he rode a motorcycle to his sister’s house in Bukit Mertajam, and he also checked with his friends about his work progress. Unexpectedly, at around 9am before arriving at his sister’s house, he collapsed at a traffic light and became unconscious.

His 50-year-old wife Salasiah Binti Nasri received a call from the hospital at around 11am on 21 April, and she was told that her husband suffered a stroke. She was in a complete shock. Her relatives sent her to Seberang Hospital to understand about her husband’s condition, and she was very helpless as she is unable to afford the huge amount of medical expenses. She cried, and later she approached One Hope Charity for help.

His wife is a housewife, and the couple have a 17-year-old son, who is in Form Five. The family of three lives in a shabby house, and they have no car. They only have two motorcycles.

The wife cried and said that they are celebrating Hari Raya soon, and the husband kept saying that he had no money and wanted to find a job for the celebration, so he worked very hard to earn money. Unexpectedly, her husband suffered a stroke. Her family is poor, and they have no extra money for the medical expenses.

This is an urgent case. One Hope Charity urgently reviewed the case after receiving the help request, and decided to help  Abdul Rahim Bin Hassan to raise the RM50,000 in surgical fee, hoping that he can be saved.