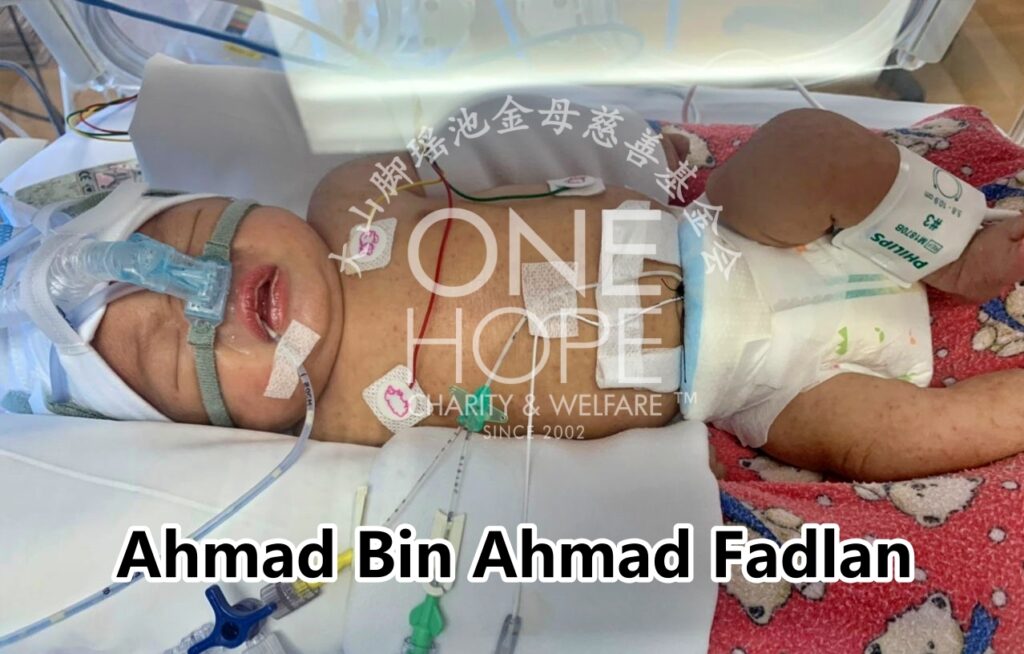 The doctor found out that the baby boy suffered from pulmonary edema and lung infection when he was born and requested the new born to be stayed in the neonatal intensive care unit for at least two weeks. The medical fee is RM40,000, which is an amount his parents could not afford. They hope that the generous public could help them to save their baby boy.

Called by the name of Ahmad, the baby boy from Perak was born on September 7 at Ipoh Hospital. However, his body was covered with red spots when he was born, and the doctor found out that he has lung infection during a check, and requested him to stay at the neonatal intensive care unit for antibiotic treatment.

His mother Nurul Aimi Binti Subki Latif was normal during her pregnancy and the medical checks did not show anything abnormal. She was excited to welcome her first baby with the husband. However, when the baby boy was born, he was rushed to the incubator due to pulmonary edema and bacterial infections. The mother did not have a chance to touch her new born, and could only see her baby through the incubator.

The doctor expects that the new born has to stay in the incubator for treatments for two weeks, until his lungs are fully developed. Otherwise, his life might be at risk. The baby’s parents could not afford the medical fee and came forward to One Hope Charity, hoping that One Hope Charity could help them in raising the RM40,000 medical fee.

His 41-year-old father Ahmad Fadlan Bin Mohd Tajuddin is a civil servant. After deducting the EPF and Socso, he brings home about RM4,000 a month. He and his late wife have six children aged 16, 14, 13, 12, 11 and 6, and this baby boy is the first baby of him and his 29-year-old wife Nurul Aimi Binti Subki Latif, who is a housewife.

After reviewing the case, One Hope Charity decided to help this family to raise the RM40,000 medical fee the new born needs for his treatments in the neonatal intensive care unit.

The family members agreed to authorise One Hope Charity to take charge of the fundraising and collect donations from the well-wishers on their behalf.