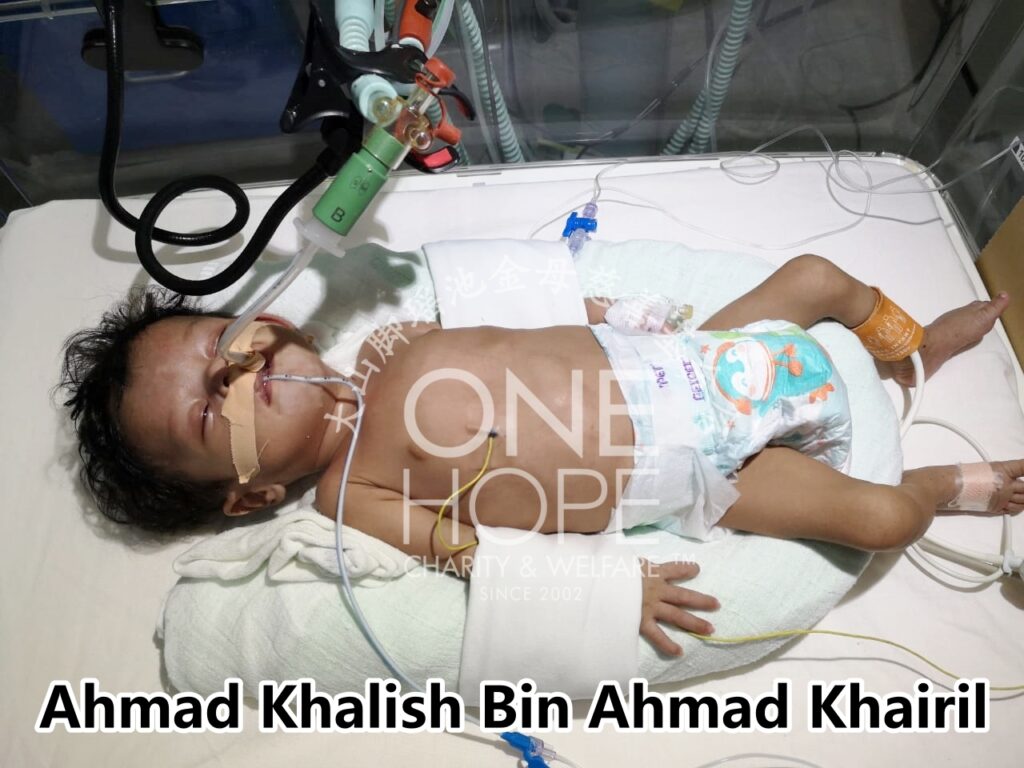 The baby boy looked normal when he was born, and he was taken home by his happy parents after being discharged from the hospital. He was blessed to have a grandfather and a pair of twin sisters who gave him a lot of love. However, he was diagnosed with serious heart disease when he was two months old. Due to his unstable condition, his surgery was postponed three times. However, the baby who has been in the intensive care unit for a month is now suitable to undergo the surgery. Unfortunately, the parents cannot afford the huge amount of surgical fee and they plead for public donations to save their newborn boy.

When he was two months old, baby Ahmad Khalish Bin Ahmad Khairil from Padang Serai in Kedah, had his routine check-up at a clinic. The doctor found out that he had shortness of breath and referred him to the hospital for a thorough examination. He was then diagnosed with serious heart disease, namely transposition of the great arteries (TGA), ventricular septal defect (VSD), atrial septal defect (ASD), and patent ductus arteriosus (PDA).

Due to his serious condition, he was sent to the intensive care unit for treatment and observation. The baby boy was supposed to prepare for his surgery, but the surgery was postponed three times because his condition was unstable. As he was in an emergency condition, the baby boy was referred to a specialist hospital for surgery and he is in urgent need of RM90,000 surgical fee.

【The baby experienced bacteria infection twice, and later was tested positive for Covid-19. The surgery could not be done as planned but the baby boy is very resilient and he never gives up】

Baby Ahmad Khalish’s mother suffered from gestational diabetes mellitus during pregnancy. During a check-up, the doctor told the mother that the baby was in good condition and no abnormalities were detected.

When the baby was born in July, the doctor did not detect any problem with him, but when he was two months old, the doctor found out that he had shortness of breath during a routine check-up in the hospital. He was admitted to the hospital for observation and examination, but his condition deteriorated, and he was sent to the intensive care unit. He relied on the breathing aids and was unable to be discharged from the hospital.

Now the baby boy has been in the intensive care unit for almost a month, and he needs surgery urgently. The doctor said that if the surgery is not performed, the baby’s heart will gradually fail. The news shocked the parents and they have nowhere to ask for help, so they turned to One Hope Charity for assistance.

Baby boy’s 33-year-old father Ahmad Khairil Bin Kamis is a lorry assistant, earning about RM1,400 a month. His 28-year-old mother Nor Ain Binti Salleh is a housewife. The couple also has a pair of five-year-old twin daughters. Their cost of living is high, and they are unable to pay for their son’s surgery.

After reviewing the case, One Hope Charity decided to assist the baby boy. The family also agreed to authorize One Hope Charity to take charge of the fundraising and collect donations from the well-wishers on their behalf.