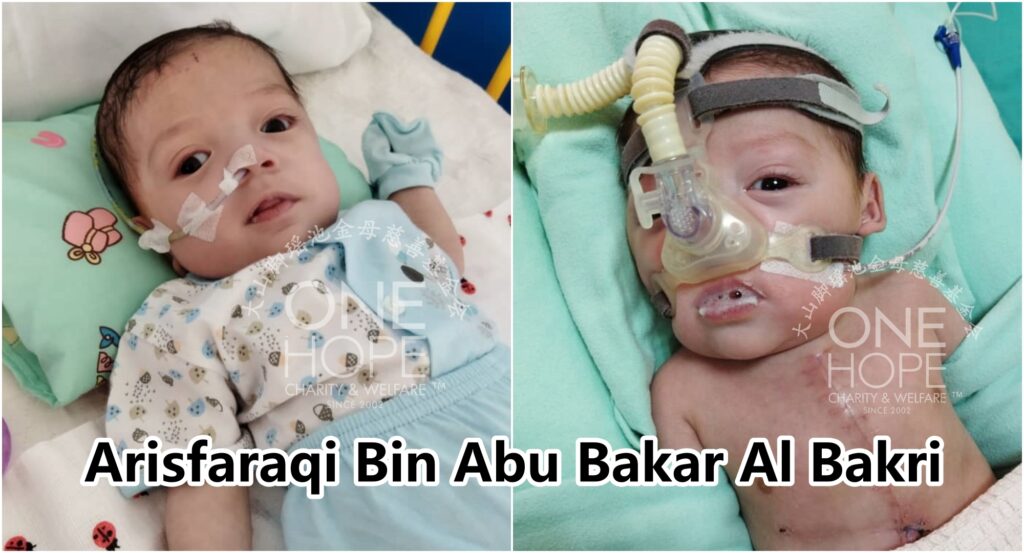 Arisfaraqi Bin Abu Bakar Al Bakri's mother developed high blood pressure and gestational diabetes during pregnancy, forcing her to have a cesarean section when the fetus was not fully developed, and the mother fell into a coma due to a lack of oxygen.

When she awoke in the intensive care unit, she was told that her son had pulmonary atresia with interventricular septum integrity (PA-IVS), a narrowing of the cardiovascular system, and one large and one tiny lung that were underdeveloped. He only can stay in the neonatal intensive care unit's incubator for a short time, relying on breathing machines.

Arisfaraqi's mother stated,  "I had a prenatal check-up, but the baby was not checked for heart problems at that time. He was not diagnosed with heart disease until two days after his birth."

His mother is a housewife and receives a monthly allowance of RM650 from JKM. His father, Abu Bakar Al Bakri Bin Mokhtar, is a 61-year-old prayer caller in a mosque with a meagre RM550 monthly income.

The other three brothers and sisters are still enrolled in primary and secondary schools, while the two older brothers of Arisfaraqi have only recently begun working. In addition to daily living expenses, they must pay the house rent, which is simply insufficient to cover Arisfaraqi's exorbitant surgery fee.

The parents had already depleted their savings for the child's first surgery and had to borrow money from relatives and friends. Arisfaraqi's postoperative condition was poor, and he was forced to stay in the hospital for up to a month for observation. He couldn't leave the hospital until July of last year.

【He is overjoyed and has cyanotic lips and nails】

When Arisfaraqi, who is now two years old, is active or agitated, he will turn his lips and nails cyanosis, wheeze louder, and even vomit. In addition, due to his premature birth, his right eyeball was tilted, and he required regular hospital follow-up.

The doctor revealed that Arisfaraqi had to complete 3 operations, and the upcoming second operation is the left B-T shunt operation (Left Blalock Taussig Shunt) to repair the heart problem, and the operation fee was RM40,000. The cost is astronomical for family members with a poor family background and low income.

"Doctors said that without surgery, his breathing and growth would be affected."

After a home visit and review, the foundation decided to assist them in raising RM40,000 for medical expenses for Arisfaraqi, so that the child can arrange surgery as soon as possible and grow healthily.

Family agrees to allow ONE HOPE CHARITY to take charge of the fundraising and at the same time, accumulating the donations from the public. For questions, call One Hope Charity's hotline at 016-419 2192 or 019-232 2192.