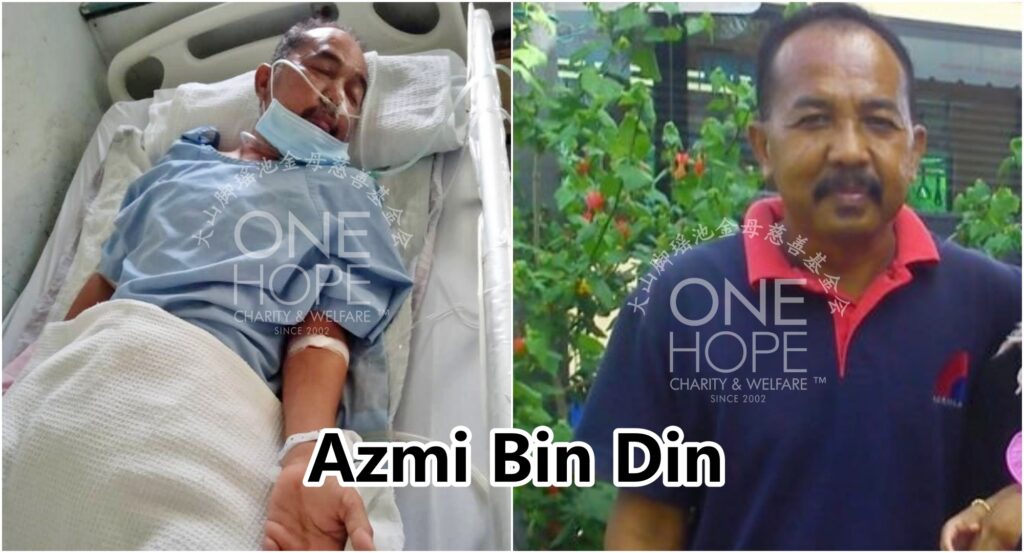 A 56-year-old hawker, who worked hard for his family, struggled to survive even when he was sick. A few days ago, he suddenly became weak and lost his consciousness. He was rushed to the hospital for examination, and he was diagnosed with a stroke. He urgently needs RM40,000 for his treatment expenses.

56-year-old man Azmi Bin Din from Nibong Tebal in Penang, used to work as a farmer. He later became a food premise operator after his physical ability deteriorated. He runs a food premise with his wife and youngest son. He can barely meet the living expenses and turnover every month.

A few days ago, he went to the market to purchase cooking ingredients as usual and he returned to the food premise to prepare the soup. When he was about to go home for a short rest before starting his daily business, he was found weak at around 2pm. He was unable to speak and had lost his consciousness so his family members called an ambulance to rush him to the hospital.

Preliminary examination revealed that he had a stroke and needed to be transferred to a specialist hospital for surgery. His family is unable to afford the medical expenses, hence they approached One Hope Charity for help. One Hope Charity reviewed the emergency case immediately and decided to raise RM40,000 for Azmi’s surgical fee, as well as the formula milk powder, diapers and other expenses that are needed after he is being discharged from the hospital.

Azmi experienced chest pain a few years ago, and he also had swollen kidney since a few months ago. However, he was stubborn and did not want to make his family worried, so he insisted not to go to the hospital for check-up or receive any treatments. In order to support his family, he continued to work and runs the food premise.

Unexpectedly, he collapsed a few days ago. After examination, the doctor found out that he had symptoms of stroke and needed a surgery to remove the blood clot within the golden window; any delay would lead to death or even lifelong paralysis. After receiving the case, One Hope Charity quickly approved it, and the arrangements for the patient to be transferred to a specialist hospital for surgery was done as soon as possible.

Azmi Bin Din divorced his ex-wife many years ago due to some misunderstanding, and his ex-wife has remarried. Although he has divorced, Azmi has still fulfilled his duties as a father over the years and take care of his children wholeheartedly. Azmi and his ex-wife have six children, but all of them are from the working class and are unable to afford their father’s medical expenses.

Azmi runs a food premise with his second wife and raises his six-year-old daughter. He earns about RM1,800 a month, after deducting the expenses and salaries, he did not have much money left.

This is an urgent case. After reviewing the case, One Hope Charity decided to help Azmi Bin Din to raise the medical expenses he needed. His family agreed to fully authorise One Hope Charity to take charge of the fundraising and collect the donations from the well-wishers on their behalf.