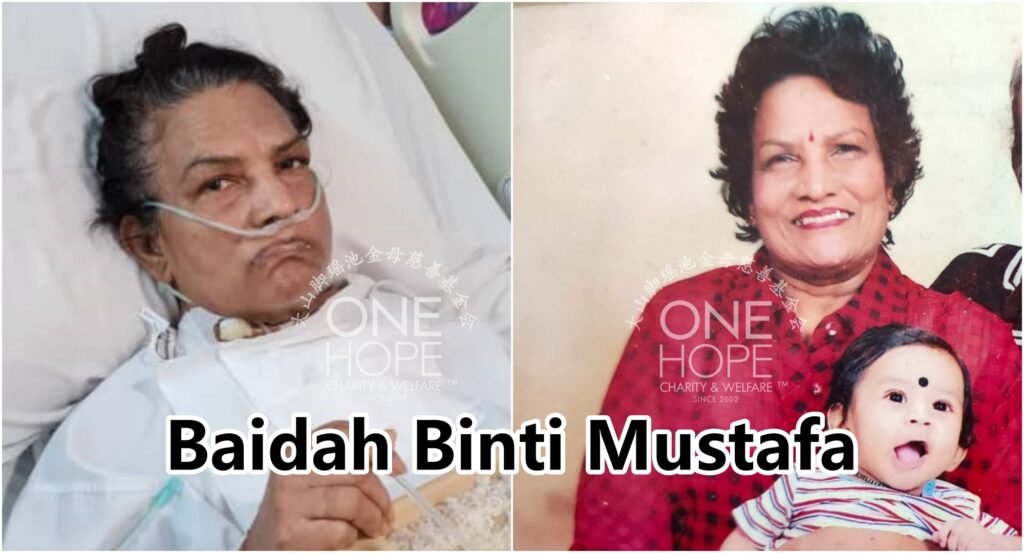 An Indian Muslim who has had a rough life since she was a child, experienced so much hardships in life. She thought that she can now enjoy her twilight years, but unexpectedly, she was diagnosed with severe heart vascular blockage. She needs to undergo a heart bypass surgery, but she is still short of RM27,000. Her family is unable to afford the amount, hence she hopes that the public can help her through this difficult time.

68-year-old Indian Muslim woman Baidah Binti Mustafa from Penang Island has lost her father when she was a child. At a young age, she wandered around on streets with her mentally ill mother, and they often did not have enough food. A Chinese family felt sad for her and decided to adopt her.

Baidah was brought up in the Chinese family. After she grew up, she got married and now, she is already a grandmother. A few years ago, she suffered from a heart disease, and she started to go for regular follow-up visits since then. The doctor only gave her medications to control her condition.

On the evening of 5 March, she had difficulty in breathing, she immediately took a nitroglycerin to relieve the discomfort, and her condition finally improved. Unexpectedly, she felt unwell again the next night, and her family sent her to a nearby clinic for examination immediately.

After an examination at the clinic, it was found that her blood oxygen was very low, and her condition was critical. In order to make sure that she was safe, the doctor recommended to send her to a hospital for a detailed examination. The result showed that her heart disease was very serious and many of her major blood vessels were blocked. She needs to undergo a bypass surgery. The surgical fee and medical expenses cost RM77,000. The doctor also suggested her to stay in the hospital until the surgery due to her serious condition.

She is still short of RM27,000 in medical expenses, and her family can no longer afford it. Her grandchildren approached One Hope Charity for help with the hope to save their grandmother.

After a home visit, One Hope Charity decided to help Baidah Binti Mustafa in raising the shortfall of RM27,000 in medical expenses. Her family agreed to fully authorise One Hope Charity to take charge of the fundraising and collect the donations from the well-wishers on their behalf.