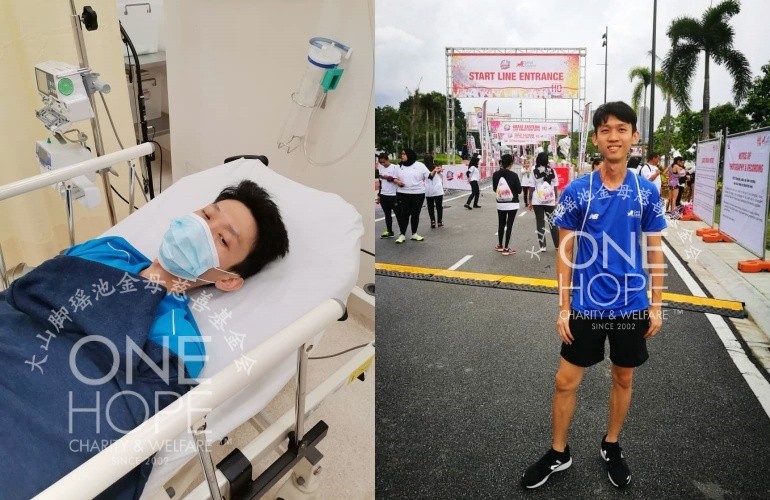 Just as a 28-year-old ready to step into the workforce, he was diagnosed with a tumour on his spine. He urgently needs to undergo surgery to remove the tumour, or else he will gradually paralysed. However, he is still in need of RM40,000 for the surgery, and hopes that the donations could get him back up on his feet.

Chai Kian Yee had been working abroad and returned back to Terengganu in order to step into his career field, but was unfortunately diagnosed with a tumour on his spinal cord. He needs to have his tumour surgically removed as soon as possible to prevent his body to be completely paralysed. His parents have approached One Hope Charity in hopes to raise funds of around RM40,000 for his surgery, so that he could get back up his feet to contribute to society.

In November 2019, Chai successfully received a permit approval to work in New Zealand. Hence he flew to New Zealand for his work and vacation trip and by November 2020, he returned back to his hometown carrying a fruitful of job experience along the way.

After set foot in Malaysia, he underwent quarantine in line with the standard operating procedure, and reunited with his family after the quarantine period. Since then, Chai has been actively looking for a job in hopes to find a suitable one to put his passion into play, as well as to prepare for his future.

However, his grand plan on job seeking was ruined after he felt a sudden sharp pain on his spine. Around 3 months ago, he kept feeling that pain, but he thought it was only just a sore ache. He went to seek a Chinese medicine doctor for the massage treatment, which has shown signs of recovery.

But shortly afterwards things went from bad to worse. The pain in his spine got worse, to the point he could not sit or stand without feeling the pain. His parents took him to a specialist hospital for medical examination and the doctor found a tumour on his T12 vertebrae, which has been causing the pain.

The doctor recommended him to undergo surgery for his tumour to be removed, as well as disinfection of the area near T12 vertebrae, before implanting a vertebral body cage.

Because the T12 vertebrae consists of numerous nerves, the surgery is a very difficult and complicated task, but if Chai do not undergo operation, he will gradually become fully paralysed, then the cancer cells would spread throughout other parts of his body, which can be life threatening.

The surgery fee is around RM80,000 but he only manages to pay half of its total fee which earned from his overseas job and loans from his family and friends. He still needs RM40,000.

As the surgery is urgent, he could not miss out on the critical opportunity to have his tumour removed before his tumour became more and more severe. He and his family hoped that the One Hope Charity could help them raise funds through public donations to cover the rest of his surgery fee.

His 60-year-old father is a kidney patient and is undergoing dialysis while his mother works as an administrator staff. Due to MCO, her income dropped to RM1,500. His elder brother is a salesperson who has a monthly income of RM3,200 and his younger sister works in a hotel with a mo that income of around RM2,200.