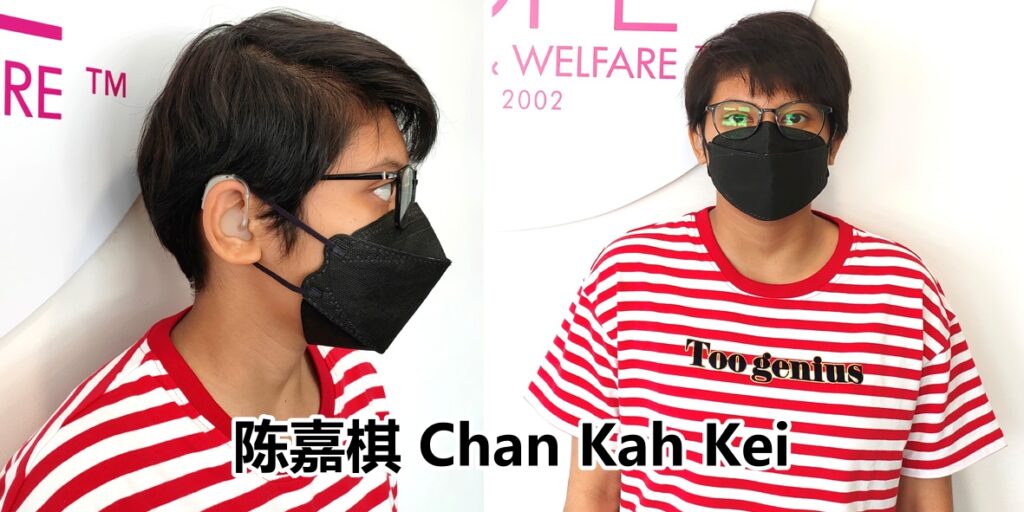 An 18-year-old girl with binaural hearing loss was abandoned by her parents since she was a child. Fortunately, she was adopted by a kind woman since then. Her adoptive mother has tried to apply for her citizenship for many years but to no avail. And now, her hearing in the right ear has deteriorated severely, and she must undergo a cochlear implant surgery. She can’t wait for her citizenship before she goes for the surgery. She is now a non-citizen, and she hopes that the public can help her with the shortfall of RM89,000 for her cochlear implant surgery.

Chan Kah Kei from Kampar in Perak was born in Malaysia, but her birth certificate was inexplicably confiscated by the relevant authority when she tried to apply for her MyKad at the age of 12. She has lived as a non-citizen ever since. Kah Kei was abandoned by her biological parents at her baby sitter’s house when she was still a baby. After that, she was adopted and raised by a kind-hearted woman Wong Soon Chong, who is now 53.

Kah Kei was diagnosed with binaural hearing loss when she was a child. When her adoptive mother learned about her medical condition as well as the surgery and medical treatment needed in her upcoming days, the adoptive mother started to apply for Kah Kei’s citizenship, with the hope that she could enjoy the medical benefits as a citizen.

However, Kah Kei is now 18 years old but her citizenship application is still a long way off, and the hearing loss in her right ear has deteriorated, and the hearing aid could no longer work for her. Therefore, the doctor recommended her to undergo a cochlear implant surgery as soon as possible before the nerves in her ear became damaged. The cochlear implant surgery cost RM104,000.

Her adoptive mother Soon Chong is unmarried. She makes and sells homemade cakes and kuih. She can only afford RM15,000, and her adopted daughter is still short of RM89,000 in medical expenses. They hope to receive help from the public so that Kah Kei can undergo a successful cochlear implantation before she started working.

【When she was three years old, she didn’t like to talk. After an examination, she was diagnosed with binaural hearing loss】

Kah Kei couldn’t speak well when she was three years old. Her adoptive mother sent her to a nursery hoping that she could learn to communicate through her peers. When she attended the kindergarten, her teachers reported that Kah Kei had hearing problems. Her adoptive mother brought her for a check at the Penang Hospital, and she was diagnosed with binaural hearing loss, and she needed a hearing aid.

Kah Kei started to learn how to speak when she was in Year One. As her language development was slow, it affected her learning, and her classmates often made fun of her inaccurate pronunciations.

Two years ago, the doctor informed that Kah Kei’s hearing has started to deteriorate, and the hearing aid was no longer effective for her as she could only receive half of the messages. The doctor recommended her to undergo cochlear implantation in her right ear to improve her hearing, but the surgery was quite costly. Due to financial constraint, the surgery has been delayed again and again.

In a recent follow-up visit, the doctor told her that the hearing aid was no longer working, and the doctor also confirmed that she was suitable to undergo cochlear implantation in her right ear, but the surgical fee was RM104,000 and the adoptive mother could only afford RM15,000. Hence, they approached One Hope Charity for help.

【As they did not undergo proper adoption procedures, Kah Kei’s birth certificate was confiscated when she applied for her MyKad at the age of 12】

When Soon Chong decided to adopt Kah Kei, she did not know about the adoption procedures. When Kah Kei was 12, she wanted to apply for MyKad, but her birth certificated was inexplicably confiscated by the relevant authority. As a result, Kah Kei became a stateless child.

The adoptive mother has been going from department to department to deal with Kah Kei’s citizenship since 2017. As all the documents, including the birth certificate, have been confiscated, she only document she has was a letter of application for Kah Kei’s citizenship. The adoptive mother hopes that Kah Kei can obtain her MyKad as soon as possible, so that she can lives a normal life.

As Kah Kei is not a citizen, she has to receive her education in an independent high school, and she could not enjoy the medical benefits as a citizen. Her medical expenses and education fees are a burden for the mother.

According to the doctor’s report, Kah Kei’s ear structure is suitable for cochlear implantation. If she plans to wait for her citizenship before undergoing the surgery, it may still have a long way to go. The doctor worried that the nerves in her ear may become damage by then, and a cochlear implantation will not help in improving her condition anymore.

Kah Kei is now preparing for her Unified Examination Certificate (UEC). She hopes that she can hear clearly after the cochlear implant surgery, which she believes will be helpful for her, may it be her continuing with her studies or working.

As for the issue of Kah Kei’s citizenship status, One Hope Charity has stepped in and assisted in contacting the relevant departments, and the departments are dealing with the application.

Her 53-year-old adoptive mother Wong Soon Chong, makes and sells homemade cakes and kuih. She earns about RM1,000 a month. The mother and daughter depend on each other, and she can only afford RM15,000 for the surgery and follow-up visits.

After reiveiwing the case, One Hope Charity decided to help Kah Kei in raising the shortfall of RM89,000 in her cochlear implant surgery fee. Her family agreed to fully authorise One Hope Charity to take charge of the fundraising and collect the donations from the well-wishers on their behalf.