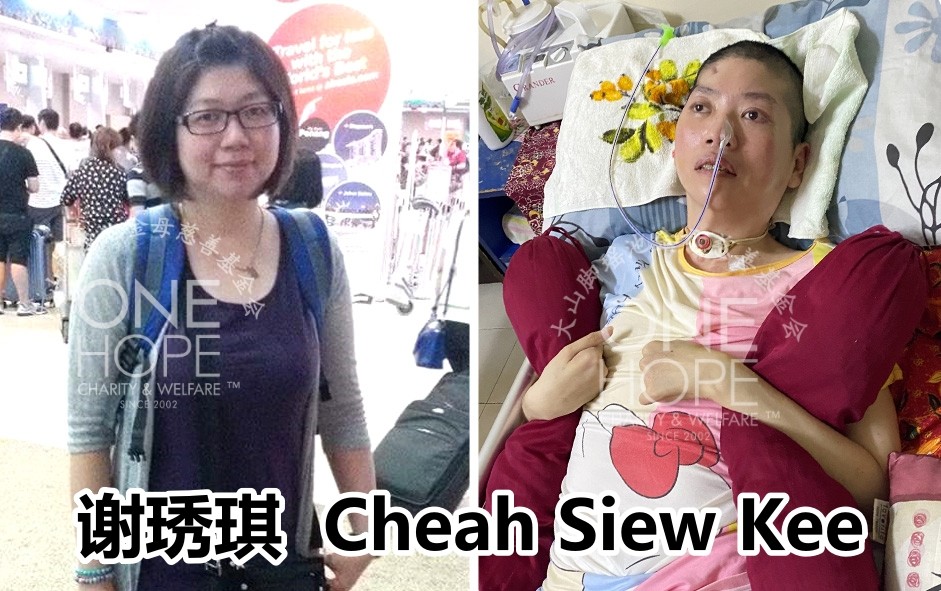 Women who have been paralyzed in bed for 5 years need at least RM4,000 per month for her nursing and physical therapy. Her husband's income has been affected by the Covid-19 epidemic. We hope that the generous public can help with her RM90,000 medical and nursing expenses.

Cheah Siew Kee suffered a sudden stroke when she was travelling in Taiwan in 2016. She underwent an emergency surgery in Taiwan to save her life and returned to Malaysia after that. Over the past five years, she has been under the care of her 42-year-old husband, Liam Kean Kok. However, the huge amount of medical expenses every month are a heavy burden for the husband. Furthermore, the pandemic has affected his job, which made him feels that his burden is even heavier now.

【Cheah Siew Kee has been bedridden for five years, unable to take care of herself. Her husband and elderly parents hope that she can be properly taken care of】

42-year-old Siew Kee suffered a sudden stroke when she was travelling in Taiwan with her parents in 2016. She was rushed to the Chung Shan Hospital and undergone treatments for two months there. After her condition became stable, she returned to Malaysia to continue her treatments. At that time, One Hope Charity helped her to raise RM500,000 to fund her medical expenses in Taiwan and Malaysia.

And now, Siew Kee is paralysed and bed ridden, and she needs to be taken care of by a caregiver. After he finished his work, Kean Kok needs to feed Siew Kee with milk every three hours, helps her to change the diapers and turn her body to avoid pressure ulcers. Although Siew Kee has been bedridden for a long time, but fortunately she does not suffer from bedsores.

Although Siew Kee receives a monthly aid of RM1,461 from the Social Security Organisation (SOCSO), as well as some formula milk subsidy, but the fixed expenses are still a heavy burden for the family.

42-year-old Kean Kok was a household goods salesman, who earned a basic salary of RM3,800 plus commissions which summed up to about RM6,000 a month. At the same time, he also received reimbursements from the insurance, so he was able to support the family. However, his company closed in 2019, and due to limited funds, he started his own business selling household goods, earning about RM4,000 to RM6,000 a month. As he also needs to support his parents and pay for their expenses, he has been struggling financially every month.

The outbreak of the pandemic caused his small business to collapse. His income has been greatly affected but he still working very hard to look for opportunities to earn more money. He started selling fruits, and he also worked before as an e-hailing driver. He has been relying on the financial help of his friends.

He approached One Hope Charity for help. After taking some time to review his case, as well as verifying various documents, One Hope Charity decided to assist Siew Kee in raising the medical expenses she need for three years. This can temporarily ease the financial burden of the family.

The family agreed to authorise One Hope Charity to take charge of the fundraising and collect donations from the well-wishers on their behalf. The fund will solely be used for Siew Kee’s nursing case and medical expenses, and will not be used for any other purposes.