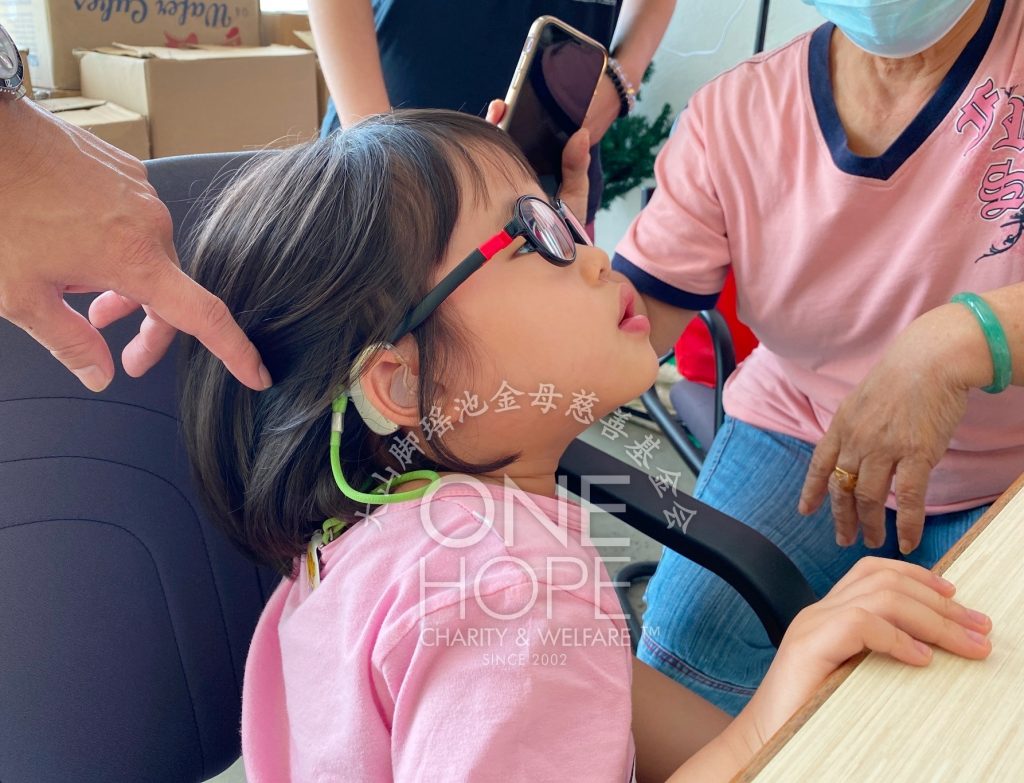 
5 years old girl, Cheoh Yee, suffered from frequent Epilepsy when she was a year old and causing her growth to be affected. Doctors had confirmed that something is abnormal with her brain wave and this is a genetical problem.

When she was 1 year old, she just learn how to roll over. When she was 2 years old, doctor diagnosed her with hearing problem and suggested hearing aid. After using hearing aid, her condition did not improve and doctor suggested her to go for artificial cochlear implant surgery. The surgery fee cost a fortune and her parents is unable to pay.

When she was 4 years old, she started to learn walking. Her parents were worried that she may not be able to walk.

Her mother cried and said that they will not give up any hope on her. "If we give up on her, who will take care of her? Please help our daughter."

Cheoh Yee who is from Seberang Perai Selatan was born in Feb 2016. Doctors suspected that she will have Mosaic Turner Syndrome when her mother was 6 months pregnant. They also found that her brain has water retention. Luckily, her condition did not deteriorate.

When she was 1 year old, she can only flip herself and do not know how to sit. Her parents brought her for checkup in 2017 and doctor asked them not to be worried.

After that, she frequently suffer from epilepsy in the middle of the night. After checkup, doctors said that it is caused by genetical issues.

Her epilepsy will caused her learning to be slowed and affecting her IQ.

In 2017, doctor realized that she is quiet and unable to produce voice. She was transferred to ENT and had been equipped with hearing aid. Her condition did not improve and doctor suggested her to undergo artificial cochlear surgery.

In 2018, she suffered from flu and causing epilepsy. She requires medication to control her condition. The side effect of the medication includes eye blindness, hot tempered and self injuring.

As she suffers from epilepsy, doctor suggested another high tech approach on her surgery but her parents could not afford the surgery cost.

Father Cheoh Kheng Haur, 35 years old, used to be a seafood restaurant owner.He closed down because of the pandamic covid 19. Now he is a farmer and his income is uncertain. His mother Ong Su Li (35 years old) is a salesperson in a plastic factory and earns about 5,000 ringgits a month.