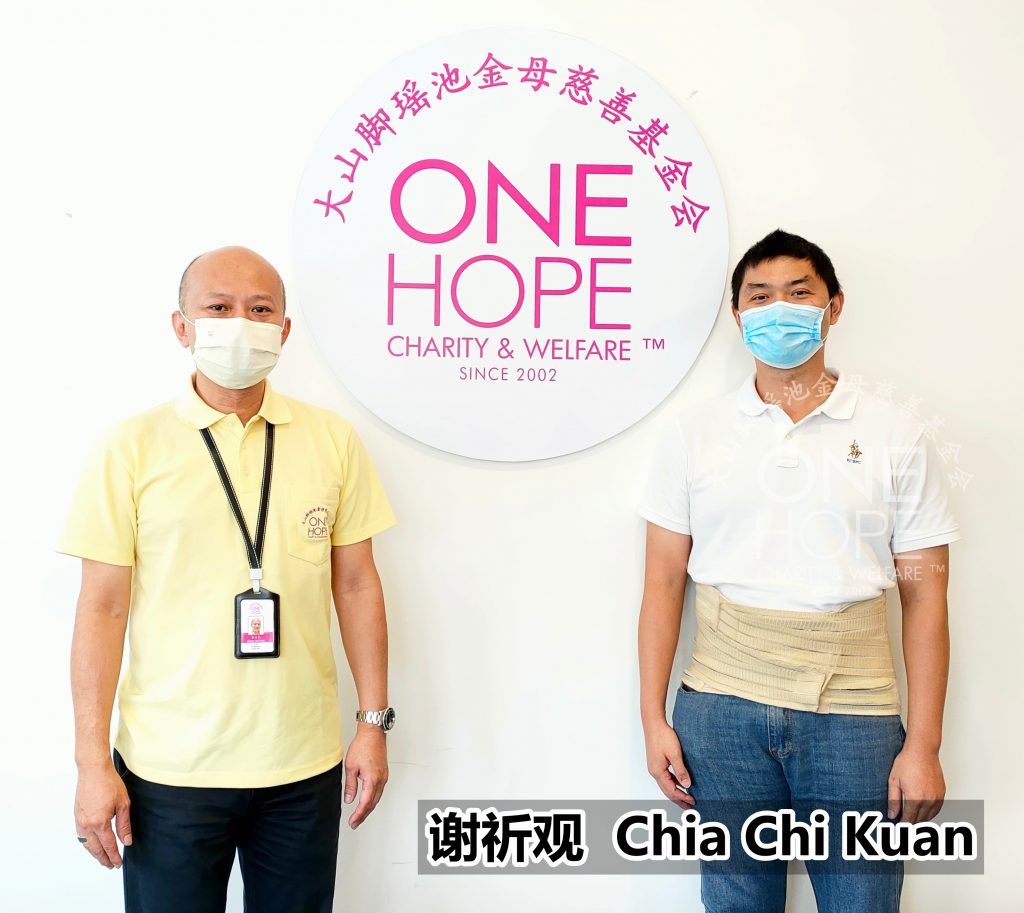 A 34-year-old Chinese man was diagnosed with lymphoma. Although he experienced relapsed lymphoma thrice in nine years, but he has very strong will power, where he continues his doctoral studies while undergoing chemotherapy. Now, he needs RM204,000 medical fund for treatment to fight against the cancer.

Chia Chi Kuan from Jitra, Kedah, is a student pursuing his PhD in the field of education at Universiti Malaya. He has the mission to reform the country’s education system. However, the young man who seems to have a bright future is fighting against cancer. He went through three chemotherapies and two times of bone marrow transplant, but he does not give up. He faces his illness positively and taking the opportunity to change his perceptions in life.

The self-supporting PhD student is facing his third recurrence of lymphoma and he needs 12 courses of immunotherapy at University Malaya Medical Centre.

【Decided to raise medical fund for him, with the hope that he could contribute to the nation’s education system after he recovers】

After reviewing the case, One Hope Charity decided to raise fund for his treatments for a year, which comprise of 12 courses of immunotherapy amounting to RM204,000, hoping that he could continue to pursue his dreams and continue in reforming the country’s education system.

Chi Kuan completed his bachelor’s degree in health science (Medical Radiology) at Universiti Sains Malaysia at the age of 23 and continued his studies for a master’s degree in medical physics at Universiti Malaya when he was 25. He was interested in doing research and teaching, and he became a tutor at the university then. During that time, he also prepared to continue to pursue a PhD.

After graduating from his master’s degree, he discovered a lump on his inner thigh in 2013, and he felt something was wrong. When he joined Universiti Malaya as a research assistant in 2014, he went for a checkup at University Malaya Medical Centre. He was diagnosed with non-Hodgkin lymphoma, and he started a series of chemotherapy, which was free of charge then.

In 2015, during a regular follow-up visit, another lump was discovered on his neck, and it was confirmed that his cancer relapsed. After went through two rounds of chemotherapies, he also underwent autologous bone marrow transplantation.

During his initial treatment, he did not let his family know about his health condition and faced the situation alone. However, as he faced some side effects from the treatment, he needed more mental support from his family, and his second chemotherapy needed tens of thousands of ringgits, he had no choice but to inform his family members of his illness.

His cancer relapsed again in 2018. As the paired anastomosis, he obtained bone marrow donation from his sister for transplantation.

【At first, he didn’t want his family to feel sad and chosen to hide his illness from them. After his family knew about his condition, they gave him full support and care, which allowed him to face his treatment strongly】

After he completed his two chemotherapies and two bone marrow transplantations, Chi Kuan’s long-depressed mood finally broke out. He fell into depression and twice wanted to commit suicide. Fortunately, he managed to seek help in time, and he was willing to take medication for depression. And now, he has successfully out of depression.

Chi Kuan said that after completing his treatment in 2015, he suffered from post-traumatic anxiety. Besides facing financial pressure, he was completely tied up by three jobs, which resulted him to feel depressed. He went to a psychologist after he found something was wrong, and he took his medicine regularly. He also quit two of the jobs, and gradually overcame the depression.

【Optimistic in facing his illness and fight against it positively】

Looking back on what had happened in the past, Chi Kuan deeply felt that he was a lucky man. He described cancer as a “teacher” that changed his perspective on life and helped him to find his direction and made a different choice for his future.

He admitted that he was interested in studying human brains in the past, and he hoped that he could carry out research on elderly degenerative diseases. However, cancer allowed him to see clearly and found the priority in his life.

“I took science majors for my bachelor’s and master’s degrees, and I wished to teach and do research at the same time. However, I decided to pursue education study for my PhD as I discovered some shortcomings in our education system. I would like to join the education system to educate our teachers, so that they could be more confidence in teaching our future generations,” he said.