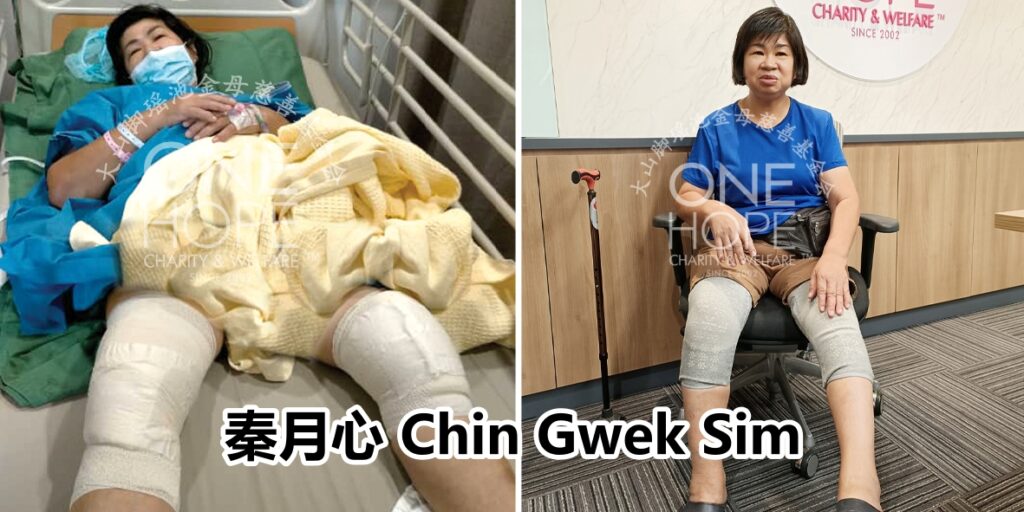 Chin Gwek Sim from Penang has suffered knee joint pain for ten years. She has tried acupuncture and joint-care supplements, but her condition has not improved. In August last year, the pain in her legs worsened, and she could not even walk, so she had no choice but to quit her job. When she went to the hospital for treatment, the hospital could only schedule her surgery two years later.

She often cried in pain and experienced intense pain, especially on rainy days, but the scheduled surgery date is still a long way to go. A specialist hospital recommended she undergo total knee replacement surgery to get rid of the pain as soon as possible. However, she could not afford the surgical fee of RM60,000, so she approached One Hope Charity for help.

【The single mother went through a lot of hardship to raise her only daughter on her own. She worked as a promoter in a supermarket for a long time, which damaged her knee joints. She also had arthritis and severe deformities of her legs】

Gwek Sim used to work in a factory when she was young. After divorcing her husband more than 20 years ago, she raised her daughter alone. She worked as a promoter in a supermarket for many years, and the long working hours and standing had damaged her knee joint. Her last job was as a canteen assistant in a factory, with a salary of RM1,200.

The intense pain in her knee joint made her unbearable. She often cried in pain. However, when she went for treatment in a government hospital, the doctor informed her that the earliest possible date to undergo surgery would be in 2024 due to many patients. The doctor only prescribed painkillers which will last until the surgery date. However, the surgery was too far away, and she did not dare to take too many painkillers for fear of hurting her stomach and kidneys.

In August last year, the knee pain was so severe that she couldn’t walk, which affected her work. She had no other choice but to quit her job. She went to a specialist hospital for examination, and the doctor diagnosed her with bilateral knee osteoarthritis with severe varus deformity. She needed a total knee replacement that cost RM60,000.

Gwek Sim and her ex-husband have a 32-year-old daughter, and the daughter was diagnosed with breast cancer recently and is still under treatment. And now, Gwek Sim is living with her parents, who are in their 80s, in her ancestral house. The family relies on the meager income of her younger brother to cover their living expenses. She hopes to undergo surgery as soon as possible to eliminate the pain and continue working to support her family.

After reviewing the case following a home visit, One Hope Charity decided to raise the medical expenses Gwek Sim needed. Her family agreed to fully authorise One Hope Charity to take charge of the fundraising and collect donations from the well-wishers on their behalf. Call One Hope Charity’s hotline at 016-419 2192, 019-232 2192 or 04-539 9212