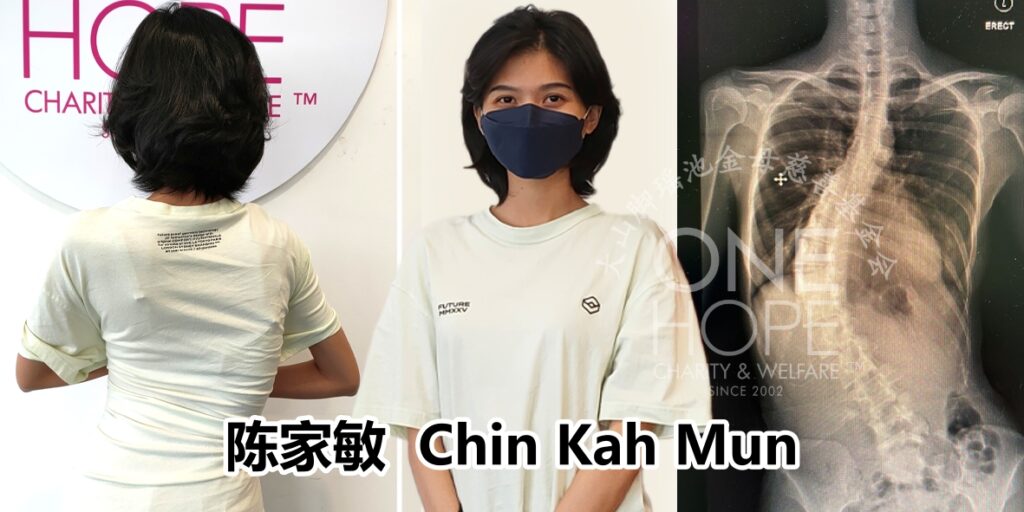 A 26-year-old Chinese woman has a 67-degree scoliosis. As a video editor, she cannot sit and work for a long time due to the health condition, and the spinal curvature will compress and contort her internal organs. She urgently needs RM48,000 for a corrective surgery.

26-year-old Chin Kah Mun from Kuala Lumpur was diagnosed with scoliosis of 40 degrees about 12 years ago. At that time, she underwent massage and physiotherapy. Not only did her condition not improve, the curve was found worsen to 67 degrees during a recent examination, and her internal organs were compressed and contorted.

【Massage, physiotherapy and chiropractic can only relieve the pain but the spine keeps bending in a side】

When Kah Mun was 14 years old, her elder sister discovered that her back was not balance when she was riding a bicycle. Her parents took her to the hospital for a check and it was confirmed that her scoliosis was 40 degrees at that time. As scoliosis surgery was not common, and the family was having financial problems at that time, she did not manage to undergo surgery back then.

After that, her parents took her for various massage, physiotherapy and chiropractic. Although the pain was relieved but the scoliosis of the spine did not improve.

Due to Covid-19 lockdown, she stopped the physiotherapy for two years. At the end of last year, she felt back pain. She had to sit down and rest after standing for less than an hour, but she could not sit for a long time as well, which seriously affected her work.

In the middle of this year, she went to the hospital for a check. It was revealed that her scoliosis was 67 degrees, and the doctor advised her to undergo surgery as soon as possible, otherwise the risk would increase, and if the spinal curvature worsens, compression and contortion of her internal organs will happen and put her life in danger.

Kah Mun is a video editor earning RM3,500 a month. Her 61-year-old father is a semi-retired real estate agent, and her 55-year-old mother is a housewife. She has a 27-year-old elder sister who shares the household expenses. She also has two sisters aged 22 and 16, who are still studying. She is unable to afford the surgical fee, so she approached One Hope Charity for help.

After reviewing the case following a home visit, One Hope Charity decided to assist Kah Mun in raising the RM48,000 for her corrective surgery. Her family agreed to fully authorise One Hope Charity to take charge of the fundraising and collect donations from the well-wishers on their behalf.