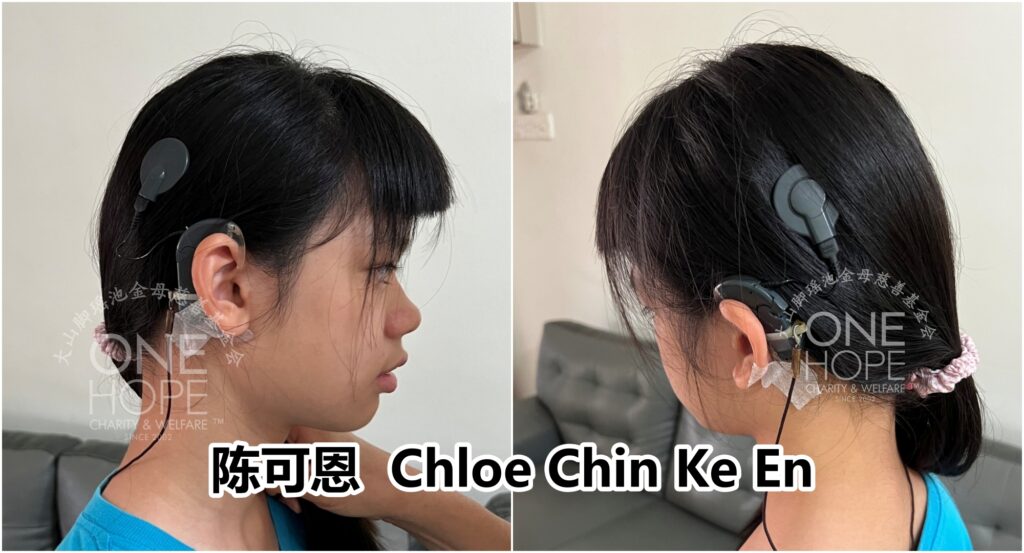 She is a girl who loves to draw. She expresses her world through her paintings, which are full of colours. However, she is a girl with bilateral hearing loss. With help from the public, she had a cochlear implant surgery when she was three.

Eleven-year-old Chloe Chin Ke En from Perak had a successful cochlear implant surgery when she was almost four. She entered a beautiful world with sounds and showed her talents in painting. Unfortunately, the cochlear processor became obsolete and discontinued, so she urgently needs RM65,000 for part replacement. The substantial amount caught her single mother off guard. Hence she approached the public for help.

【The doctor informed the mother that Chloe had a minor stroke in her right brain during the fetal period. Therefore, half of her body and limbs were inflexible, which also affected her hearing】

Despite being from a single-parent family, Chloe has been surrounded by love and care from her 37-year-old mother Yap Wei Dhing. Although she frequently needed treatment at a hospital since she was young, she is very lively and cheerful and is not afraid of strangers.

“With the cochlear implant, she can have better interaction with people around her,”

“Only when she is taking a shower she needs to take off the cochlear implant to avoid it from getting wet. At that time, Chloe will become very silent and stay alone quietly,” Wei Dhing said sadly.

She said she discovered that the fetus was beating abnormally during her pregnancy. However, when she went to a private clinic for a check, the doctor informed her that the baby was calmer and quiet, so she did not take it seriously. The baby was also born with no problem detected.

She added that when Chloe was three months old, the grandmother found that Chloe would not respond whenever she called her. So, they brought her to Ipoh Hospital for examination. The result revealed that Chloe had a minor stroke in her right brain during the fetal period, affecting the flexibility of half of her limbs and hearing ability in her ears.

“The doctor suggested Chloe wear a hearing aid and scheduled for cochlear implant surgery. However, the doctor proved that hearing aid was ineffective when she was three. The doctor also informed us that the hospital’s quotas for cochlear implant surgery prioritised those who were learning and had a higher chance of recovery; hence, the doctor referred Chloe to the University Malaya Medical Centre for follow-up treatment.”

After that, Chloe underwent cochlear implant surgery in both ears, funded through public donations. As it took a while to turn on the machine, she only started to hear the sounds around her when she was almost four. Her learning progress has been left behind compared to the other children her age. Her standard is now similar to children of eight years old, and her pronunciation is not accurate. However, she can use simple words and vocabulary and studies in a special-education class.

The disadvantage of the cochlea used by Chloe currently is that the battery needs frequent replacement, and the battery costs RM250 a month. And now, the parts have been obsoleted, so she needs a processor replacement for her cochlear implant.

Chloe grows up in a single-parent family. Her mother Wei Dhing is a part-time beautician with a salary of about RM1,500. She also gets some commission. After she divorced her husband, their children – a 15-year-old son and 11-year-old Chloe live with her. The mother dan children are struggling financially and cannot afford the processor replacement fee, so they hope to get some help from One Hope Charity.

After reviewing the case following a home visit, One Hope Charity decided to assist in raising the medical fees she needed. Her family agreed to fully authorise One Hope Charity to take charge of the fundraising and collect donations from the well-wishers on their behalf.