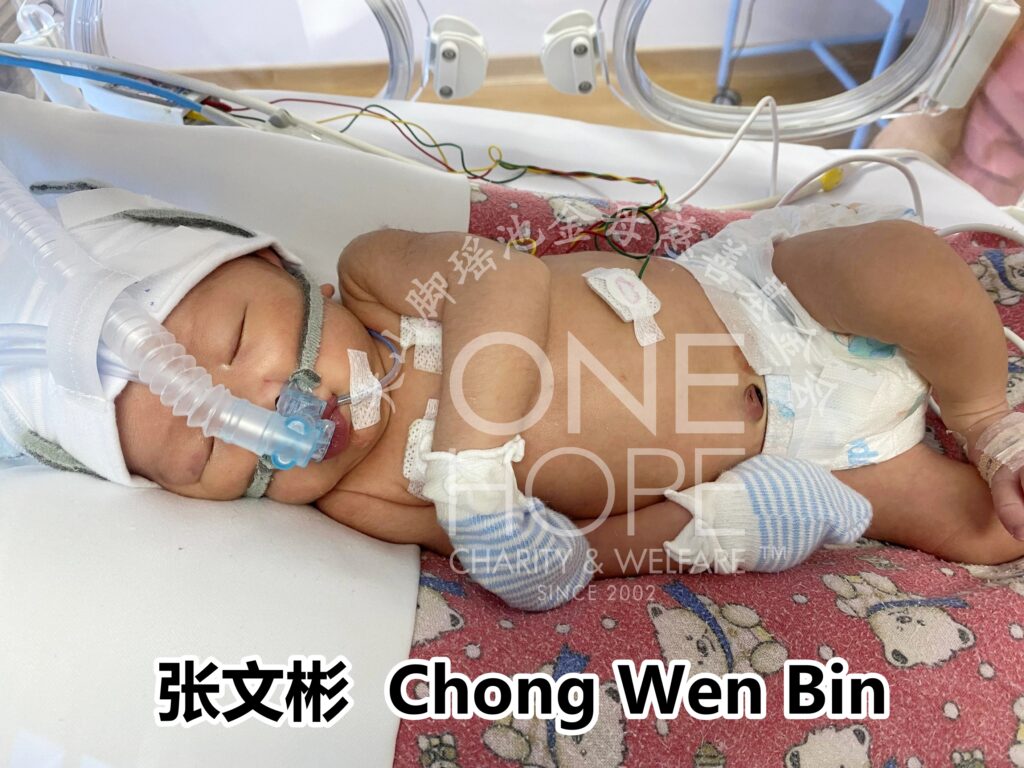 A Chinese national woman who married to Malaysia and was waiting excitedly to her first child with her husband. However, the child was born prematurely two weeks before the expected due date and was diagnosed with pulmonary edema (fluid in lungs). He needs to undergo antibiotic treatment for three weeks in a special incubator. The first-time parents plead the public to donate RM80,000 to save their baby.

Chong Wen Bin, a premature baby from Ipoh, Perak was originally birth date on November 7, but he was unexpectedly born in advance on October 15. His parents Chong Wei Cheng (35 years old) and Yang Qing Fei(36 years old) were happy to welcome their newborn baby. Unexpectedly, the child's respiratory distress was extremely abnormal after birth. He was diagnosed that the lungs were hydrous and the blood oxygen content was very low. He needs to rely on an oxygen breathing machine. In an emergency, sending him to the neonatal ICU to receive antibiotic treatment is the only way to keep him safe.

He was now only about two weeks old, receiving intensive treatment in the neonatal ICU, his small body was full of breathing aids. According to his mother, her baby has been staying in ICU since he was born. She even doesn't have a chance to hug her son at once. She hopes that kind-hearted people can help her son recover and grow up healthily.

The baby’s father Chong Wei Cheng and his mother Yang Qing Fei met in China a few years ago, and they fell in love. Qing Fei later moved to Malaysia and lives in Ipoh – Wei Cheng’s hometown. In February this year, Qing Fei became pregnant and the couple was very happy as this is their first born. The two families were looking forward to welcoming the baby.

The baby’s father Wei Cheng said that about two weeks before the expected delivery date, his wife’s experienced rupture of membranes and he rushed his wife to the nearest specialist hospital. As his wife was categorised as advanced maternal age, after consultation with a doctor, the doctor decided to perform a caesarean section.

“I have already paid the caesarean section and medical expenses of my wife, amounted to RM7,500,” he said, adding that he is unable to afford the medical fee of his son. Hence, he approached One Hope Charity for assistance, hoping that the public can provide the family with the help they need.

His 35-year-old father Wei Cheng currently helps his friend in online business, earning RM60 a day. His works include stock taking, goods wrapping and others. His 36-year-old mother Qing Fei is a Chinese national, hence, she does not have a job.

After reviewing the case, One Hope Charity decided to help the baby. His family also agreed to authorise One Hope Charity to take charge of the fundraising and collect donations from the well-wishers on their behalf.