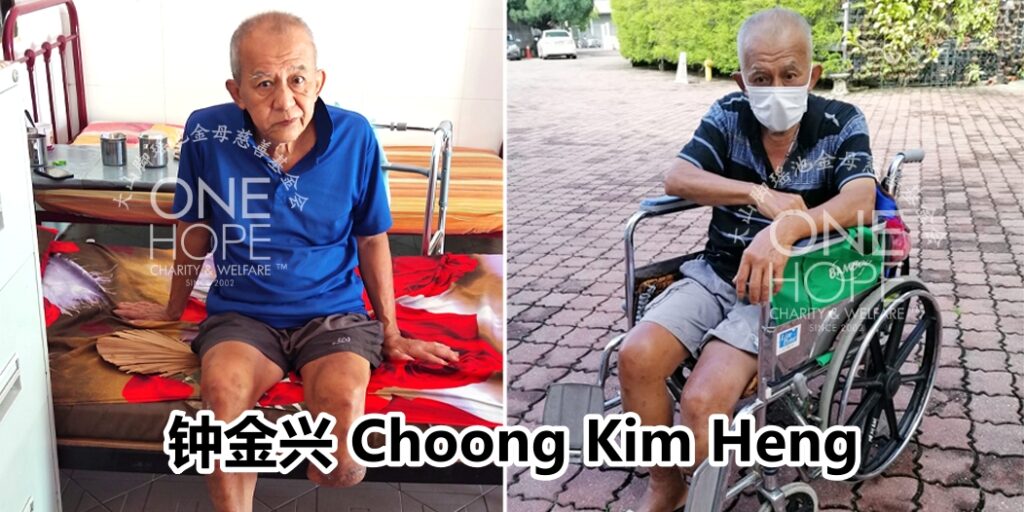 The disabled elderly relies on a wheelchair to find his siblings, but the younger brother and sister are also old and no ability to care for the said elderly. The Choong Kim Heng, 65-year-old, has been slept on the street for more than a month, pleading for a place to stay and ability to take care himself!

Choong Kim Heng suffered from severe diabetes and was amputated. He was homeless and wandered around for more than a month. He was in the Gohkaki street during daytime. At night, he was slept and begging around Bukit Mertajam Pek Kong Cheng. For urinating and showering depends on the shop owners and then meals rely on passers-by give some money to get three meals a day. He also facing the risk of being robbed.

Choong Kim Heng was amputated his left calf in October 2021. Now, there is a small wound with pus at the stitch, and his left foot is also swollen. Choong Kim Heng sat in his wheelchair lonely and uncertain of his future.

【The younger brother & sister are also old and unable to take care of their brother. The younger sister was begging for help from ONE HOPE CHARITY so that the elder brother can have a safe place to live in】

Choong Kim Heng, who worked as a bus and a lorry driver when he was young. He was moved to Johor and work in a coffee shop more than a decade ago. He was also divorce due to the breakdown of his relationship with his wife, and his only child also followed the mother. After that, they had no any communication and contact.

During the young time, he used to work in Perak and Johor. In October 2021, his left calf was amputated due to diabetes. After that, he was admitted to a nursing home in Johor. However, his savings were finished and he was forced to wandered on the streets. On 5 March, he alone with a wheelchair heading north to Bukit Mertajam to seek the assistance of his brothers and sisters. Unexpectedly, everything he knows already gone, his hometown has also developed into a new place, and he has no choice but to fall into the streets.

At that time, he knew that his brothers and sisters were helpless, the environment did not allow them to take him in. He also do not want to become a burden to them, so he could only be forced to wandered around on the street.

After arriving at the place where he was wandering, ONE HOPE CHARITY team checked his family situation and decided to arrange him to a nursing home. We also assisted in raising the cost of his 4-year nursing home, prosthetic limbs and wounds dressing fee.