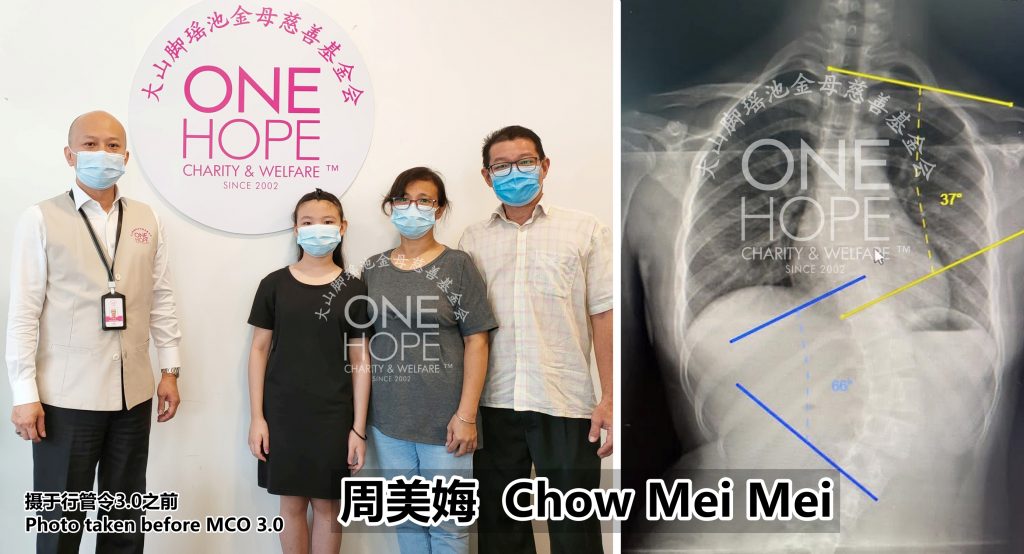 It was supposed to be an ordinary hug from a brother to his sister, but it turned out to be something shocking – the sister has a pronounced curve in her spine.

The brother, who returned from Singapore in the mid of April after leaving his hometown for a long period of time noticed something unusual when he hugged his sister.

She was later diagnosed with scoliosis with a 66-degree curve in her spine and a surgery is needed as soon as possible. If the spinal curvature worsens, compression and contortion of her internal organs might happen, which would put her life in danger.

Chow Mei Mei, 13, from Sungai Buloh in Selangor was shocked to learn about her health condition. Since two weeks ago, she has been suffering from back pain and she’s unable to stand or sit for too long. She needs a cushion and leaning her body to one side throughout her online classes to ease her constant discomforts. She also has to lie frequently to relieve her backache.

Her mother is heartbroken for her daughter’s plight. She feels bad for neglecting the health condition of Mei Mei. The mother has a simple wish – that Mei Mei could stop suffering from pain and grow up healthily.

Doctor told her that Mei Mei needs a surgery at the earliest possible time because the risk increases as the curve progresses. However, the surgical fee, amounting to RM38,000, is not something the family could afford, hence they approached One Hope Charity for help.

Mei Mei is not from a well-to-do family. Her 54-year-old father, Chow Chee Keong, works as a welding worker, earning about RM2,500 a month. Her mother, Wong Choi Yoke, 52, works as a part-time cleaner at a kindergarten. She has an elder sister, three elder brothers, and a younger sister.

Her grandmother, who is in her 80s, was diagnosed with lymphoma in 2019 and her cancer has spread to her lungs. Chee Keong and his brother went all out to borrow money for their mother’s cancer treatment. It has put the family in debt and Chee Keong could no longer afford the surgical fee of his own daughter.

The family does not have savings and insurance coverage, and the ongoing Covid-19 pandemic has badly affected the income of Mei Mei’s parents and siblings. They simply do not have extra money to pay for Mei Mei’s medical expenses.

After reviewing the case, One Hope Charity has decided to assist Mei Mei in raising the RM38,000 surgical fee.