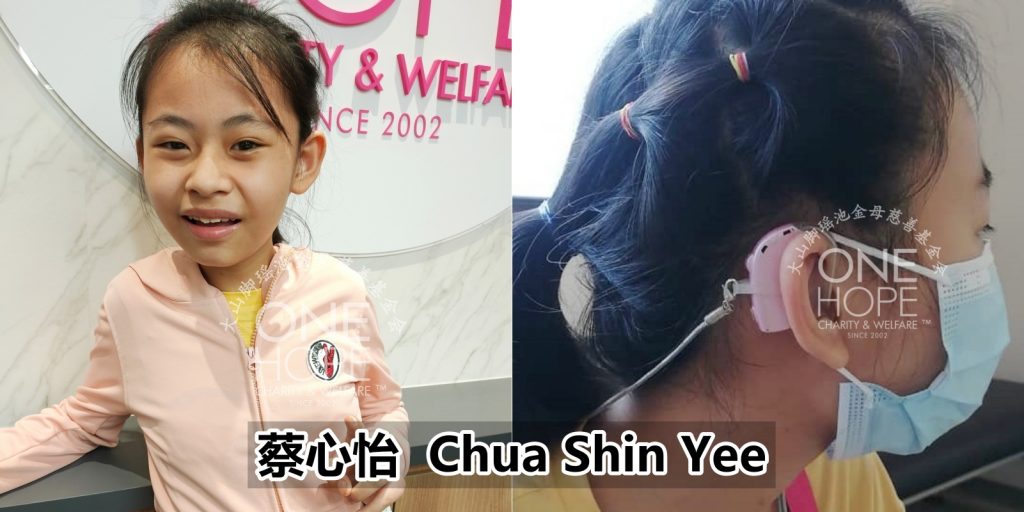 A young girl was born with hearing impairment and over the years she had been using sign language to express. The parents, however, hoped that their daughter would be able to hear so that she could protect herself from danger. While the doctor already identified a suitable right cochlear implant, the parents hoped that the public can help with the medical expenses of RM82,000.

Chua Shin Yee is a 12-year-old girl from Kedah. Since childhood, she was diagnosed with hearing impairment, but she missed out on the right opportunity to undergo surgery as she already went to a dead-mute school learning sign language. The only thing that concerns her parents was that their daughter could at least hear sounds of danger like a car horn or falling objects so that she can protect herself.

Not only that, but she also hoped that her daughter could at least learn to call “mom” and “dad”. However, these sounds come with a hefty price and needed a long period of time for language therapy sessions. What matters now is to be able to let her daughter hear.

【Parents fell into their guilt for missing out on the golden opportunity. All they wanted is for her to hear the sounds of warning to protect herself】

Chua Shin Yee’s hearing loss was noticed when she was one, when the noises of firecrackers did not faze her. That’s when her parents brought her for a medical checkup and was later confirmed her hearing impairment. She was equipped with a hearing aid when she was two but there was no improvement in her hearing ability.

Year after year, the parents have waited for the hospital to arrange their daughter’s next treatment, as well as the parents’ lack of knowledge on the matter and further delays worries them. It was until last year when the father found out about One Hope Charity had held a fundraiser for a child’s artificial cochlear implant surgery, they finally found hope for her daughter to escape the muted world.

At the time, Chua’s father brought her to a specialist hospital for examination, but the huge expense was beyond the parents’ ability to settle, which also had caused further delays on her treatment.

The parents were remorseful that they had missed out their daughter’s surgery, as well as her needed speech learning ability. Yet, they chose not to give in. After a couple of clinical tests, a hospital has identified a suitable right ear artificial cochlea for implant. It is only that after surgery, she would need to spend a lot more time in speech therapy. But to the father, all that matters is that she could at least hear the warnings and be able to stay cautious.

The father, Chua See Han, 40, worked as a plumbing technician with a monthly income of RM2,000 but his work was put to a grinding halt due to MCO, and had even lost his job insurance. The mother, Shuk San, 35, is a housewife. Both of them have also taken care of their 6-year-old son.