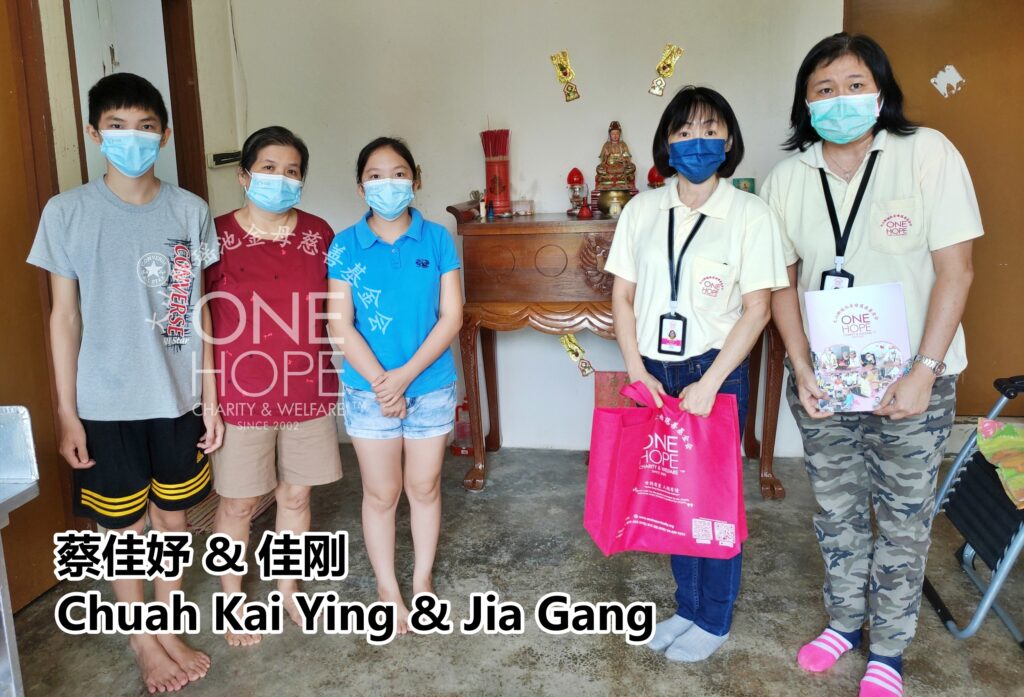 The siblings had hard-of-hearing since they were young but the artificial cochlear implant had enabled them to attend schools, and the eldest sister even secured a place in a university. However, their cochlear sound processors have failed and need to be replaced. Their single mother could not afford the fees amounting to RM36,000 the siblings needed; she’s hoping that the public could help her two children to regain their hearing ability.

The 21-year-old sister Chuah Kai Ying and her 14-year-old brother Chuah Jia Gang underwent their artificial cochlear implant surgery at the age of 8 and 2 respectively. After the surgery, the siblings started schooling. And now, the sister is a first year bachelor degree student pursuing architecture and planning at Universiti Sains Malaysia, while the brother has just entered Form One.

One month ago, the sound processor of their artificial cochlear which they have been wearing for many years failed. The siblings were forced to use hearing aid on one side of their ear to continue with their online classes. They are from a poor single parent family, and their mother could not afford the sound processor replacements for her two children.

【Eldest daughter and youngest son suffer from hearing lost, while the second son had congenital heart disease. The single mother made a tough decision to delay the artificial cochlear implantation for her eldest daughter】

The siblings are from Paya Terubong, Penang. When Kai Ying was 4 years old, her kindergarten teachers realised that she had delayed response every time when they called her. Her family took her to the hospital for examinations, where she was diagnosed with hard-of-hearing in both ears and had to wear a hearing aid.

During that time, she was supposed to undergo artificial cochlear implantation surgery, but her newly born brother was diagnosed with congenital heart disease and urgently needed surgery to save his life. The second son underwent two heart surgeries at the National Heart Institute then. As the family was busy with the treatment of the second child then, they had neglected Kai Ying’s hearing impairment.

Until when she was 8, Kai Ying had an artificial cochlear implanted in her left ear, and a hearing aid in her right ear.

Due to the past experience, when her youngest brother was confirmed to have hard-of-hearing in both ears after a hearing test, Jia Gang undergone his artificial cochlear implantation in his left ear, and a hearing aid in his right ear when he was 2 years old.

The sister Kai Ying is currently pursuing her bachelor degree in architecture and planning at Universiti of Malaysia. She relies on National Higher Education Fund Corporation (PTPTN) loan to pay for her tuition fee and living expenses. Her brother Jia Gang is in Form One, and he needs to attend online classes. As he could only hear with the side of his ear with the hearing aid, he has to tune up the volume to hear.

Their father has left home since many years ago, and their 50-year-old mother Tan Phaik Meay is the sole breadwinner of the family. She hopes that her children could be independent. In 2018, she was diagnosed with breast cancer stage III. She had already received her treatments but she still needs continuous tracking and examinations.

As she is a cancer patient, she received a monthly allowance of RM1,722 from Socso. A huge sum of her salary went to the treatments and college education of her second son. She did not have extra money and savings for her two children’s sound processor replacement, hence she approached One Hope Charity to seek help.

After reviewing the case, One Hope Charity decided to raise the fund needed by the siblings. Their family agreed to authorise One Hope Charity to take charge of the fundraising and collect donations from the public on their behalf.