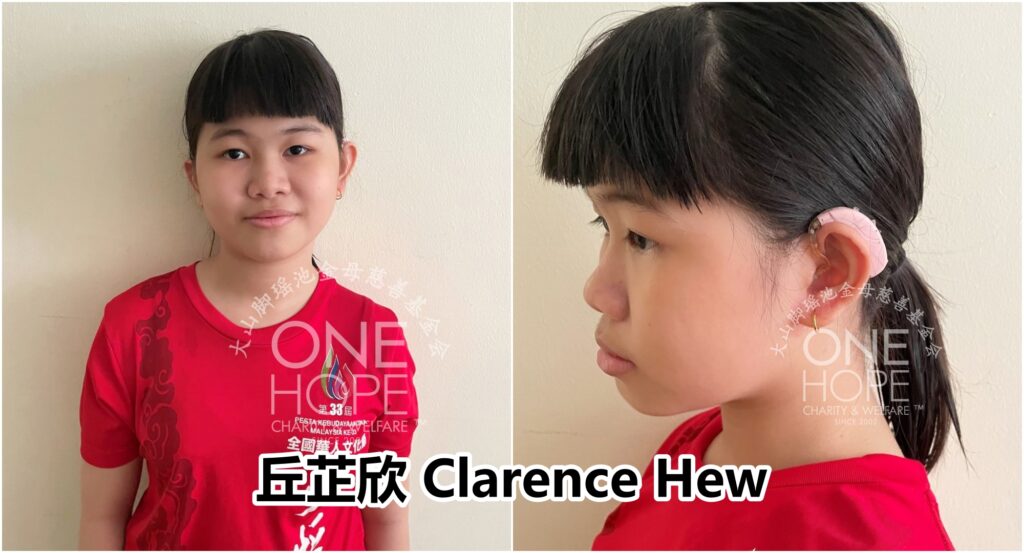 Clarence Hew is a smart and lovely girl. However, she was born with congenital hearing loss and she started wearing a hearing aid when she was small, and she underwent a cochlear implant surgery in her right ear when she was three. She also underwent speech therapy and other therapies, which helped her to improve in her learnings. She managed to start schooling and spent her past eight years study happily.

The good moments don’t last long. The now 11-year-old girl went for a hearing test last year and found out that the hearing ability in her left ear deteriorated. Since she is about to enter secondary school, her parents hope that she can undergo a cochlear implant surgery in her left ear as soon as possible, so that Clarence can hear better and avoid obstacles in her learning process and communication with the others. The cochlear implant surgery cost RM71,200, but the parents can only afford RM20,000. They hope that the public can help them with the remaining RM51,200.

【Her mother quits her job so that she can accompany her daughter around the clock, as well as to provide her with one-on-one teaching on pronunciations and speaking, hoping that the girl can live a normal life】

Clarence from Serdang, Selangor, was not sensitive to sound since she was small. Her mother brought her to seek medical treatment. At that time, the doctor informed that the child had too much ear wax, and the doctor only prescribed her with some ear drops, but the mother was still worried. The mother saw a child wearing a hearing aid by chance, and she later found out that a hearing test could be performed for a child, so she quickly took her daughter to a hospital for the test.

After the diagnosis, it was discovered that Clarence was born with congenital hearing loss. The sudden bad news made her parents feel helpless, and they also followed the doctor’s instructions to let their child wore a hearing aid.

Unexpectedly, the doctor informed that Clarence completely lost her hearing in her right ear after eight months, and suggested her to undergo a cochlear implant surgery. For the sake of their child’s future, the mother agreed to the surgery and she also borrowed some money to pay for the surgery. The surgery was done at her age of three, and it went well. Her mother also quit her job and became a full-time housewife since then. She taught her daughter on pronunciation and speech, and now, she can speak like any other children, and her learning has progressed well.

Eight years later, at the age of 10, the doctor conducted a hearing test on Clarence’s left ear. The report showed that her hearing ability deteriorated. If the cochlear implanted in the right ear was turned off and she only wore a hearing aid in her left ear, she would not be able to hear at all. Her mother was worried as the daughter has only half of her hearing. The doctor also suggested her to undergo cochlear implant surgery in her left ear.

“She can now hear the sounds around her. I don’t want to deprive her chance to hear using the other ear, but the surgical fee is too high. I hope that everyone can help so that my daughter can have complete hearing.”

Her 41-year-old father Hew Wai Seng has been working as a kitchen assistant abroad for a long time. He has been in China for two years and has not been able to return home. He earns about RM5,000 a month. Her 41-year-old mother Wong Huey Shan is a housewife. The couple have two other children aged 20 and 17, and they are still schooling. Clarence is the youngest child. Currently, the father is the sole breadwinner of the family, and he needs to pay for the housing loan, living expenses and others. So they can only afford RM20,000 and they hope that the public can help them with the shortfall of RM51,200.

After reviewing the case following a home visit, One Hope Charity decided to help Clarence in raising the medical expenses. Her family agreed to fully authorise One Hope Charity to take charge of the fundraising and collect the donations from the public on their behalf.