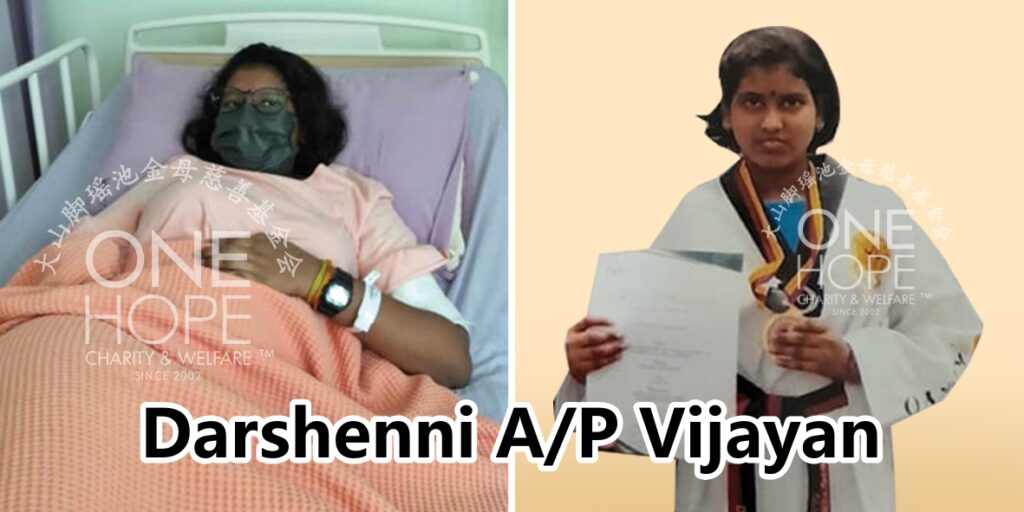 13-year-old Darshenni A/P Vijayan was a cheerful and active girl. She started learning Taekwondo when she was six, and after much hard work and trainings, she was awarded a black belt when she was 10. She often took part in competitions and had won countless awards.

However, she has to stop all the sports after being diagnosed with acute promyelocytic leukaemia. She also has to withstand various side effects of the chemotherapy, such as hair loss and nausea. She has a lot of wounds left on skin after numerous injections. Darshenni has to undergo 10 months of chemotherapy and the recovery rate is about 86% to 97%, but the weekly chemotherapy cost is as high as RM10,500.

In order to allow their daughter to receive treatments, the parents borrowed money from their friends and relatives. However, there is still a shortfall of RM168,000. The parents appeal to the public to help their daughter.

【The daughter suffers from hair loss due to chemotherapy. To show their support, her mother cut her hair short, while her father went bald to fulfil his vows during Thaipusam】

Darshenni from Shah Alam in Selangor started to feel tired easily and lost her appetite since mid of last year. In February this year, she had persistent fever and sudden nosebleeds, but her condition did not improve after seeking medical treatment. She later went through a blood test which revealed that her white blood cells and platelets counts were low. She was mistakenly treated as a dengue patient and was referred to Shah Alam Hospital. However, she was tested negative for dengue fever.

During the process, the doctor discovered that there was some problems with her blood. After repeated blood tests and bone marrow tests, Darshenni was diagnosed with a rare type of blood cancer – the acute promyelocytic leukaemia in July this year. As her family is not well-to-do, they requested to transfer her to the University of Malaya Medical Centre for treatment.

Acute promyelocytic leukaemia (APL) is a rare sub-type of acute myeloid leukaemia (AML), which develops mostly in adults. University of Malaya Medical Centre admitted that this is the first case of a child suffering from APL in that hospital. The doctor suggested her to undergo 10 months of chemotherapy, but the treatment fee will sum up to RM231,000. The family members managed to raise and paid RM63,000 to cover the cost of chemotherapy for six weeks, but they are unable to afford the RM168,000 needed for her subsequent sessions.

Her 49-year-old father Vijayan A/L Selvaindiran works as a driver and runner for a bank, earning RM2,883 a month. Her 46-year-old mother Manggai A/P Kesevan is a housewife. The couple has two other sons aged 21 and 11. All their children are still schooling.

After reviewing the case, One Hope Charity decided to help Darshenni. Her family agreed to authorise One Hope Charity to take charge of the fundraising, and collect donations from the well-wishers on their behalf.