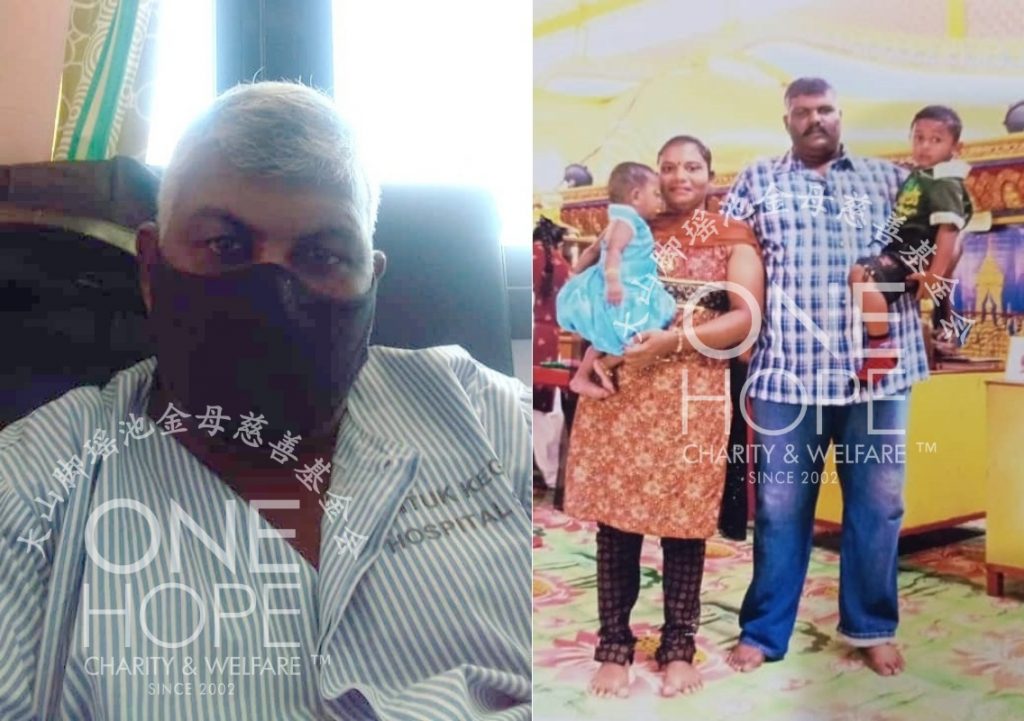 With three of his main blood vessels blockaded, the breadwinner of a family could have a heart attack at any time. He urgently needs to undergo surgery, but needed RM25,000 for the fee.

“I can’t fall. I still have to take care of my wife and kids. I promise to be more aware of what I eat and adjust my body.”

Dilip Kumar A/L Goballey Caresnal, 43, is from Sungai Petani, Kedah, has been looking for doctors due to a feeling of bloating. He had borrowed money from his friends in order to go for a medical checkup, which later found that three of his main blood vessels in his heart are 100%, 90% and 50% obstructed respectively.

The hospital initially arranged his next checkup in August before arranging the surgery, but the patient has been feeling chest pain and in need to control his condition with medication. Knowing that the patient has a wife and kids to take care of, he knew he must not fall. Sadly he was forced to take unpaid leave, hence he approached One Hope Charity for help, in hopes that he could undergo surgery and continue working to feed the family.

To date, Dilip Kumar took a lot of energy just from taking a shower, and needed to have a 15 minute rest before making his next action. He also could not stand or walk for too long. Let us please lend a hand to help him continue to fight for his life.

【Medications has been used to control his frequent chest pains, but only surgery can help remove the root of his illness】

Dilip Kumar has a burly body since young and also suffered from high blood pressure and diabetes, but they were all controlled well with medication. But in January this year, he felt a sudden bloating in his stomach, and not even medication could help control his condition. His chain pains have also made walking a laborious activity. When he realised that three of his main blood vessels were obstructed, he knew that he was in danger.

To date, not only he suffered from chest pain, but also breathing difficulties. Once he feels the pain, he relies on the heart sublingual tablet to control it, but only temporarily. Lately, he felt that he would have a heart attack at any time, so he hoped that the One Hope Charity could help him to get his surgery as soon as possible.

Dilip Kumar works as a container surveyor at Port Klang with a monthly income of RM2,500. He lives in a worker’s dormitory in Klang and returns to Kedah twice every month. Ever since he was diagnosed with obstructed blood vessels, he was unable to work. He already used up all his sick leaves and was forced to take unpaid leave since March.

Since March, he has been relying on his savings to deal with the daily expenses, but all the medical checkup fees were settled with the money lended by his friends.

His wife Letchumi A/P Vedhanayagan, 39, is a housewife, taking care of two kids aged 14 and 12. The living expenses for the family of four as well as the education fees for the kids were all depending on the breadwinner, so the patient knows that he should not underestimate his current health condition.

After reviewing the case, the Association has agreed to launch a fundraiser to raise RM25,000 for his surgery.