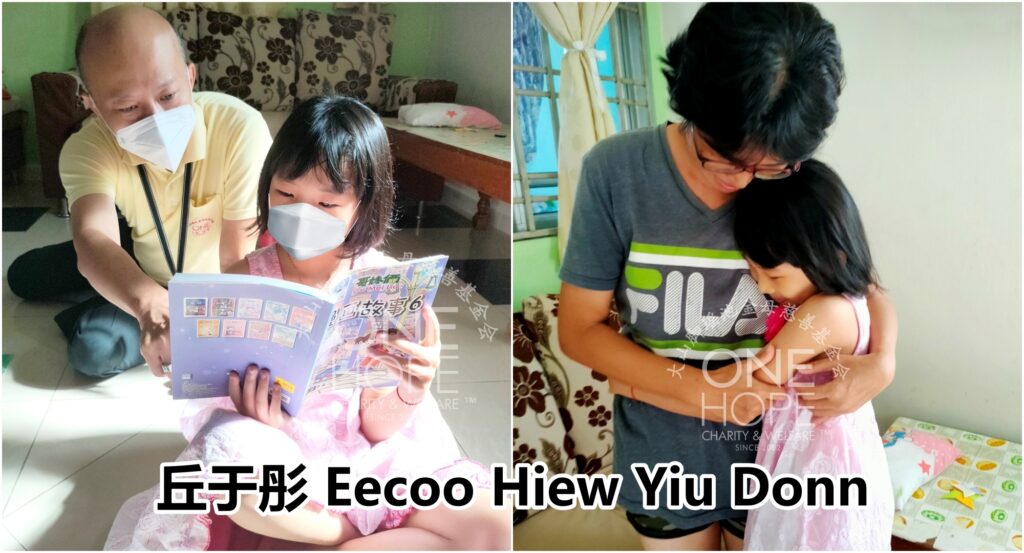 Nine-year-old Eecoo Hiew Yiu Donn is a lively, cute and articulate little girl. The simple and innocent girl comes from a single-parent family. Her father has passed away and her mother suffers from epilepsy. The mother also can’t get over the grief of losing her husband. The girl’s 64-year-old grandmother is worried about the future and the life of the family of three.

Eecoo, a Year Two pupil from Kulim, Kedah, knows that she comes from a single-parent family, and her family is poor. She likes to read. The thoughtful girl knows that she needs to study hard. Although she also shares common interests with other little girls, such as playing dolls, Lego, building blocks, and she wanted to learn piano, but she hides all the interests due to her family’s condition. Despite this, she is still an optimistic and positive child.

Her grandmother is weak and suffers from various illness. Not only is the family facing shortage of food, but the grandmother is also worried about the future of her epilepsy daughter and the granddaughter, especially after her death. After a home visit and reviewing of the case, One Hope Charity decided to raise RM100,000 to support the living expenses of the family and the education expenses of the little girl for five years, so that the family can temporarily overcome the life challenges.

【Her father died after involving in an accident, and her mother, who suffers from epilepsy, has been in grief and often broke out in tears. The mother is distraught after losing her job at the end of last year】

Eecoo’s father Hiew Yong Sang was involved in a road accident in September 2018. At that time, he went to the hospital for a check and went back to work as usual the following day, but three months later, he often had abdominal pain but check-ups revealed that he was alright. Unexpectedly, he had stomach pain on 1 January 2019 and was rushed to the hospital, and he died suddenly on the next day.

Eecoo’s grandmother tried to check the root cause of Yong Sang’s death, but to no avail. The grandmother later learnt that Eecoo’s father had actually taken an X-ray after the accident and it showed that he had three broken ribs, but he ignored the pain so that he could continue working. The death report showed that he died of acute coronary syndrome (rupture of blood vessels). Eecoo’s father worked as a lorry driver at a recycling centre before his death. He was responsible for collecting recycling items from the households. He earned about RM2,000 a month. He died at the age of 51.

As for Eecoo’s 43-year-old mother Lim Yen Mei, she has been suffering from epilepsy since she was in secondary school. She would suddenly fall to the ground, and often broke her spectacles, injured her chin, and even underwent stitches when she experienced epileptic seizures. She needs to go for regular follow-ups at the hospital and use medicine to control her condition.

She has been working in the recycling centre for 10 years, earning RM1,200 a month. However, her salary was halved due to the negative impact of pandemic since June last year, so her monthly salary reduced to RM600. She was retrenched in December last year and the family of three suddenly lost their source of income. Her medical condition also added difficulties to her job hunting.

Yen Mei said frankly that the death of her husband left a great impact to her life and she still cannot get through the grief of losing her husband. They got married after a blind date, and her husband could accept her medical condition. She described her husband as a caring man who took good care of his family and loved his wife and daughter. Her daughter was only six years old when her husband died, and she often misses her husband and she always cries together with her daughter.

“But now, I want to cheer up and stay strong for the sake of my daughter. I want to set a good example for her.”

The grandmother, Saw Lay Hoon was a kindergarten teacher when she was young. Her husband died early and she raised her children all by herself. Currently, the grandmother is taking care of her daughter and granddaughter. She also guides the granddaughter in her studies. Lay Hoon has high blood pressure and high cholesterol, and she has been feeling unwell recently. She is worried about the future of her daughter and granddaughter, hence she approached One Hope Charity for assistance.

After receiving the application, One Hope Charity made a home visit to review the case. One Hope Charity decided to raise RM100,000 to support Eecoo’s family and her education expenses for five years.