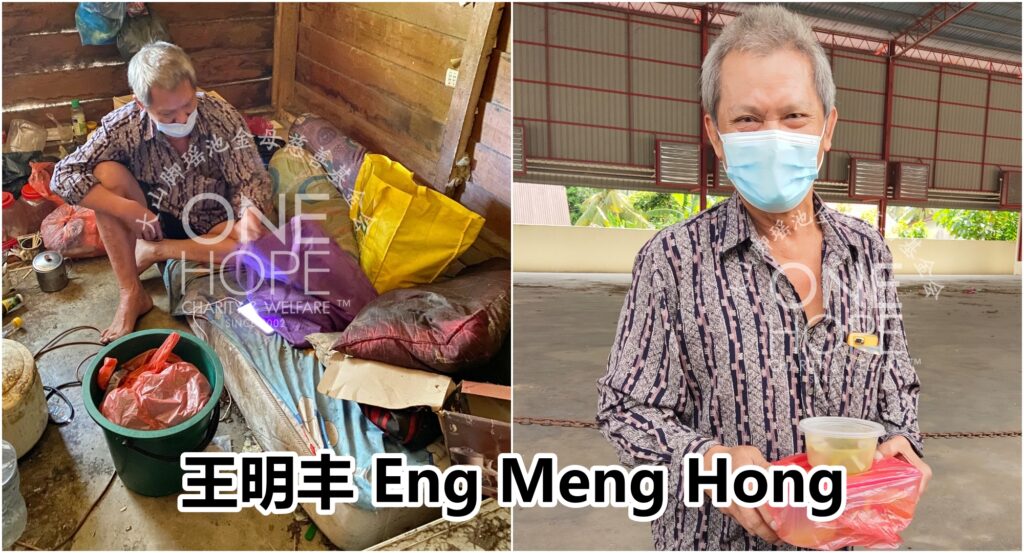 Single man Eng Meng Hong, who is in his 60s, suffers from rheumatoid arthritis for nearly 40 years. He was also being diagnosed with heart disease and underwent two heart surgeries. His health is deteriorating, and the lonely man pleads that the public can help him with his long-term medical expenses, as well as the cost of staying in a nursing home.

60-year-old Meng Hong from Sungai Bakap in Penang was diagnosed with heart disease last year and needed to take medications regularly. One Hope Charity has been subsidising RM400 each month for his medication fee.

Recently, he often suffers from shortness of breath and fatigue, so he asked for help for the second time, hoping to be admitted to a nursing home. He also registered as one of the beneficiaries of One Hope Charity’s “Promise of the Last Journey” so that someone could take charge of his funeral after his passing. Meng Hong’s wish is to donate his body and organs after his death to help the others in need.

【He suffered from arthritis, high blood pressure and diabetes at a young age, and he injected insulin every day to control his blood sugar level. He suddenly had chest pain last year and went to the hospital for examination, and was confirmed that three of his blood vessels were blocked】

Meng Hong sought medical help last year due to chest pain, and the doctor diagnosed him with a heart disease. He was referred to Penang Hospital for thorough examination, and the doctor performed a surgery to place a stent in his heart on the next day. In April this year, he sought medical attention for the second time due to chest pain, and he was immediately arranged for a second heart stent implantation surgery. However, he could not afford the medical bill of several hundred ringgit. One Hope Charity helped him to pay the full amount.

And now, he needs to take long-term medication to control his condition. The cost of his medication is RM400 a month. After a home visit, One Hope Charity approved his application to pay for his medicine expenses. Recently, he approached One Hope Charity once again to express his wish of staying in a nursing home.

Meng Hong was very interested in cooking. He went to Japan, Australia, United Kingdom and the Netherlands to work in restaurants when he was in his 20s. At that time, he also travelled while working. He returned to his hometown in Sungai Bakap when he was in his 30s. For the past decades, he has been doing various kind of jobs. Three years ago, he went to a hawker centre in Butterworth and became a food stall helper there, earning RM900 a month. However, he lost his job during the pandemic, and he has been relying on his Employees Provident Fund (EPF) for the past two years, and now, his remaining savings are almost exhausted.

For the past years, he has been living with his younger brother in Jawi, however, he does not have good relationship with the 58-year-old brother who works in a recycling centre. He feels sad and he hopes to move to a nursing home.

After reviewing the case following a home visit, One Hope Charity decided to assist him in raising RM66,000 to support his medical expenses and cost of staying in a nursing home for the next five years. One Hope Charity will also take care of him until the day he passes on. He agreed to fully authorise One Hope Charity to take charge of the fundraising and collect the donations from the well-wishers on his behalf.