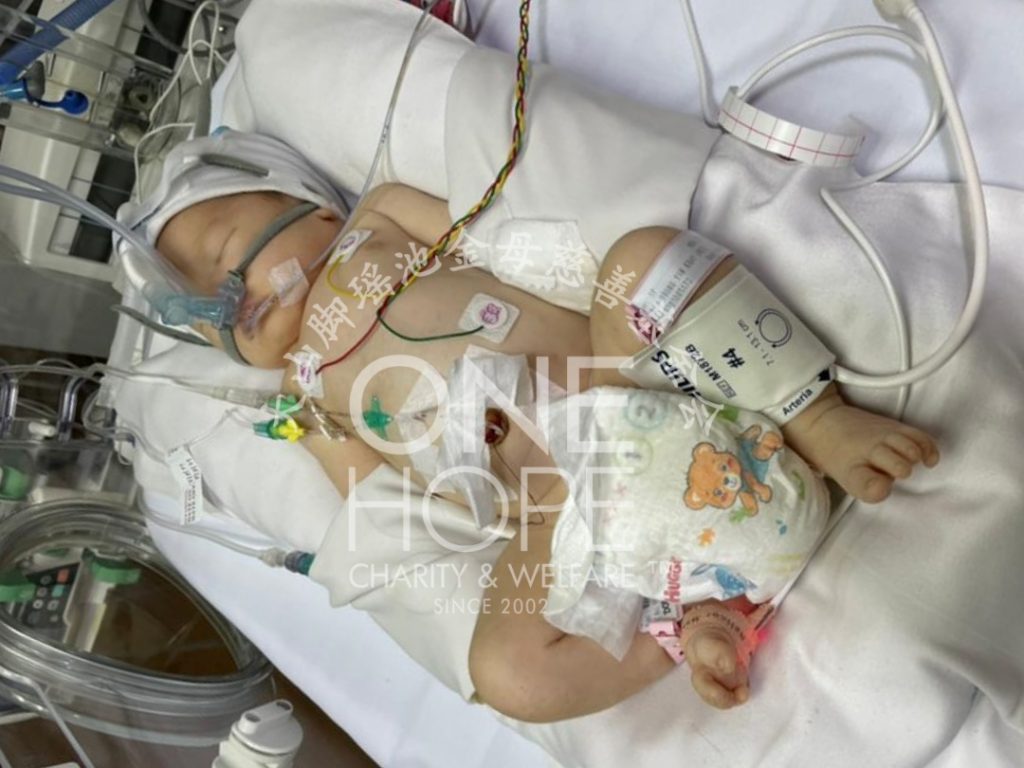 A baby girl was delivered early after found her inhaling meconium inside the mother’s womb. The baby’s body was decolored and showed signs of severe anemia. She is currently undergoing intensive care treatment and in need of RM60,000 to undergo surgery.

This coming two weeks will be a critical moment. We urged everyone to give her your donations and blessing to save her life!

A family in Ipoh was looking forward to welcoming the arrival of a baby girl. However, the mother expressed concerns when she noticed the lack of movement in the womb and had to deliver the baby before the expected date. The next morning, the mother was sent to hospital for a medical examination and found that the cervix had been opened by 3cm. The doctors were preparing for the delivery, but found that the fetal water was yellow, which later confirmed that it contained fecal matter, thus undergoing emergency C-section surgery.

Foo Zhi Yu was born on February 5, but right after she was delivered, her body was pale, she did not cry nor have any other responses. Additionally, the oxygen level within her body was low, and the doctors immediately sent her to the ICU for further examination. She is found that she has inhaled meconium, causing severe inflammation on her lungs and the obstruction of the airways.

Foo’s parents have been constantly worried for not only their child’s current condition, but also worried about the medical expenses. The parents approached One Hope Charity & Welfare for help, in hopes to raise RM60,000 for their baby’s medical fee.

It is confirmed that the baby girl has inhaled meconium which caused severe inflammation and the obstruction of her airway. It is expected that she will need to rely on a breathing machine and be watched in the ICU for two weeks. Should her condition worsen, the doctors need to extract the waste from her body.

After further medical examination, it is found that the lack of blood inside the baby girl’s body was due to thalassemia. Two packs of blood had been transfused to save her life and a comprehensive examination report would be released a week after.

The parents Foo Mun Hon, 33 and Yeong Yin Keay, 31, have a five-year-old son. After the successful birth of their first child, the husband has already allocated RM10,000 for his wife to prepare for the birth of the second child. However, the family did not expect the urgent medical condition, which left them concerned with the huge medical costs.

The father worked as a manager in a villa resort with a salary of RM4,800, but his pay had been cut short due to MCO. His wife started her own business in providing nail beauty services and MCO has severely affected her business.

After home visits and reviews, the One Hope Charity has agreed to help the family. The association will be in charge of holding the fund-raising activities and hope to collect donations from the public to save the life of a baby girl.