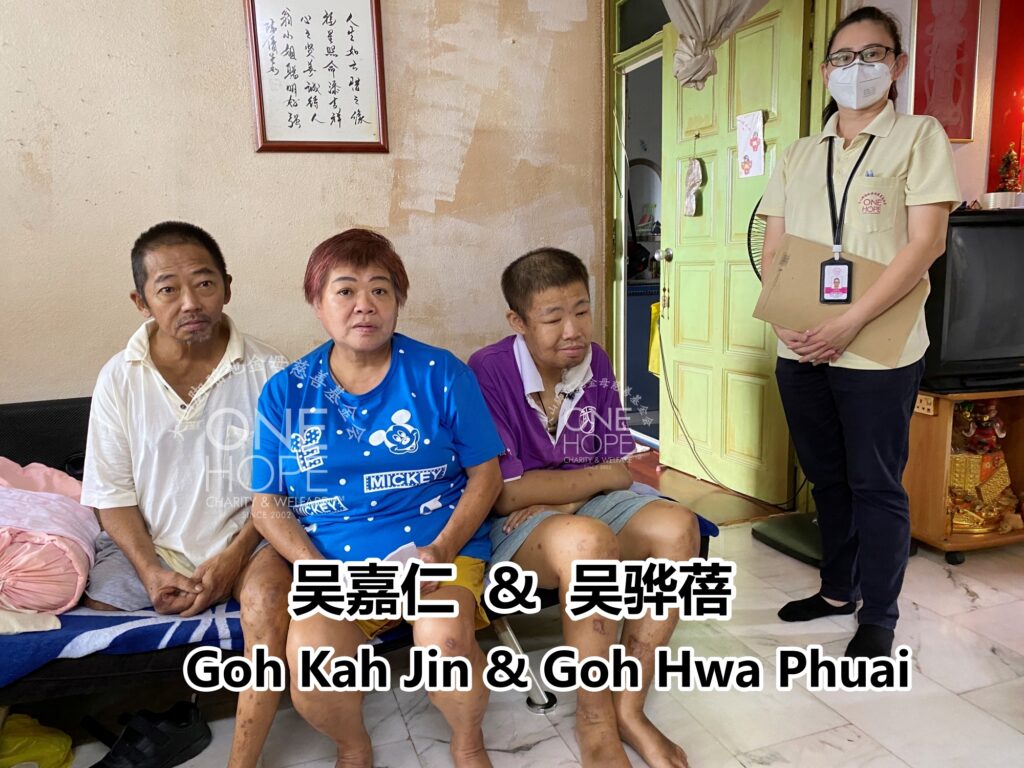 The husband who had his leg amputated needs dialysis; their son who is blind needs dialysis too. The woman in their family has been relying on a meagre income between RM20 and RM80 a day to support the family, but the medical expenses of the father-and-son amounting to at least RM6,000 a month. The family of three needs the public to assist them with their medical and living expenses.

56-year-old Ong Chung Lin is a hawker from Penang Island. Her family has a difficult life. Her 58-year-old husband Goh Kah Jin had his leg amputated, and he started dialysis in 2015. Their only son, 30-year-old Goh Hwa Phuai was originally an e-hailing driver. Although his income was not high but he could still support the family and his father’s erythropoietin injections. However, he had edema last year, and after he underwent a body check-up, it was revealed that he had kidney failure. He also lost his visions. And now, her husband and only son need a few thousand ringgits in medical expenses every month. The financial burdens are way too heavy for Chung Lin, who is now the sole breadwinner of her family.

Both the father-and-son need to undergo three rounds of dialysis every week. The father will go for his dialysis on every Tuesdays, Thursdays and Saturdays, while the son’s dialysis sessions are on Monday, Wednesday and Friday. In order to support her family and pay for the medical expenses, Chung Lin wakes up at 3.30am every day to go the coffee shop for her business. At around 10am, she will have to rush home to drive her loved ones for dialysis.

Chung Lin has to bear a monthly expenses of nearly RM6,000 but the income from the business is uncertain. She was overwhelmed as the medical and family expenses fall on her shoulder. Hence, she approached One Hope Charity for help. After a home visit and discussion, One Hope Charity decided to assist Goh family in raising RM82,500, to fund the father-and-son’s medical expenses and the family’s living expenses for one and a half year.

Chung Lin said that her husband started dialysis in 2015. As he was not amputated then, the couple sold food in a coffee shop in Penang Island to support the family. As the dialysis fee has been covered by SOCSO, they could afford the erythropoietin injections.

However, the fateful couple faced huge life challenge in 2020 when the husband’s health condition deteriorated. His right leg underwent three times of amputations, and his mobility has been greatly affected since then. He is no longer able to make a living with his wife, and their son Hwa Phuai took over the role to support the family as an e-hailing driver.

She said that she thought that she could still make a living though her own efforts, and his son was still able to support the family at that time, the family did not need to seek help from the others even they were not well off. Unexpectedly, her son also fell ill and needed dialysis, and he even lost his visions at a young age. She can’t afford the monthly expenses of about RM6,000 alone with her meagre income.

She added that her son always wanted to earn more money to support his family when he was healthy. And now, he always felt guilty and sad as he is ill and needs to be taken care of by his mother.

After reviewing the case, One Hope Charity decided to help the Goh family in raising the RM82,500 medical and living expenses. The family agreed to authorise One Hope Charity to take charge of the fundraising and collect donations from the well-wishers on their behalf.