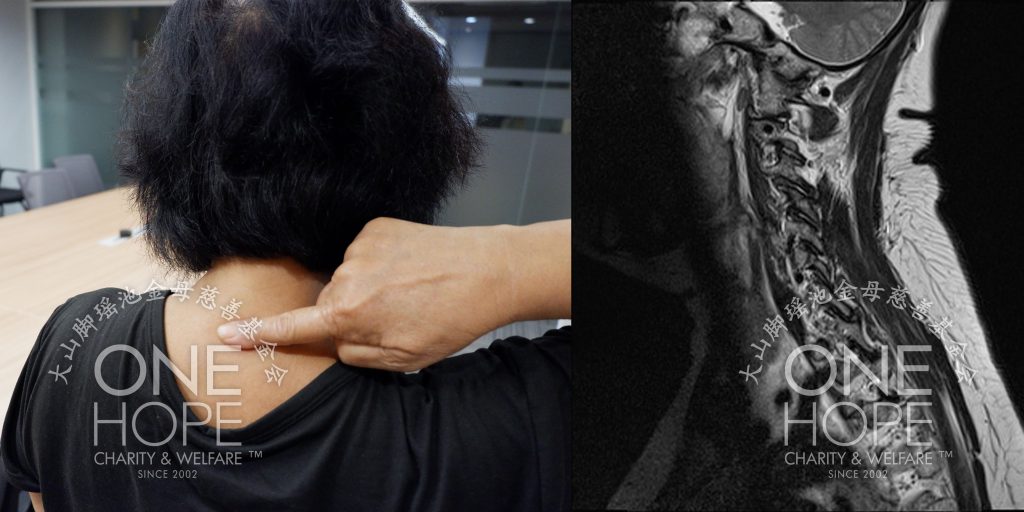 A woman ignored her fall injury 10 years ago, which unexpectedly led to constant pain every day. Regardless of sitting, standing, nor lying down, the pain still persists. She hoped that the public could help her get RM25,000 to undergo surgery and help get rid of her heart-wrenching pain.

Goh Gaik Kee, 57, from Seberang Perai had a fall injury 10 years ago. Back then it wasn’t too much for a problem, so she didn’t look for the doctor. What she did not expect was that her old injury began to relapse five years ago, when she noticed that her shoulders and neck began to feel sore. She had looked for the doctor and took medications, but she could not fully recover.

Nearly 2 months ago, she noticed that her pain turned intense. She could not sleep peacefully due to her pain and the worst part is that all her limbs began to feel numb. Concerned, she went to the hospital for checkup.

After undergoing a MRI scan, the doctor confirmed that the patient’s back had bone spurs, overwhelming the cartilage, which caused her the severe pain and in need to undergo surgery to resolve the issue.

Goh said that the pain has severely disrupted her daily lifestyle. Not only does she feel restless, the severe pain can’t be stopped even with painkillers. Plus, she is worried that the painkillers would affect the kidneys as well.

Goh Gaik Kee is a housewife and used to work with her elder sister at a hawker stall, but she stopped working due to her back pain. She did not buy insurance. Her father is an odd-job worker, currently working as a painter with a daily income of RM70.

Goh also has two sons: the eldest 31-year-old son is married but had never made contact with the family; The youngest son at 21 is currently single, lives with his parents and works in a private factory with a monthly income of RM1,600. They were unable to bear the surgery fee, hence they approached One Hope Charity for help.