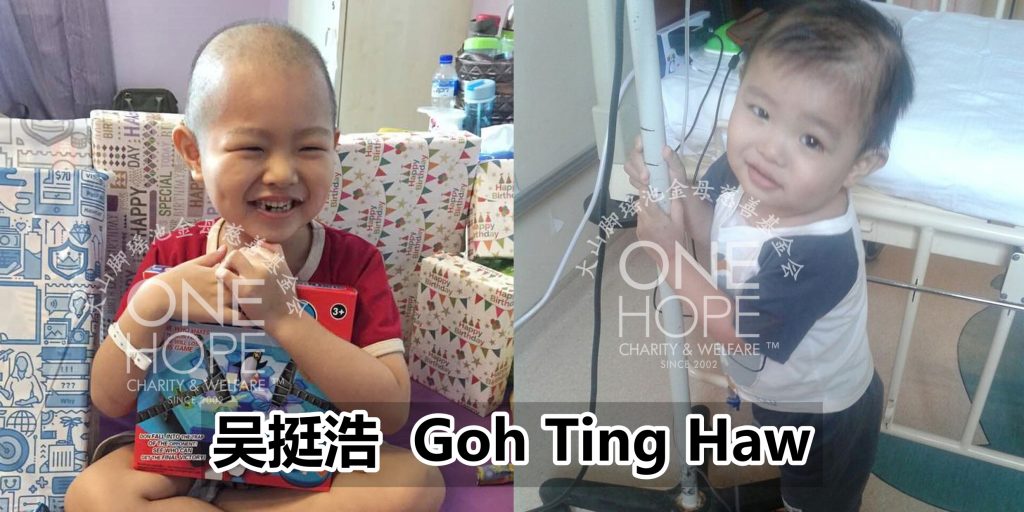 An eight-year-old boy has been fighting leukemia since he was one year old, but now he needs your strength to fight his battle.

When Goh Ting Haw is 21 months old he was diagnosed with leukemia. Chemotherapy and bone marrow transplant was proven to be ineffective, to the point that even his testis has been removed in order to prevent the cancer cells from spreading. The only treatment now is going to Singapore to undergo CAR T-cell treatment which has a recovery rate of 60%, but needed RM800,000 for the treatment.

After young Ting Haw from Johor has been suffering from leukemia, hospitals have been a regular place for him to visit in his life. Not only he wasn’t able to go to school like the others, but he spent more time receiving treatment in hospital. While the treatment seems miserable, the boy always put up a smile.

When he was one-year-old, he had to see the doctor due to fever, cough and diarrhea. But two weeks showed no sign of recovery. His face turned pale, and the parents left no choice but to look for a specialist for medical checkup. Report came out that his red blood cells and the blood platelets are extremely low, but his white blood cells counts are unusually high.

The doctor immediately provided him chemotherapy but in October 2017, his leukemia relapsed. Given with the doctor’s recommendation, he underwent bone marrow transplant in 2018, and his father donated his bone marrow.

Initially, Ting Haw could have escaped from leukemia and live a healthy life, yet the cancer didn’t leave him. In 2021, after Ting Haw went for examination, the doctor found out that his testes also had cancer cells. On March 15, he had his testiscles were surgically removed to prevent cancer cells from spreading.

Currently Goh Ting Haw is in a palliative care unit, fortelling that the boy has no hope in saving.

【A treatment with 60% recovery rate brings hope to Ting Haw】

Despite all odds, the father Goh Yee Min, 35, and mother Khor Pei Ling, 35, did not give up. Through various searches, they found out a hospital in Singapore that provides specialised treatment to leukemia, bringing a glimmer of hope.

However, that treatment costs up to 250,000 SGD (approximately RM800,000), and Ting Haw must stay in Singapore with mother for up to nine months, with a monthly expense of 2,500 SGD (around RM68,000). The parents had to borrow around just to settle these daily expenses, but the treatment fee of RM800,000 is too much for them, hence they approached One Hope Charity for help.

But to the parents, Ting Haw is a lovely child. Despite all the torment from leukemia, he never cries or yells, and even at times, he consoles his parents.

“Little Haw sometimes asked me why he got sick. After comforting him, he smiled back as if nothing ever happened. My child is warm and strong, purely a gift from God, so I will never give up on him.”

The father Goh Yee Min is an assistant operating manager with a monthly income of RM7,000 while the mother was formerly an administrative executive, but due to Ting Haw’s illness, she quitted her job to take care of him.

With all the leukemia treatments, the family has already spent all their savings and was unable to bear the RM800,000 treatment fee. Only the public donations can help save him.

The doctor first extracts a sample of T-cells from the patient's blood, and then recreates these T-cells to produce special structures called chimeric antigen receptors (CARs) on their surfaces. When these CAR T-cells are re-injected into the patient's body, these modified cells can recognize and attack cancer cells in the human body. The success rate of this therapy is as high as 60%.

This therapy is a very new type of leukemia therapy. To date, our country does not have such technology. However, the cost of this therapy is extremely high.