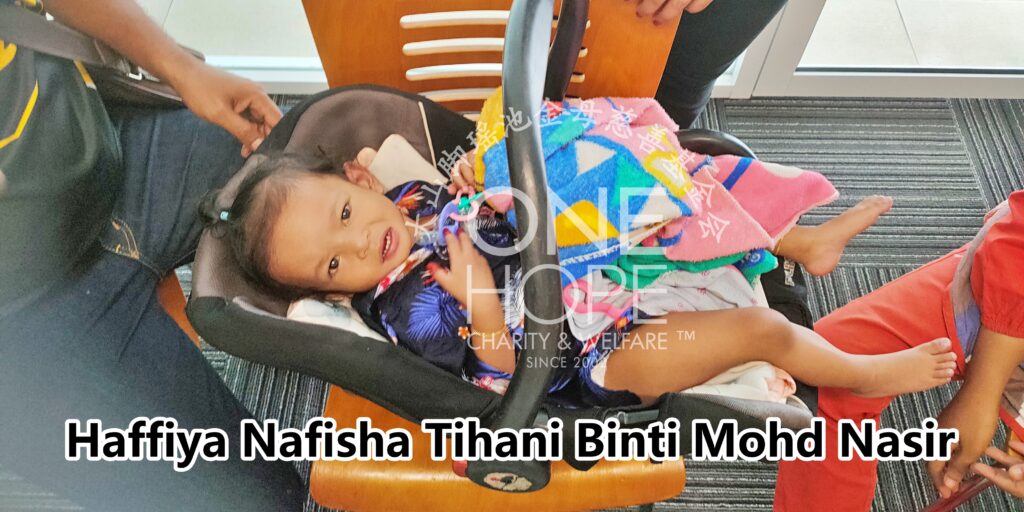 Two-year-old girl Haffiya Nafisha Tihani Bt Mohd Nasir from Padang Serai in Kedah, suffers from blue baby syndrome. She has cyanotic lips and nails, and she will experience shortness of breath when she walks. So the little girl chooses to crawl on the ground rather than walking.

She was diagnosed with severe congenital heart disease before she was born, but the doctor informed that she could not undergo surgery as her blood vessels were as thin as the hair, and she could only live for two years. Her has been relying on medication to control her condition. In a recent follow-up visit, the doctor noticed that her heart vessels had expended a little, so she is suitable to undergo the surgery. The parents were overjoyed and the good news regained their hope, so they actively sought help to raise the RM55,000 in surgical fee.

【The mother suffered from gestational diabetes. The baby was tested to have heart defect even before birth. The mother welcomed the birth of the girl with much anxiety】

The mother developed gestational diabetes when she was pregnant with her first child at the age of 26. When she was pregnant with her fifth child two years ago, the government hospital had arranged her to undergo a computed tomography (CT Scan), and the result showed that the fetus had congenital heart disease. The hospital arranged for the mother to undergo a caesarean section at 38 weeks of pregnancy. The newborn was rushed to the intensive care unit right after she was born, and she was hospitalised for 16 days for observation, and later referred to Penang Hospital for a detailed examination.

The examination results showed that the child had Tetralogy of Fallot (TOF) combined with Pulmonary Atresia (PA) and Major Aortopulmonary Collateral Artery (MAPCA), which is the rarest type of TOF. Her pulmonary artery is completely atretic instead of stenotic. At that time, the doctor informed that her blood vessels were as thin as the hair, so no surgery could be performed on her, and she could only control her condition by medication. The doctor also announced that she could only live for two years.

For the past two years, the girl always suffered from cyanosis. She will experience shortness of breath and hypoxia even when she walked for three steps. The condition of hypoxia got even worse when she started to cry. She chooses to crawl on the ground rather than walking and she does not like to eat rice. She only drinks milk, eat biscuits and bread, so she is very small in size and weighs only 8kg.

In June this year, she went for a regular follow-up visit. The doctor noticed that her heart vessels had expended, so she is suitable for surgery. The good news gave the parents new hope. The doctor informed that she needs to undergo three surgeries at different stages – first to expend the cardiovascular of the left and right atria, and then repair the hole in her heart.

Her 45-year-old father Mohd Nasir Bin Juhari is a lorry driver in a paper factory, earning RM2,000 a month. Her 36-year-old mother Kamsiah Bt Hassan is a housewife, but she makes and sell kuih in front of the house. She earns about RM700 a month to help the family. The couple have five children aged between two and 18.

The parents are unable to afford the surgical fee of their child. After reviewing the case following a home visit, One Hope Charity decided to assist in raising the RM55,000 in medical expenses. The family agreed to fully authorise One Hope Charity to take charge of the fundraising and collect the donations from the well-wishers on their behalf.