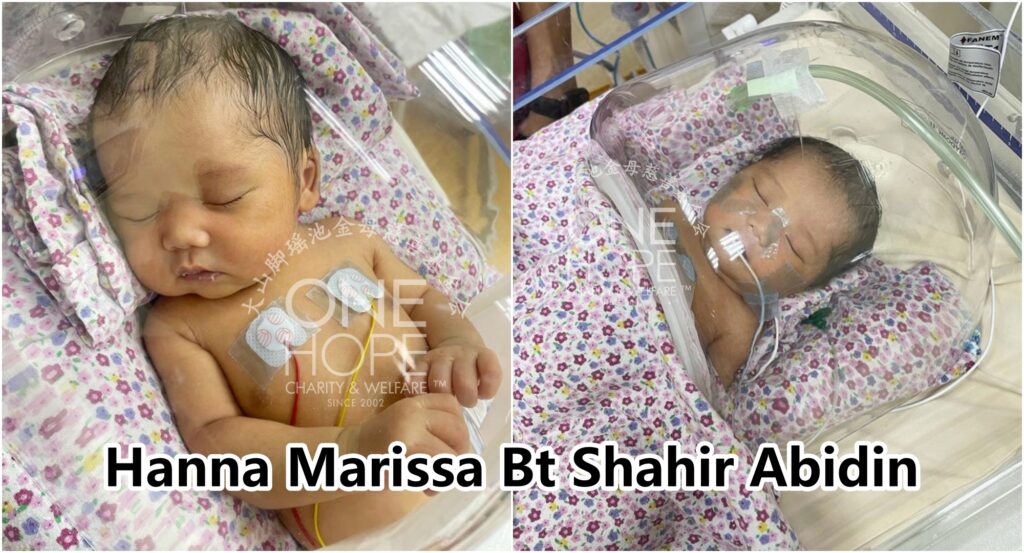 The now two-month-old baby girl was born with the umbilical cord wrapped around her neck. She was rushed to the intensive care unit for treatment. During that period, the oxygen level in her body was found to be low. She was transferred to the National Heart Institution (IJN) for a thorough check and she was diagnosed with a heart defect.

Baby girl Hanna Marissa Bt Shahir Abidin from Kuala Lumpur seems to be normal from outside. However, she will vomit, suffer from shortness of breath, or even turn have cyanotic lips when drinking milk or crying. She was diagnosed with congenital heart disease named total anomalous pulmonary venous drainage (TAPVD). In a recent examination, it was found that the blood has flowed into her lungs, which will eventually lead to pulmonary edema and heart failure. She is in a critical condition.

Her mother lost her job after her company closed down in June. Currently, they are relying on the father as the sole breadwinner of the family, so they do not have extra money to pay for the medical expenses. The parents beg the public to save their child.

【The doctor reminded that if the child cries and the body becomes cyanotic, the parents need to send her to the hospital immediately. The mother is worried about the child all day long, and she often check whether the child is breathing normally at night】

The baby girl was born on 9 June this year. She was born naturally after a full-term pregnancy. However, it was found that the umbilical cord was wrapped around her neck at birth, so the doctor sent her to the intensive care unit immediately. After 12 days of hospitalization, her swollen neck became better. Unexpectedly, the oxygen level in her body was low, and the doctor suspected that she had a heart problem, so she was referred to the National Heart Institution for diagnosis. She was later diagnosed with total anomalous pulmonary venous drainage (TAPVD). She needs urgent surgery, otherwise, her life will be in danger.

Although the baby girl seems normal, but she will suffer from shortness of breath, or become cyanotic when drinking milk or crying. The parents need to stop her from continuous crying to avoid hypoxia. They also need to monitor condition closely. As her condition is critical, the doctor provided two dates for the surgery. The doctor suggested her to undergo a surgery in early August, but the parents are unable to afford the surgery that cost RM50,000, so they chose the other date, which is at the end of August, and at the same time, they approached One Hope Charity for help.

The 31-year-old father Shahir Abidin Bin Idris works as a customer service in a bank with a salary of about RM5,000. Her 31-year-old mother Nur Faiqah Bt Miskat was an administrative executive in a company, but she lost her job after the company closed down in June. The couple also have a three-year-old son, and the family is now relying on the father as the sole breadwinner. They are facing financial difficulties, so they are unable to pay for the surgical fee.

After reviewing the case, One Hope Charity decided to assist in raising the RM50,000. The family agreed to fully authorise One Hope Charity to take charge of the fundraising and collect the donations from the well-wishers on their behalf.