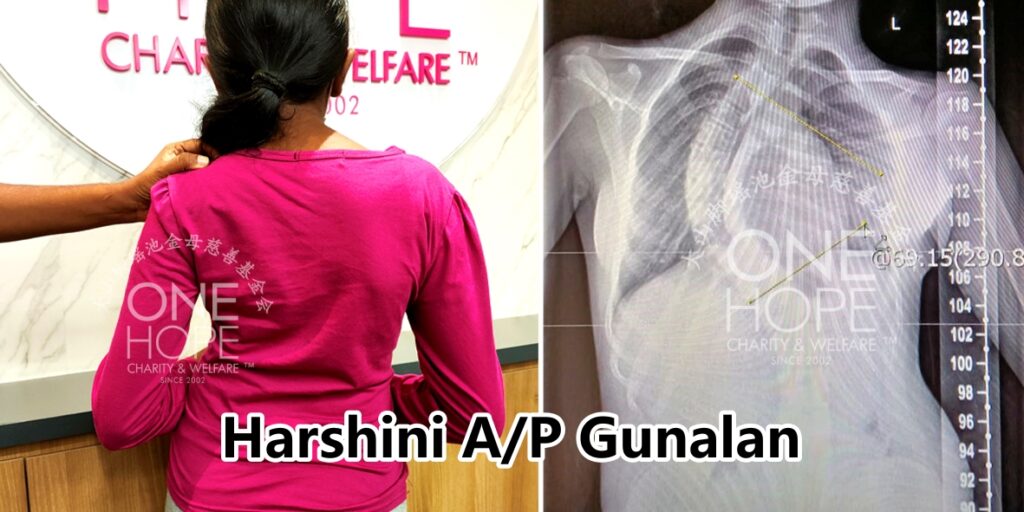 The daughter has abnormal gait and uneven shoulders, and she complained of back pain. After her parents took her to seek medical treatment, she was diagnosed with a 69-degree scoliosis. Further examination revealed that she also suffered from tonsillar herniation with cervicothoracic syrinx. She needs to undergo a surgery to drown out the cerebrospinal fluid before the spine correction surgery. The two surgeries cost a total of RM49,000.

13-year-old teenager Harshini A/P Gunalan from Penang Island, has always been healthy until October last year, when she started to complain about back pain frequently. Her parents felt something amiss and brought her to the hospital for treatment.

The doctor discovered that her spine was bent, and x-ray showed that she has a 69-degree scoliosis. She later underwent a magnetic resonance imaging (MRI) and it was found that her spine was filled with fluid, which is not an ordinary condition for scoliosis. Therefore, she needs to undergo a surgery to drown out the cerebrospinal fluid before the scoliosis corrective surgery.

Her 49-year-old father Gunalan A/L Ganesan was originally an engineering project technician, earning about RM3,000 a month. However, he was retrenched in September last year. And now, he grows fruits and vegetable alone in the open space next to his ancestral house in Taiping. As there is no harvest yet, so he has no income at the moment.

The couple also have a son and the mother is currently paying for all the family’s expenses, so they are unable to afford the medical expenses. After reviewing the case, One Hope Charity decided to help Harshini A/P Gunalan in raising the RM49,000 in medical expenses. Her family also agreed to fully authorise One Hope Charity to take charge of the fundraising and collect the donations from the well-wishers on their behalf.