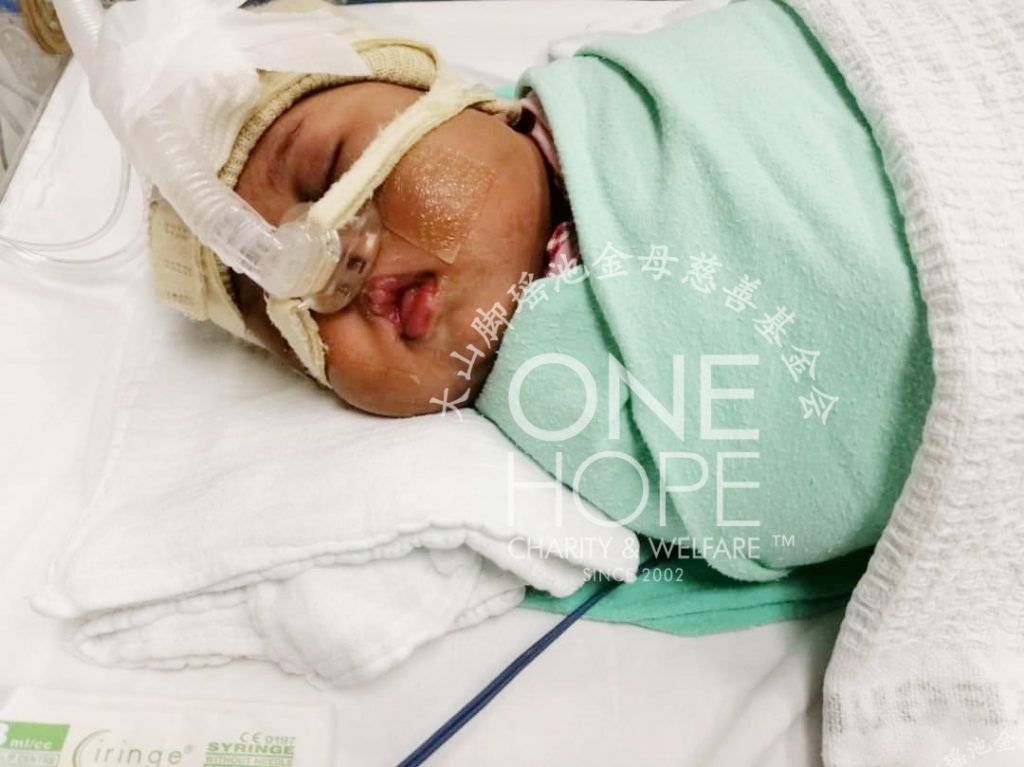 “She’s already 3 months old, but I still don’t get to have her in my arms… all I can get to see her is through the photos…”

A baby girl was diagnosed with a congenital heart disease and since three months after birth, the father had never get the chance to see her, let alone hold her within his arms. When we pled One Hope Charity to raise RM60,000 for his daughter’s surgery, he could not help but break down into tears, hoping that the public could lend a hand and help him reunite with his daughter soon.

When HAZIQAH HANNANI BT HAMZARUL is still inside her mother’s womb, she has been regularly checked by the doctors and found no abnormalities. The parents from Sungai Petani were looking forward to the birth of a new family member.

On Nov 15 last year, Haziqah was born and the delivery went smoothly. However, the doctor noticed that the baby showed irregularities in her heart rate and was immediately transferred to the neonatal ICU for further examination.

The newborn’s condition became stable four days after her birth and the doctor had approved her discharge. But two days after going back home, her body became more yellowish and the parents took her back to hospital once more. The doctor found out that her blood oxygen level was low and was again admitted to the neonatal ICU ward for further examination.

According to the doctor’s examination, it is confirmed that the newborn was suffering from atrial septal defect (ASD), sexy sun atrial septal defect, congestive heart failure, hypothyroidism, and chronic lung disease. Saving her life is a race against time, and the operation must be done immediately.

Ever since she had been admitted to the hospital the second time, she had not been back home. She must be equipped with a breathing aid and a feeding tube at all times. Her face has also swollen due to allergies, leaving her parents heartbroken.

Yesterday, when the parents approached our service centre and applied for aid, the father discussed his newborn daughter’s condition but could not hold on to his tears rolling down his face. Not only he did not get to hold his own daughter, but because of the COVID-19 pandemic, he was not allowed to visit her in the hospital. The most he could do for now was looking at the photos of her every single day to constantly be reminded of her and the suffering they had to go through.

Her father HAMZARUL HEERMAN BIN HAMDAN, 42, and mother HARNIZA BINTI MD HAIDAR @ SHAHIDAN, 42, worked as a quality control inspector for a factory, with monthly income of RM5,000 and RM3,000 respectively. The family has been taking care of four children, aged between 3 and 13.

The surgery fee for their youngest daughter was RM80,000, and the parents can only pay up to RM20,000. They still need RM60,000 and hoped that the public could help contribute to save their daughter.