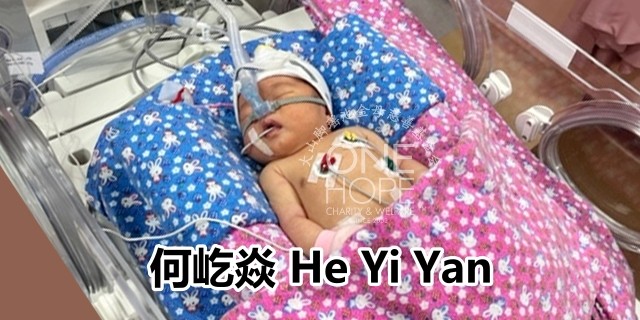 A 27-year-old mother had a difficult labour, causing her and the son to be on the brink of life and death. After fighting for her life, the mother was finally discharged from the hospital after three days. However, the newborn boy is still in the intensive care unit after suffering from hypoxia and pneumonia. The baby boy needs RM40,000 in medical expenses, please save him!

Newborn boy He Yi Yan from Sungai Siput, Perak was oversized but his 27-year-old mother Hui Huang Yee took the risk to give birth. The baby did not cry at birth, and he was rushed to the intensive care unit and relies on a breathing aid to survive. Examinations revealed that the baby suffered from subaponeurotic haemorrhage and pneumonia. He needs to stay in the intensive care unit for two weeks.

It was not easy for a mother to risk her life to give birth to a baby, and for Huang Yee, it was even tougher as she is physically and mentally exhausted as she needs to worry about the condition of her newborn, and at the same time, she is worried about the huge sum of medical expenses. In desperation, she sought assistance from One Hope Charity as her son needs RM40,000 in medical expenses, otherwise, his life is at stake.

【The fetus was oversized, and the newborn did not cry at birth but the little life was saved after rapid rescue】

The estimated due date for the baby was on April 7, but there was no sign of labour. The doctor suggested the mother to go for inducing labour the next day. Unexpectedly, the fetus was too large, and she had a difficult birth. The doctor used vacuum extraction to assist her delivery, and the baby had subaponeurotic haemorrhage. The newborn baby boy did not cry at birth as he suffered from hypoxia. After an emergency rescue and supply of oxygen, the baby finally cried. He was immediately rushed to the intensive care unit and is currently surviving on a breathing aid.

According to the doctor, the baby boy has an infection in his lungs and needs to stay in the intensive care unit for one to two weeks. The medical fee is expected to be RM40,000. Preliminary examination showed that the baby’s brain was not damaged, but regular tracking on his development is needed in the future.

His 27-year-old mother Huang Yee worked as a cashier in a convenience store in her hometown years back, and she went to Australia three years ago for studies. She also took up part-time job in a milk tea shop earning about AS$1,800 a month. Two years ago, she met a 28-year-old Chinese national man He Long Kai in Australia. Her husband works as a casual construction worker in Australia, earning about AS$3,000 a month. Earlier, due to the pandemic lockdown in Australia, his work and income was affected.

After Huang Yee became pregnant, the couple got married at the Malaysia Embassy in Australia in November last year. Huang Yee also returned to her parent’s home in Malaysia in February to prepare for her labour. The couple prepared RM5,000 for labour and confinement expenses. Unexpectedly, the hospital bill was RM5,000 when she was discharged, and she had exhausted the confinement expenses. She only paid RM500 deposit for her baby’s hospitalisation, and she does not have extra money for her son’s medical treatment.

The baby’s grandmother also begged for the assistance of One Hope Charity. After all, they can save on her daughter’s confinement, but her grandson’s medical fee is a huge amount, so she hopes that the public can lend them a helping hand.