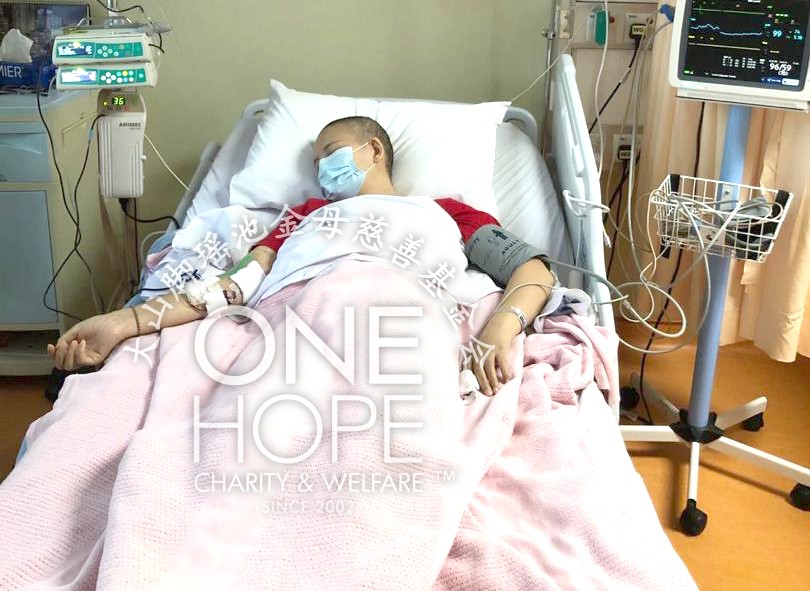 Huang Jing, who’s mother had passed away when young, was brought up by her grandmother. The 35-year-old mainland Chinese married to a Malaysian and was expecting to live a happy life. She hoped to give birth to their first child and have a family but had a miscarriage. She planned to try for another baby after six months of recuperation, but suddenly she felt dizzy and was later diagnosed with blood cancer. Her only hope of survival was to replace her bone marrow. Huang Jing pleads with the public to give her another chance in life.

A desperate young couple have been looking for help everywhere but to no avail until they managed to found One Hope Charity. When the Association’s volunteers made a home visit, Huang Jing suddenly went on her knees, cried and desperately begged for the public for aid. After the Association agreed to launch the fundraising campaign, she has also made a video to request the public for their aid.

【After going through nearly seven months of chemotherapy and several side effects, the cancer cells inside her body recurred and was told that she only had a few months to live. However, she carries on with the willpower to live until she finds a suitable bone marrow replacement】

Hailing from Wuhan, China, Huang Jing met her Malaysian husband under the introduction of a friend when she was travelling in Malaysia several years ago. The couple was married in 2018 and she hoped to give birth to their first child.

In 2019, she was pregnant with a child, but she had a miscarriage soon afterwards. Initially she planned to get pregnant again after six months of recuperation, but in February 2020, she frequently felt dizzy and her face looked pale. She also felt weak when walking a short distance, thus she was taken for a clinical checkup.

On March 16 last year, it was found out that there was abnormality in her blood and was transferred to a specialist hospital for further examination. What shocked her was that she was diagnosed with acute blood cancer and must undergo chemotherapy.

Even though she could not accept the news, Huang Jing still accepted the treatment. She underwent chemotherapy for up to seven months, spending every bit of her savings in the process to complete her treatment. However, not only her condition did not fully recover, but the remaining leukemia cancer cells continue to proliferate. The doctors informed that she only has a few months to live and her only hope of survival was to find a suitable bone marrow replacement for her.

Being told that only having a few months left to live is like giving a death sentence. But against all odds, Huang Jing remained strong-willed and her husband continued to search for a suitable bone marrow match for her.

After several months of searching, they finally found a suitable match for the transplant. At this period, Huang Jing still fights with cancer and often being transferred to the ICU, but now the hardest hurdle has been passed.

Her husband Ronnie Chong Han Wen, 38, is an online salesperson who mainly sell headphones and peripheral products of electronic devices online, earning about RM4,000 a month.