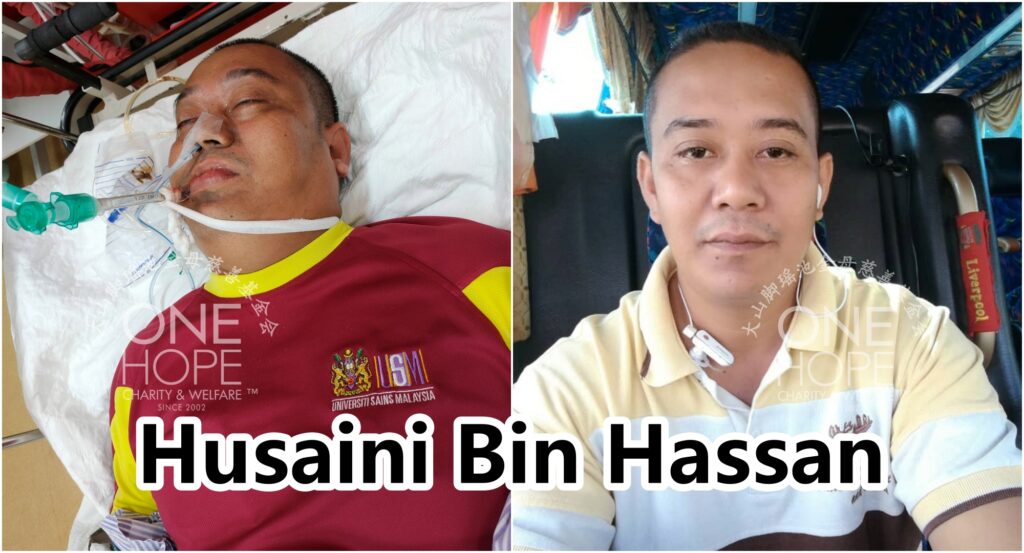 Important: Updated at 6 March 2022 4.45 pm, the fundraising for Husaini Bin Hassan had stopped immediately due to the patient is not suitable to perform surgery. The collected funds will use for the next patient.

The factory van driver felt uncomfortable on his way back after sending employees to the factory for work. He was discovered in weak condition, and when he was rushed to the hospital, he was diagnosed with a stroke. He is the breadwinner of the family, his wife and daughter are unable to afford his medical expenses. He is still short of RM60,000 in medical expenses.

49-year-old Husaini Bin Hassan is a responsible factory van driver. Although he wasn’t feeling well this morning, but he managed to send the workers to the factory safely. When he was on the way home, his condition worsened so he stopped the van by the roadside and called his wife.

At that time, he only called his wife’s name three times and could no longer speak. The wife sensed something was wrong and quickly called her husband’s brother and employer. The employer managed to locate Husaini through vehicle tracking system and immediately drove to the location. Husaini was found weak. His limbs were unable to move, and he could only move and swung his head.

Upon seeing this, the employer immediately called an ambulance, and he was rushed to the hospital for examination. The doctor confirmed that he suffered a stroke and anticoagulant was unable to help in clearing the blood clot in his brain. He must be referred to the only specialist hospital that has the technology to perform Mechanical Thrombectomy in Northern Malaysia within the golden window, but the family is worried about the surgical fee that cost RM60,000.

Stroke patients must undergo emergency surgery within the golden window to minimise the damages to their brain, as well as to reduce the sequelae of stroke. Therefore, One Hope Charity approved this emergency case immediately after reviewing it, so that the patient can be transferred to the specialist hospital for surgery as quickly as possible to save his life.

【He started to feel unwell three days ago but he still worked hard. Unexpectedly, he was diagnosed with a stroke and at the same time was tested positive for Covid-19】

Husaini from Padang Serai in Kedah, suffered a mild stroke five years ago. After rehabilitation, he has recovered and is able to work to support his family. He also has diabetes and high blood pressure, but he always went for regular check-ups. Several days ago, he went to a clinic for follow-up and the doctor discovered that his blood pressure was high, and arranged him to undergo a blood test in June.

Three days ago, he started to feel unwell, but he still insisted to work. Unexpectedly, after sending factory workers to work at around 6am this morning, he suffered a stroke and was semi-conscious in the driver’s seat. Fortunately, he managed to make a distress call to his wife for help, and his employer managed to locate him and sent him to the hospital for emergency treatment in time.

Husaini is a factory van driver, earning about RM2,000 a month. His 42-year-old Indonesian wife Siti Mariam Tampubolon is a housewife. They have a six-year-old daughter, and they are unable to afford huge amount of surgical fee.

After reviewing the case, One Hope Charity decided to help him in raising the RM60,000 in medical expenses. His family agreed to authorise One Hope Charity to take charge of the fundraising and collect donations from the well-wishers on their behalf.