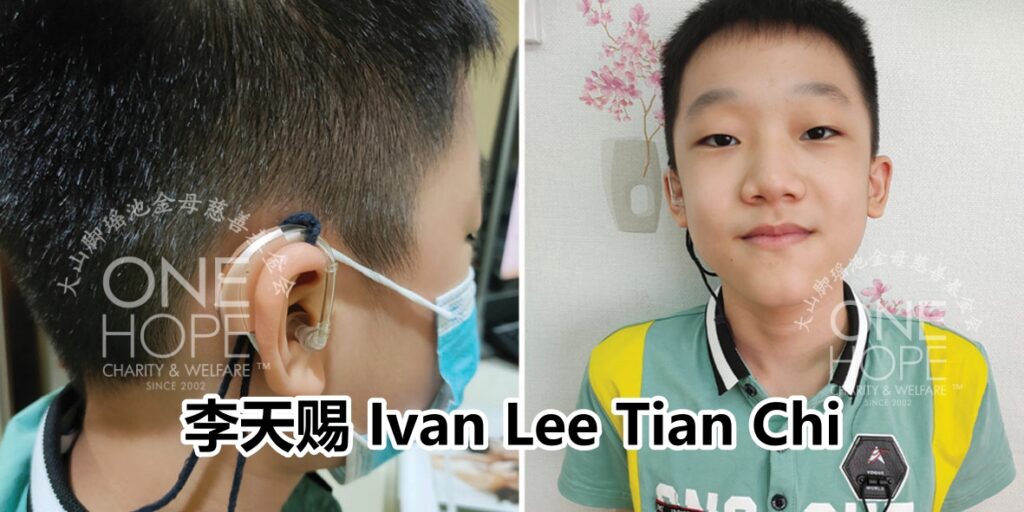 A 12-year-old left-behind child has been taken care by his grandparents since he was three months old. His left ear suddenly turned deaf two years ago, and now, there is only 30% of hearing is left in his right ear. Hearing aid could not help him. If he wants to get out of the silent world, he will need RM106,700 to undergo a cochlear implant.

Ivan Lee Tian Chi is from Menglembu in Perak. His parents divorced shortly after he was born, and he became a left-behind child raised up by his grandparents. Two years ago, when he was 10 years old, he did not respond when his grandmother called his name at close range from behind. After examination, it was found that he had complete hearing loss in his left ear.

There is a glimmer of hope that a cochlear implant can be carried out in his left ear as he is still young. The result left his grandparents happy, but at the same time, they are worried about the medical fee. The two elders are unable to afford the huge sum of medical fee, hence they approached One Hope Charity, hoping to raise funds for the boy’s for their grandson to undergo the cochlear implant surgery.

During an initial examination, the audiologist suggested that Ivan could first wear a hearing aid in his right ear to determine if the hearing aid could help to improve his hearing in the right ear. However, after six months, which was in June last year, another examination revealed that the hearing in his right ear did not progress. Therefore, the audiologist recommended him to undergo a cochlear implant in the left ear, so that his both ears can slowly regain its hearing ability.

The total cost of cochlear implantation is RM106,700, of which RM81,700 is the cost of the electronic cochleae, and the remaining RM25,000 will be used for the surgical fee and hospitalisation charges.

Ivan Lee has been taken care of by his grandparents since he was born. His 63-year-old grandfather Lee Fook Weng is an automobile body repairer with a monthly salary of about RM1,000. His 60-year-old grandmother Wong Yoke Chun is a housewife. The elderly couple and their grandson are not from a well-to-do family and they are unable to afford the cost of cochlear implantation.

【Grandmother Wong Yoke Chun: My grandson Ivan is very well-behaved and an obedient boy, and as he grows up, he is always helpful and assist me with the house chores】

Ivan is the grandson raised up by the two elders since he was born. He is well-behaved and obedient, and his academic and other performances are good too.

The two elders begged kind-hearted people to help them, so that their grandson can undergo the cochlear implantation as soon as possible to regain his hearing ability, so that he can return to school healthily and communicate with his schoolmates and friends.

Yoke Chun said that her grandson was watching TV two years ago, and she called him from the back but got no response. At that time, she thought that the child was naughty and deliberately ignored her, but the grandson told her that he really couldn’t hear his grandmother calling him.

After the grandson told her the truth, Yoke Chun was very worried and immediately brought him to a clinic for a check. It was initially thought that it was due to uncleared earwax, but after removing the earwax, Ivan still told his grandparents that he could not hear.

The panicked grandmother brought the grandson to the ENT specialist for another examination and the result shocked her. Little Ivan had completely lost the hearing in his left ear, and only 30% of his hearing was left in the right ear.

Yoke Chun said that Ivan did not have hearing problem when he was young, and she thought that everything was just a sudden incident. She later brought her to a hospital for thorough check, and the result remained the same – complete deaf in his left ear, and 30% hearing ability in his right ear.

After reviewing the case, One Hope Charity decided to help Ivan to raise RM106,700 for his cochlear implantation. His family agreed to authorise One Hope Charity to take charge of the fundraising and collect donations from the well-wishers on their behalf.