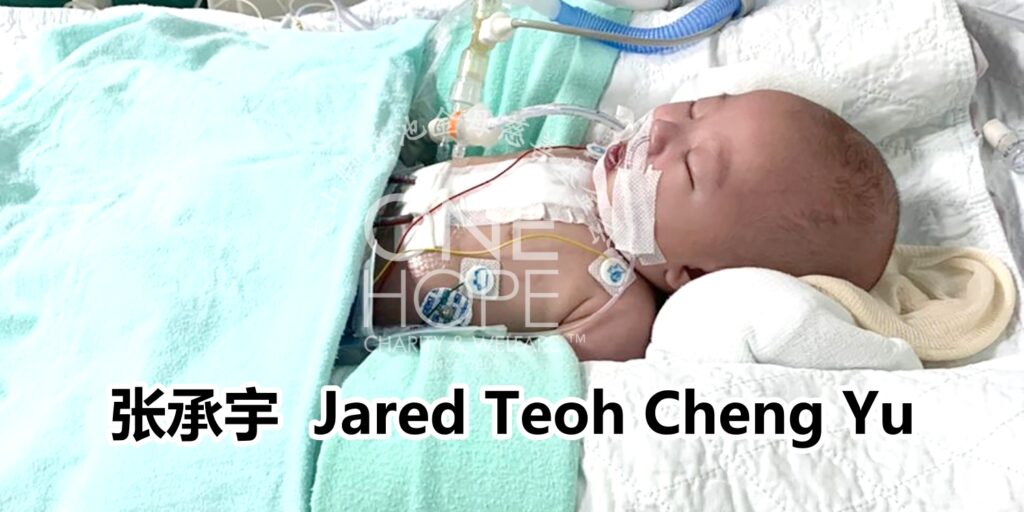 He is a lively and active one-year-old boy, and he is also very curious about the things around him. He is now in the toddler stage learning how to walk, and he likes to climb up and down. When he moves too much, he will experience shortness of breath. When he cries excessively, his lips and nails will become cyanotic. His life is like a time bomb as no one knows when his heart will stop unexpectedly.

One-year-old boy Jared Teoh Cheng Yu from Penang, seems to be very lively, but he was actually suffered from serious heart disease. He had a surgery when he was four months old to relieve his condition, but his mother is still worried as she does not know when her son’s condition will deteriorate.

The doctor informed that the child needs to undergo a third surgery when his weight reaches 8kg, and now, he is suitable to undergo the surgery, but he is in urgent need of RM80,000 to save his life. His parents pleads the public to save their son.

【Everything was normal when he was born. However, he went to seek medical treatment when he was four months old due to vomiting, and was referred to a hospital for examination. He was later diagnosed with serious heart disease and underwent an emergency surgery which terrified his new parents】

Since his mother was pregnant, Jared appeared normal until birth. He weighed 2.1kg and he is the apple of the eyes of his parents. However, as he is the first born and his parents were inexperienced, they did not know that his lips and nails became cyanotic when he cried or moved excessively was a symptom of hypoxia.

Until the baby was four months old, he cried and vomited, so he was brought to the clinic. The doctor discovered that his lips and nails were cyanotic, and concluded that he had a heart problem, so the doctor wrote a letter of recommendation and urgently referred him to the emergency department of Penang Hospital.

After careful examination by the doctor in the hospital, it was confirmed that the baby suffered from severe Tetralogy of Fallot (TOF), namely congenital cardiovascular malfunction, pulmonary valve stenosis, ventricular septal defect and right ventricular hypertrophy. The baby has had a Blalock-Taussig shunt on 14 September 2021 to reduce the cyanosis.

On 23 September 2021, he suffered from plication of right hemidiaphragm and underwent another surgery. And now, he needs to undergo a third heart repair surgery, hoping that he can grow up safely and healthily after the surgery.

His mother is worried everyday as she did not know when the baby will have a cardiac arrest. She is also very afraid that the child will leave them suddenly. She lives in fear every day, and when her child cries, she will try to comfort him immediately to prevent him from excessive oxygen consumption which will cause hypoxia.

The child went for a regular check-up last week and was told that he needs to undergo a surgery as soon as possible, but the parents are worried as they are unable to afford the RM80,000.

His 30-year-old father Teoh Chen Tit is a worker at a furniture factory, earning about RM1,800 a month. His 31-year-old mother Khor Ru Pin resigned and stayed at home to take care of her child. She was originally a worker at a garment factory with a monthly salary of RM2,000. The child was originally taken care of by his grandmother, but since he was diagnosed with congenital heart disease and had to use a catheter to drink milk, the mother forced to quit her job to take care of their only child.

The family of three currently relies on the father’s meagre income to cover their daily expenses, and they are unable to afford the huge amount of medical expenses, hence they approached One Hope Charity for help.

After reviewing the case, One Hope Charity decided to help baby Jared Teoh in raising the surgical cost of RM80,000. His family agreed to fully authorise One Hope Charity to take charge of the fundraising and collect the donations from the public on their behalf.