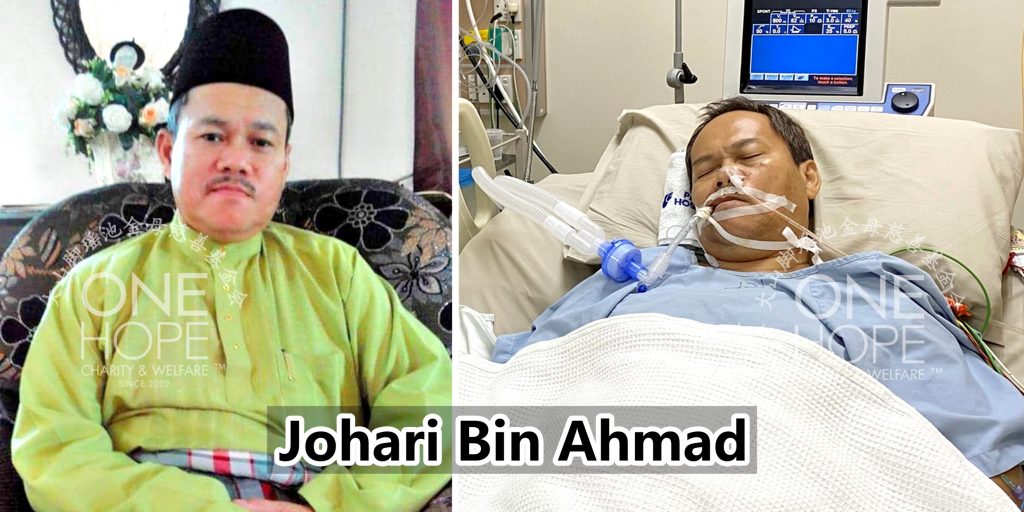 A father is like a big tree that provides care and shelter to the family. However, a loving father suddenly collapsed after suffering from a stroke. His panicked children were hoping that their little savings could save their father but unfortunately, they are still short of RM36,000. His daughters cried and pleaded for public to help and donate in order to save the life of their loved one.

65-year-old Johari bin Ahmad from Butterworth, Penang, suffered from severe headache on June 28 and collapsed out of a sudden, terrifying his daughters who were by his side then.

After he collapsed, he couldn’t even open his eyes, but he still managed to force himself to speak and asked his daughters to send him to the hospital. They called the ambulance immediately.

The doctor conducted a brain scan for him and found out that there were blood clots in his brain. He was confirmed to have suffer from a stroke, and he was treated with serum albumin.

However, the medication could not clear the blood clots in his brain. The doctor suggested to send him to the only hospital in Northern Malaysia that conducts mechanical thrombectomy, as this is the best treatment for acute ischemic stroke. If the blood clots could be removed in the golden window, the recovery rate could be as high as 60% to 100%. However, the surgical fee is RM50,000, and his daughters could only afford RM14,000. There is still a shortfall of RM36,000.

This is an urgent case as the patient could have high chance of recovery if he managed to undergo mechanical thrombectomy during the golden window. Therefore, One Hope Charity has been racing against time after receiving help request from Johari’s family, hoping that he could receive the necessary treatment as soon as possible.

As the father, who used to be like a big tree to the family fell ill, the children felt helpless and lost. Hence, the approached One Hope Charity for help, and we decided to help the family to raise RM36,000 to help them to overcome their problem temporarily.