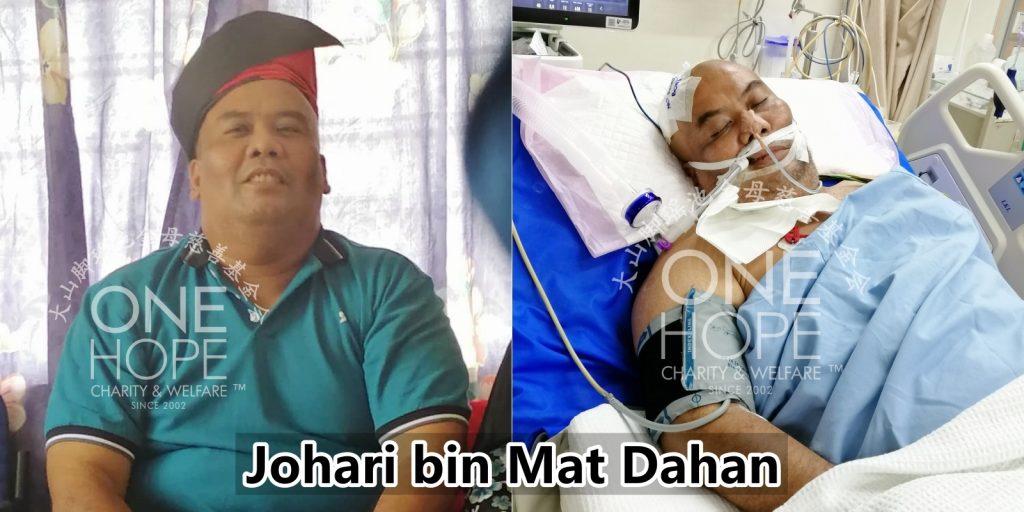 For the past two days, a family was celebrating a simple yet auspicious Hari Raya Aidilfitri. But a day after that, the breadwinner of the family suddenly fell down. He was diagnosed with a stroke and has already undergone surgery to remove any blood clots, but there has been no progress. Further examination found that part of his brain cells are dead, hence the doctor advised for a second surgery. The cost of the medical fee is around RM83,000.

Johari bin Mat Dahan, 53, was celebrating the festival with his wife and three children in Seberang Perai. On May 15, after he had his breakfast, he told his family that he felt dizzy and had to lie down and rest for awhile. However, the kids found out that his eyes looked pale, and his speech was constantly mumbling, which later found out that he started to drool unconditionally.

After noticing these signs, they called in an ambulance and quickly sent him to the hospital. The doctor confirmed that the father had suffered a severe stroke, and needed to be transferred to the only specialist hospital in the Northern region that has mechanical thrombectomy services, but it comes with a hefty price.

Two of Johari’s sons are already working, but the pandemic has led to one losing their job, and the other with a meager salary. The living expense of the family of five has been dependent on the father, hence the family has appealed to One Hope Charity for help.

One Hope Charity immediately conducted reviews and negotiations, and later agreed to help. At the same time, the hospital has arranged the transfer of the patient, and the surgery will be held this evening. Yesterday, there was a swollen lump behind the left side of the patient’s brain, which further examination concluded that part of his brain cells were dead. He needs to undergo surgery as soon as possible, before his condition becomes worse.

Today, the doctor has already conducted a 5-hour surgery on him, which the doctor said is a very complicated operation. If they hadn’t undergone the surgery or was there any delay, the father could have lost his life. Johari currently is in ICU ward for further examination, but in need of RM83,000 to pay for the medical expenses.

Johari is a land surveying supervisor in an affiliated company with a monthly salary of RM2,500. His wife, 50, is a housewife. His eldest daughter, 28, formerly worked in a teppanyaki business, but it was closed two months later due to the pandemic. The son, 24, is a factory operator with a monthly salary of RM1,500. The youngest among the family is an 11-year-old son.