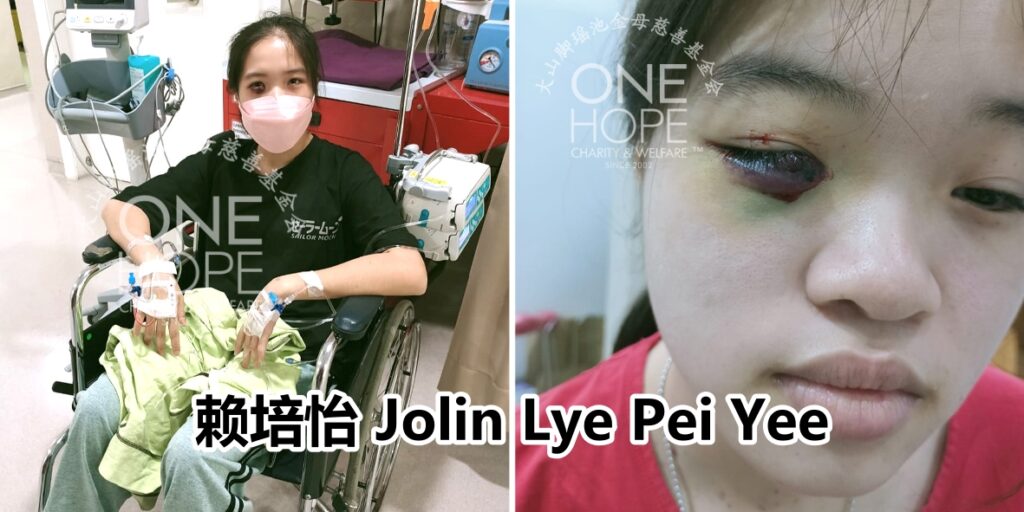 The cheerful and lively secondary school girl was just like other teenage girls. She receives her education and at the same time, having a lot of dreams about her future. However, a sudden bad news changed her life and her future.

16-year-old Jolin Lye Pei Yee from Bukit Mertajam discovered bruises all over her body in November last year, especially the bruises around her eyes made her looked like she was beaten by someone. Her mother worried that she had an infection and brought her to an eye specialist for a check, and she was given antibiotics to relieve her condition. Jolin started to lost her appetite later on and she suspected it was caused by the medicines, so the mother sent her to the hospital for examination.

The blood test report showed that her white blood cell count was high and it was confirmed that she was suffering from acute myeloid leukaemia (AML). Her condition was critical, and she might suffer from cerebral hemorrhage or stroke, so the doctor immediately arranged her to undergo chemotherapy, and she also needed a bone marrow transplant. She is in urgent need of RM177,000 in medical expenses but her parents are unable to afford it, so they beg for public assistance.

【She was once depressed but her family members encouraged her to receive treatment positively. She hopes that she can recover one day so that she can continue to study and pursue her dreams】

After Jolin was diagnosed with acute myeloid leukaemia (AML), the doctor immediately arranged her to undergo chemotherapy and the hospital seemed to become her second home. She needed to be hospitalised for a month for every treatment course.

So far, Jolin has completed five treatment courses and her insurance has covered the medical expenses of a few hundred thousand ringgit. The doctor also recommended her to undergo bone marrow transplant.

Jolin has a 18-year-old brother, but their bone marrows could not match. The Singapore Bone Marrow Bank had selected two potential bone marrow donors for matching and successfully matched the bone marrow from a donor from China. The bone marrow transplan is expected to be carried out at Ampang Hospital in July.

Although Jolin has medical insurance, but the insurance company does not cover the cost of bone marrow search, matching and transplantation, and her family cannot afford the cost, so they hope that the public can help them.

Besides worrying about the huge amount of medical expenses, the family also needs to think about the expenses during and after the bone marrow transplant at Ampang Hospital. The mother and daughter need to stay in Kuala Lumpur for three months for observation and follow-up visits, and those are a huge financial burden for a mother who works as a hawker.

Her 39-year-old mother Anne Lim Chee Ying has been divorced from her ex-husband for more than a decade. They have two children – the 18-year-old eldest son lives with the father and 16-year-old Jolin lives with her mother.

And now, the mother works as a hawker earn about RM4,000 a month after deducting the business operating cost. However, the lockdown earlier had exhausted most of their savings, and they still need to pay for the housing and car loans. So they have not much left for the daughter’s treatment.

After reviewing the case, One Hope Charity decided to help Jolin in raising the medical and living expenses for three months for her bone marrow transplant. Her family agreed to fully authorise One Hope Charity to take charge of the fundraising and collect the donations from the public on their behalf.