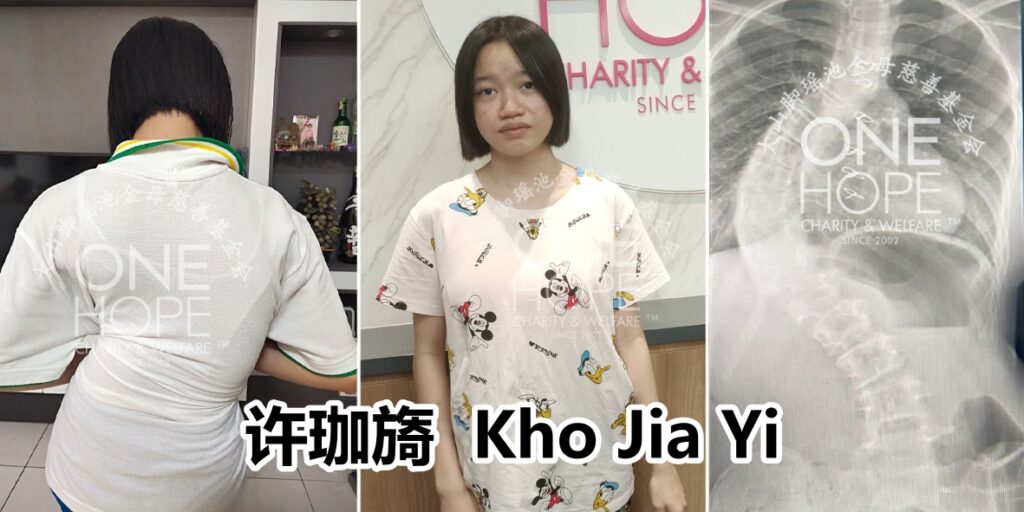 A birthday celebration photograph revealed that the 13-year-old girl suffered from a 45-degree scoliosis. She relied on insoles and physiotherapy to maintain her condition. Unexpectedly, the curve in her spine deteriorated to 88 degrees two years later, which shocked the parents. The doctor said that her situation is serious, and she needs to undergo a corrective surgery. If the spinal curvature worsens, compression and contortion of her internal organs might happen, which would put her life in danger.

Kho Jia Yi from Penang suffered from congenital heart disease. She underwent a heart surgery at the age of five. After that, she grew up healthily. She has a lot of dreams, but the scoliosis affected her life. The parents were shocked and actively brought her for medical consultations, but the surgical fee cost RM60,000. It is an amount that they are unable to afford, so they hope that the public can help them.

【She had a hole in the heart and cardiovascular stenosis at birth. She underwent a surgery when she was five years old and she was saved. And now, she needed a corrective surgery for her scoliosis, so the parents can only pray for a smooth surgery】

Jia Yi was diagnosed with a hole in the heart and cardiovascular stenosis right after she was born. However, she was asymptomatic and she did not need a surgery. However, the hole in the heart failed to shut by itself when she was over four years old, so the doctor performed a heart repair surgery for her, and Jia Yi grew up healthily after that.

Two years ago, Jia Yi’s parents celebrated her birthday, and they noticed that how their daughter dressed up was strange during a photo session. They immediately discovered that their daughter had a spinal problem. They went to a clinic for x-ray and found out that she had a 45-degree scoliosis. However, the Covid-19 situation was serious at that time, so the girl only relied on special insoles and physiotherapy to avoid her condition from deteriorating.

In April this year, the parents finally brought her to a hospital for examination. The doctor told that her condition had deteriorated. She needed a corrective surgery, so the doctor referred her to UM Medical Centre for treatment, and the surgery cost was estimated to be RM60,000.

The previous tests and treatments have already cost a lot, and the father’s job was affected during the pandemic, so the family has been relying on their savings to live. And now, they can only afford the expenditure during the treatment, and they are unable to pay for the huge surgical fee. Hence, they approached One Hope Charity for help.

Her 48-year-old father Kho Cheng Soon is a supervisor at the construction site, earning RM3,500 a month. Her 50-year-old mother Lam Kooi Kee is a housewife. The couple have three children. Their 22-year-old eldest son and 19-year-old second son are food delivery men and they are supporting themselves.

After reviewing the case, One Hope Charity decided to assist Jia Yi in raising the RM60,000 in medical expenses. The family agreed to fully authorise One Hope Charity to take charge of the fundraising and collect donations from the well-wishers on their behalf.