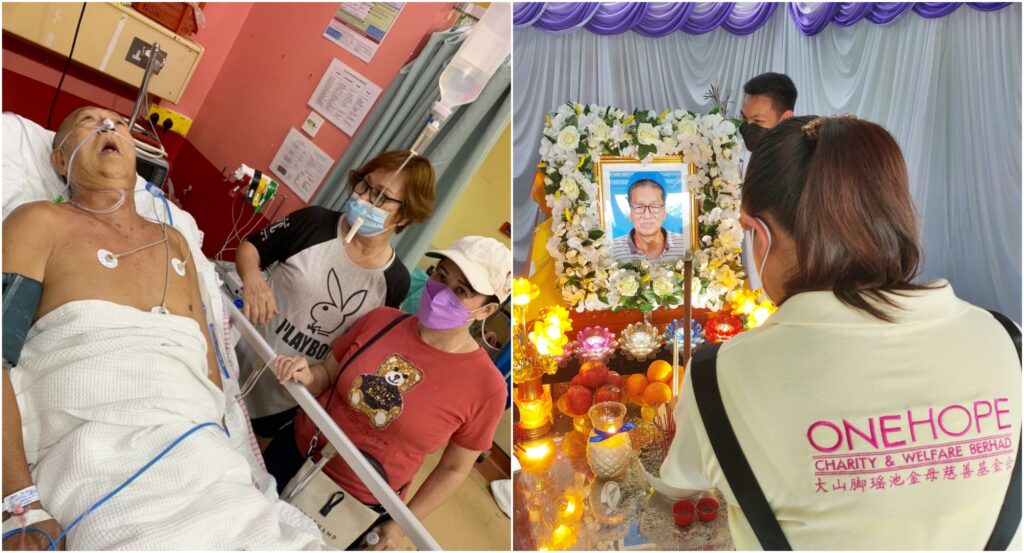 Every ordinary father is a superman to their family. This 63-year-old renovation worker was also a super dad in the eyes of his children and grandchildren. He always put his family ahead off everything, even ignoring his own health. Last week, he suddenly felt dizzy and started foaming at the mouth. He was rushed to the hospital and was diagnosed with a stroke. He underwent an emergency surgery but he died during the observation period.

Khoh Su Hiang from Nibong Tebal, South Seberang Prai, had always been healthy and free from any illness, and he was very helpful and never rejected requests from the others, so his children and grandchildren always called him Superman. On last Friday (27 May), after he assisted his neighbour in grass cutting, he felt dizzy and returned to home for rest. After he had some porridge, he fell asleep on the floor.

Unexpectedly, his wife found him vomiting and foaming after she got out from the bathroom, and she quickly called an ambulance to send him to the hospital. At that time, the doctor suspected a stroke as preliminary examination revealed that his blood pressure was high. He was transferred to Seberang Jaya Hospital for a thorough examination and he was diagnosed with a stroke.

His condition was serious and needed to be transferred immediately to a specialist hospital for mechanical thrombectomy. He was in a critical condition. At that time, his children urgently sought assistance from One Hope Charity, and after reviewing the case and understanding hie situation from the hospital, One Hope Charity approved the application immediately.

His 36-year-old son Khoh Khang Loong said that the children were very touched and grateful when they learned that One Hope Charity agreed to assist their father with RM42,000 in surgical fee, which was a huge amount. As everyone did not give up on their father, it gave him the opportunity to have the surgery and had a chance to survive.

He said that his father had the surgery on that immediate night, and the doctor only discovered that he had a haemorrhage in the brain, and he needed to be transferred to Penang Hospital for blood clot removal after the mechanical thrombectomy. However, when he was transferred to Penang Hospital on Saturday, the doctor there found out that there was still hydrocephalus in the back of his head and he could not undergo the surgery. He could only drain the fluid in his head by taking medicine. At that time, the doctor told the family members that his situation was not optimistic.

After holding on for a day, Su Hiang passed away peacefully at the noon of Sunday after seeing his wife and children for the last time. Everything happened in merely two days so his wife and children were unable to react to the situation. They often shed tears when they remembered those little things about their husband and father. The family were also helpless as they could not afford his burial and funeral expenses. Therefore, One Hope Charity decided to help them to raise a total of RM52,000 in surgical fee and funeral expenses, hoping that Su Hiang can leave peacefully.

【Khoh Su Hiang was a person who knew everything. As long as you request, there was nothing that he could not solve. His selflessness and dedication to the family and the other villages made him well-remembered by everyone】

Su Hiang was an easy-going can capable “superman”. He was a carpenter when he was young, and he also worked as a renovation worker. He worked hard to raise his children. After he retired some 10 years ago, he stayed at home to take care of his grandchildren.

As he was a person with creativity, skilful and knowledgeable, there was nothing that he could not solve. He was capable in solving problems, capturing wild animals, repairing houses, weeding, repairing household appliances, or even producing creative tools. He was an easy-going and helpful man in the eyes of his family members and other villagers.

Su Hiang and his wife have three children. Their 36-year-old eldest son Khang Loong is an engineer, earning RM3,300 a month. He is married with a five-year-old child. Besides taking care of his own family, he also supports the living expenses of his parents, so he is stretched tight every month. Their 33-year-old second son Khoh Hang Poo is a kitchen assistant and their 29-year-old daughter Khoh Jia Jia works as a clerk in Johor, earning about RM2,500 a month.

His family agreed to fully authorise One Hope Charity to take charge of the fundraising and collect the donations from the well-wishers on their behalf.