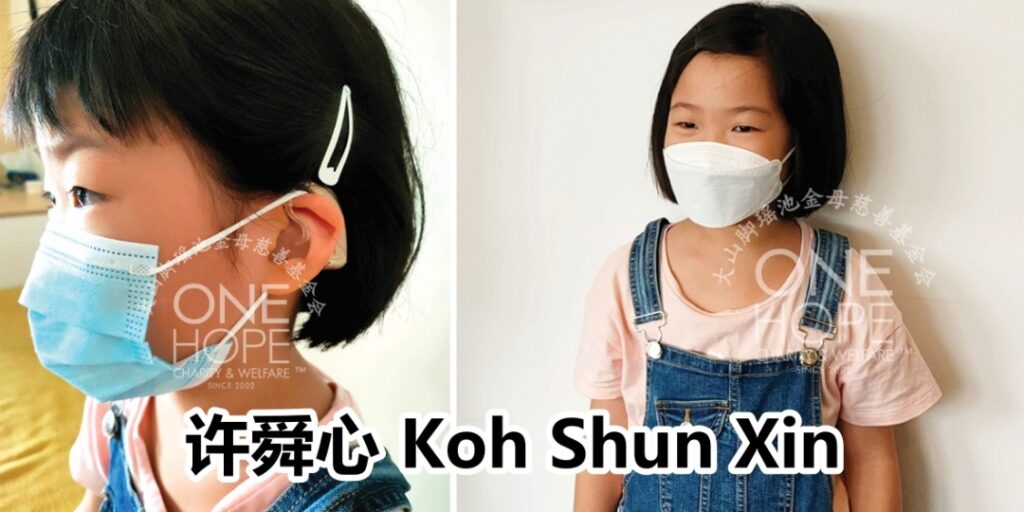 When she was one, she could pronounce “dad”; when she was two, she could hum and sing. However, when she was three, she could read ABD but her pronunciation wasn’t accurate; and at four, she did not respond when her teachers called her from a distance. When she was six, they finally found the reasons behind – her ear’s structure was not fully developed.

10-year-old girl Koh Shun Xin from Klang, could not pronounce accurately when she was small. Her family members thought that it was due to some tongue problems, and they did not take it seriously. When she started to attend kindergarten at four, she met many other children and she started to know how to express herself. She also loved to sing.

The parents brought her to see a specialist, and after examination, it was discovered that the structure of her left ear was not fully developed. Her hearing ability in the left ear left only 20%, while hearing in her right ear left 80%. The specialist then advised Shun Xin to wear hearing aids in both ears.

Shun Xin started wearing hearing aids when she was in Year One. The hearing aids were bought and paid by her family. After putting on the hearing aids, Shun Xin’s hearing improved, but some of the pronunciations were still inaccurate, so she attended speech therapy classes.

【The hearing aid did not help even after the installation of a speaker, the doctor identified that her left ear is suitable for cochlear implantation】

The family thought that Shun Xin’s hearing could improve after wearing the hearing aids, but her mother realised that her daughter’s hearing ability deteriorated last year. During a follow-up visit in October 2021, the doctor suggested that both the hearing aids need to be installed with a speaker. After using it for two months, the hearing aid did not help. After conducting a series of test, the doctor determined that she is suitable to undergo cochlear implantation, and the doctor also recommended to implant a cochlear in the left ear.

At the beginning, the family felt very sad when they knew that their daughter had hearing problem as there was no one in the family that have had such a problem, but they slowly accepted it and accompanied Shun Xin to face her problem, and even the speech therapist encouraged her a lot, so she tried very hard to correct her pronunciations.

Shun Xin is also a positive child. She is smart and realises that her pronunciation is different from the other children, so she always asks her mother to listen to her pronunciation, and then correct it. Although she has hearing problems, but she has very good results in school.

However, the cost of cochlear implantation is RM96,000, and the family can only afford RM13,000, so they approach One Hope Charity for help, hoping that the public can help them with RM83,000 to help Shun Xin recover her hearing and walk out of the silent world.

Her 43-year-old father Koh Kim Leong is a construction site supervisor, earning about RM7,000 a month. Besides supporting the family, he also needs to pay for the living expenses of his elderly parents. Her 42-year-old mother Ong Ai Lee is a clerk. As she needs to take care of her daughter, she can only work half-day. The couple also have a 14-year-old son.

After reviewing the case, One Hope Charity decided to help Koh Shun Xin in raising RM83,000 for her cochlear implant.