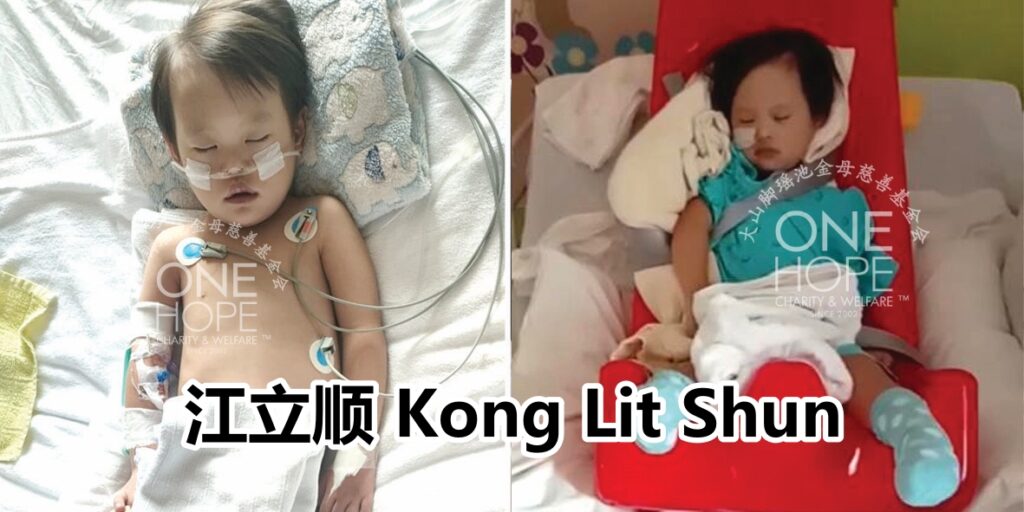 The three-year-old boy’s heart diseased worsened and he went for a surgery. However, he developed epilepsy during the recuperation period after the surgery. The doctor diagnosed him with basal ganglia injury, and he needs to be treated with medication that cost RM50,000.

The heart condition of Kong Lit Shun, a boy from Puchong in Selangor, was found deteriorated after he had a high fever last year. One Hope Charity launched a fundraising for his heart surgery in early January this year. With the generous donations from the well-wishers, little Lit Shun undergone his heart surgery on 11 January.

However, during the recuperation period in the hospital ward, he suddenly developed epilepsy. The doctor gave him emergency rescue and he was later diagnosed with basal ganglia injury, and needed to be treated with medication.

Although Lit Shun was diagnosed with heart defects right after he was born, but his family delayed the plan of him getting a surgery and only brought him for follow-up visits due to their poor financial condition.

And now, he had completed the heart surgery to solve his heart problem with the help of the public, but unexpectedly, he was once again diagnosed with basal ganglia injury, and his family is unable to afford his medical expenses, so they approached One Hope Charity again for help.

According to his medical report, Lit Shun’s epilepsy may be due to his own induced hypothermia response to protect his brain, and patients with basal ganglia injury often experience epilepsy, together with dystonia, muscle rigidity, decreased recognition of facial expressions, and other symptoms. So, the doctor started his medication treatment by using Clonazepam and Baclofen.

After the treatment using the both medicines, Lit Shun’s condition has improved a lot. However, the cost of the treatment is RM50,000, which is an amount that Lit Shun’s parents cannot afford. Hence, they sought another help from One Hope Charity.

His 38-year-old father Kong Wai Leong is an e-hailing driver. He also sells food online for extra income to support the family. He can earn about RM3,000 a month, but after deducting the car loan and the rental fee of their house, there’s not much money left. His 28-year-old Vietnamese mother Le Thi Thuy Diem, works as a waitress in a restaurant with a monthly income of about RM2,000.