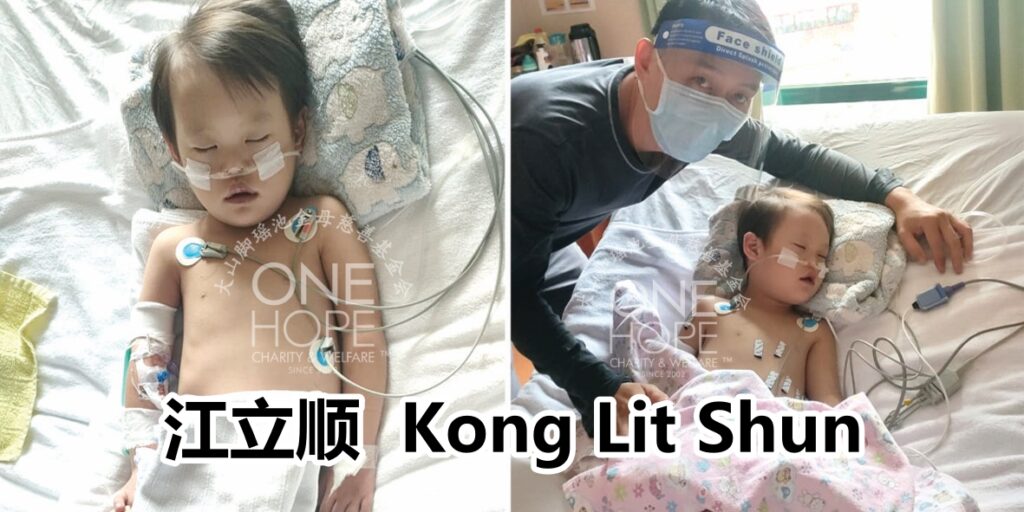 A three-year-old boy with congenital heart disease was admitted to the hospital due to a high fever. It was confirmed later that his heart condition deteriorated and the doctor suggested that the surgery should not be delayed further and it must be carried out as soon as possible. His heart condition might put him in danger at any time, and his parents are hoping for public donations to save his life.

Kong Lit Shun from Puchong in Selangor was born on 2 September 2018, two weeks earlier than the expected due date. On the second day of his birth, the doctor found that his oxygen intake could not resume back to normal. After examination, it was found that there were two holes in his heart, and suffered from tetralogy of fallot (TOF) and atrioventricular septal defect (AVSD).

The doctor then suggested that an operation should be done when the child was one year old, or when his body weight reached 12kg, but due to the financial constraint of the family, the family members decided to delay the plan of him getting surgery, with the hope that they could take the opportunity to earn more money for the surgical fee.

As little Lit Shun grew up, his heart with heart disease could no longer support. His face will turn cyanotic and out of breath, which often made his parents worried.

【He did not recover from high fever and was sent to the hospital for examination. It was confirmed that his heart condition deteriorated and might be in danger at any time】

Lit Shun had a high fever on 1 January this year, and he did not get better after raking medicine. The doctor from a clinic referred him to the hospital for examination, and the result showed that his heart condition deteriorated and he needed to undergo a surgery as soon as possible.

In the past two years, the income of his parents has been affected due to Covid-19. The parents cannot afford the huge amount of surgical fee, hence, they approached One Hope Charity for help.

The boy’s 38-year-old father Kong Wai Leong is an e-hailing driver, who also sells food online to support the family. He earns about RM3,000 a month, but there is not much left after deducting the car loan and the rental fee of their house. His 28-year-old Vietnamese mother works as a waitress in a restaurant earning about RM2,000 a month.

After reviewing the case, One Hope Charity decided to help the boy in raising the RM80,000 in surgical fee. The family agreed to authorise One Hope Charity to take charge of the fundraising and collect donations from the well-wishers on their behalf.