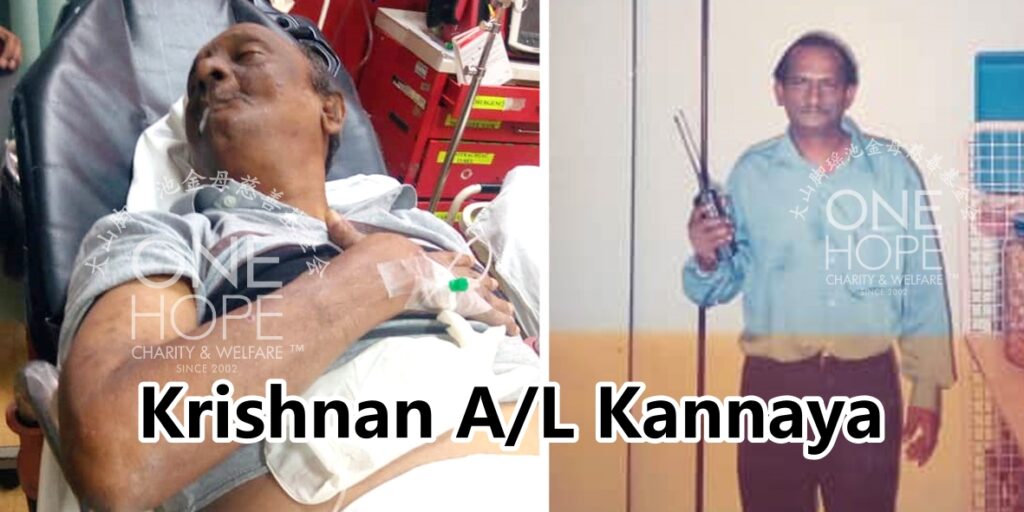 The wife of a septuagenarian man discovered that her husband was not alright on the New Year Day. She kept on calling him but he did not respond, so she rushed him to the hospital. The doctor confirmed that he had a stroke, and the anticoagulant was unable to help him. Hence, he needed a surgery within the golden window, but his wife was unable to afford the medical expenses of RM50,000.

71-year-old Krishnan A/L Kannaya from Bukit Mertajam, Penang and his 72-year-old wife Loganayagi A/P Govindasamy has been depending on each other as no children. The old man injured his leg in an accident more than two decades ago, which resulted him to have mobility problem and was unable to work since then. The couple has been receiving the welfare department’s allowance.

At around 6pm on New Year Day, the old woman found out that her husband’s eyes were shut tightly, and he could not move or respond when she called him. She called an ambulance immediately and rushed him to the hospital.

The doctor scanned his brain and found that he had a stroke, so the doctor immediately prescribed the anticoagulant, but the medicine did not help him in any way.

Stroke patients must minimize the brain cells damage in the shortest possible time to increase the chances of survival. Therefore, the doctor advised him to go to the only specialist hospital on the Penang Island that has mechanical thrombectomy for emergency treatment, but the surgery cost about RM50,000. His family couldn’t afford the medical expenses, hence, they approached One Hope Charity for help.

When he was in his 50s, Krishnan involved in an accident and injured his right leg. He was unable to work since then. He also had a minor stroke seven years ago. Meanwhile, his wife has to use a walking stick to walk due to her old age.

The husband and wife are living with the wife’s 69-year-old brother, Yanavellu A/L Govindasamy, who is unmarried and works as a security guard. Yanavellu has been supporting them financially, as well as taking care of their daily expenses.

Yanavellu was unable to pay for his brother-in-law’s surgical fee, hence he sought help from One Hope Charity. After receiving the help request, One Hope Chrity conducted a review immediately and decided to help Krishnan, so that he can undergo the mechanical thrombectomy.

Fortunately, the surgery could be conducted in time. Krishnan’s condition went well after the surgery. He could not only understand the instructions given by the doctor, but he could also raise his hands and feet.

He only has to be put under observation in the intensive care unit for three days after the surgery, after which the doctor will refer him to a government hospital for recuperation. Although he still can’t speak clearly, but as long as he continues his rehabilitation training, it is believed that he can return to normal, just like how he was before the stroke.

Stroke is an urgent case. A patient needs to undergo mechanical thrombectomy urgently to save the life, otherwise, the patient might be paralysed or even lost his or her life. This is a race against time. A slight moment of delay will affect the patient’s mental and mobility ability. A surgery that performed within the golden window will greatly increase the chances of recovery of a patient.

After reviewing the case, One Hope Charity decided to help Krishnan in raising the RM50,000 in medical expenses. His family agreed to authorise One Hope Charity to take charge of the fundraising and collect donations from the well-wishers on their behalf.

The family agrees to allow One Hope Charity to take charge of the fundraising and at the same time, accumulating the donations from the public. For enquiries, please contact our careline at 016-4192192 or 019-2322192.