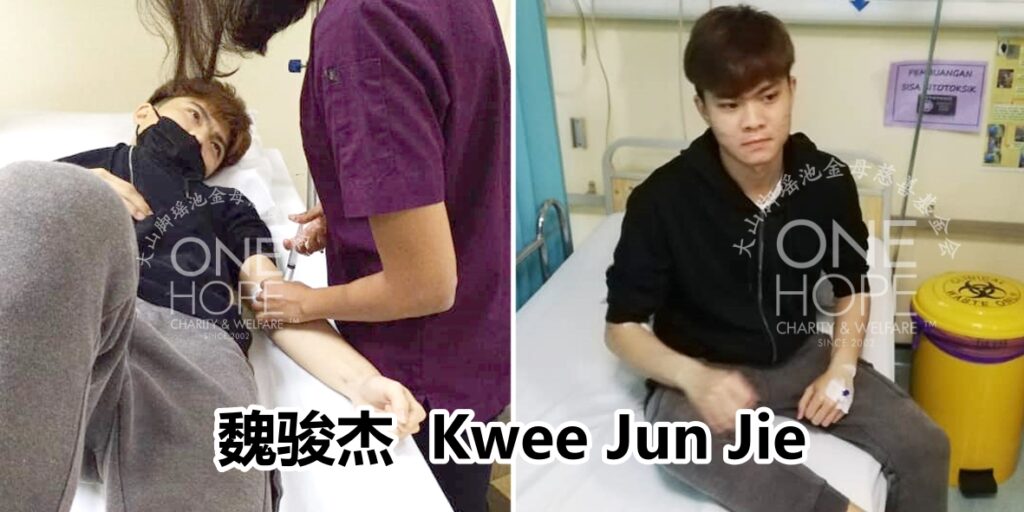 He suffered from Crohn’s disease since seven years ago and his weight once dropped from 60kg to 40kg. The 22-year-old Chinese man needs to rely on long-term medications to control his condition but his parents have exhausted their savings on him. He pleads the public to help him with his medication fee for a year amounting to RM49,470.

22-year-old man Kwee Jun Jie from Negeri Sembilan suffered from frequent abdominal pain and diarrhea since he was 15. The then Form Two student went to the toilet five to six times a day, and his feces were viscous like snot. He also lost his appetite and felt fatigue. His weight dropped drastically from 60kg to slightly over 40kg. His parents brought him for medical treatment for more than a year, but his condition did not improve.

An endoscopy revealed that he suffered from Crohn’s Disease. The seven-year treatment process has exhausted the parents’ savings of more than RM300,000. And now, the son’s condition has improved, and they hope to get help from the public so that their son can continue to receive his medical treatment.

Now, the 22-year-old youth Jun Jie is depressed, decadent and unhappy as he is ill. He hopes that his condition can turn stable so that he can start working and contribute to his family.

【Due to abdominal pain and diarrhea, he was given treatments for haemorrhoids at first, and later was treated for gastroenteritis. He was finally diagnosed with Crohn’s disease – a chronic inflammatory bowel disease】

Jun Jie went to the toilet frequently and suffered from abdominal pain and diarrhea when he was 15 years old. The diarrhea and bloody stools had already affected his daily routine. He didn’t even dare to attend friends’ gathering and sports activities, and he always hid in his room. Diarrhea of five to six times a day had caused him to lost his appetite and weak. He can only rest on the bed.

His parents brought him to seek medical treatment, and the doctor given him treatment for haemorrhoids and a minor surgery was done to remove it but the problem was not solved. His weight dropped from 60kg to 40kg. He later went for endoscopy and his intestine was found inflamed. His condition was unstable and the specialist hospital also ran out of medicines, so he was referred to the Hospital Cancelor Tuanku Muhriz UKM for treatment, and he was diagnosed with Crohn’s disease.

His parents have exhausted their savings for the treatment of their son, they also mortgaged their house to get money for their son’s treatment. After they finished the money, the hospital’s welfare department assisted them to apply for medical expenses aids for two years. The father also accepted the suggestion to try out new medication, so that his son would have a chance to receive free treatment. However, the son’s condition was unstable.

And now, the doctor found an injected medication, which he started for about six months, and it showed positive improvement to his condition. The one-year course of treatment costs RM51,000, so the family pleads the public to help Jun Jie, with the hope that his condition can turn stable, and he can changed to oral medication after that.

His 54-year-old father Kwee Kai Meng was a construction and drainage contractor earning almost RM10,000 a month, so he was able to afford the son’s medication fee earlier. However, his career was badly affected by the pandemic, and his foreign labour permits had expired, so he became an construction site supervisor, with a monthly salary of RM4,000. He also needs to pay RM1,100 for the monthly mortgage, to pay for his credit card debts which was used on his son’s treatments, and other expenses, so he is unable to pay for the upcoming medical bills.

His 52-year-old mother Cheok May Peng is a housewife, and the couple have three children. Their 28-year-old eldest son is a tow truck driver with a salary of about RM4,000 and their 25-year-old second daughter just followed her friend to Singapore and started working as a waitress about two months ago.

After reviewing the case, One Hope Charity decided to assist in raising the medical expenses of RM49,470. The family agreed to fully authorise One Hope Charity to take charge of the fundraising and collect the donations from the well-wishers on their behalf.